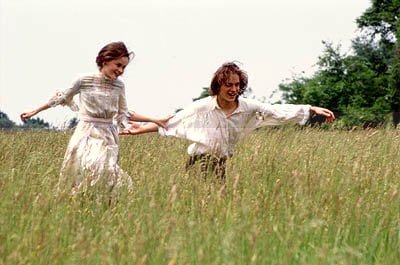 Based on the popular, award-winning children's book by Natalie Babbitt, "Tuck Everlasting" is a fantasy tale centered on pretty, adolescent Winnie Foster (Alexis Bledel), a budding young lady on the verge of adulthood. Her rebellious nature puts her at odds with her parents and, one day, she runs off to the woods near her home. Turned around and lost she meets a handsome young man, Jesse Tuck (Jonathan Jackson), who harbors a secret that may endanger his family's very existence, especially when a mysterious stranger, the Man in the Yellow Suit (Sir Ben Kingsley), arrives in town in search of the Tucks.

Fifteen year old Winnie Foster (Alexis Bledel, TV's "The Gilmore Girls") is suffocating under her society mother's (Amy Irving, "Thirteen Conversations About One Thing") thumb, but piano lessons and corsets don't seem to reign in her wild spirit. When Augusta and Robert Foster (Victor Garber, "Legally Blonde") inform their daughter that she will be sent to a boarding school that 'finishes' young ladies, Winnie runs off into the bordering woods where she discovers "Tuck Everlasting."

When Winnie vanishes, her fretful mother remembers the strange man in the yellow suit (Ben Kingsley, "Sexy Beast") she found her daughter speaking to at the gate. But this man is not responsible for Winnie's disappearance.  He's been on a long journey to find the Tuck family and uncover their secret of eternity. Winnie stumbles across Jesse (Jonathan Jackson, "Insomnia")
drinking from a spring. He tries to get her to leave, but older brother Miles (Scott Bairstow, "The Postman") comes across them and insists on taking her home for father Angus (William Hurt) to deal with.

Frightened Winnie is comforted by kindly mother Mae Tuck (Sissy Spacek) and soon relaxes with the strange family who live a rough life in the dense woods. When Jesse tells her he's 104, she thinks he's joking, but soon she finds herself protecting the Tuck family secret when the yellow-suited man, her father and the town sheriff all converge at the Tuck's log cabin.

"Tuck Everlasting" is a feature length film which tells a short story. Winnie must judge whether Jesse's youthful impulse to have her join him in an eternal life of hiding or Angus' admonition that death should be a part of life is the correct path for her. The simple love is sweet, the Tucks'
back story suitably tragic, but there is never any much-needed tension. Winnie's path is predetermined, the movie's present day bookending obvious and the villain woefully underdeveloped.

Russell extracts that type of earnest, one note performance from his troupe which some filmmakers seem to deem appropriate for children's stories.  It's the type of acting that keeps a hokey story from rising into something more fulfilling. Irving and Bledel are the most successful in developing real characters, attaining an emotional arc to their mother-daughter relationship. Production values are adequate. Cinematographer James L. Carter ("My Dog Skip") frames the action against nature scenes on location in Maryland. Period costume and hair are appropriate.

"Tuck Everlasting" would have made for an average outing for one of the more family-oriented editions of the 1970s' series "Night Gallery." It's largest mystery is the high caliber of talent drawn to it.

Jesse, along with his mom (Sissy Spacek), dad (William Hurt) and brother Miles (Scott Bairstow), has lived in the secluded woods for many years keeping their powerful secret to themselves. When Winnie blunders upon Jesse as he drinks from a hidden spring, she unlocks the mystery that the Tucks have kept to themselves. The spring, found by the family over a century ago, holds the irreversible key to immortality and all the responsibility it involves. The Tucks partook of the magical waters and discovered that it gave them eternal life, but not necessarily eternal happiness.

With Winnie's intrusion, the family has no choice but to keep her a captive until they figure out what to do to protect them and their secret. Although Winnie's parents are frantic with her missing, she comes to understand that the Tucks are kind and generous and selflessly protect her from the curse their magic well has bestowed. The story takes two simple paths from this point. The presence in town of the Man in the Yellow Suit singularly represents the threat to the Tucks, their home and, most important, the magic spring. The family has protected their secret and its source for selfless reasons. They have learned, in many hard ways, that the elixir of eternal life has put them in the position to envy their lost mortality.

The other path is the more philosophical one that deals with Winnie being presented with the ultimate choice. Should she make herself immortal or keep the life that is unfolding before her as a mortal being? Both threads represent subjects that are terrific moral values for older kids and teens and are a learning lesson. This is where the talented cast and crew overshadow the source material making the movie bigger and grander than the fantasy tale can effectively carry.

Director Jay Russell lends the same deft hand that he exhibited in his debut "My Dog Skip." Screenwriters Jeffrey Lieber and James V. Heart, with the Oscar-winning cast of veterans and well-performing newcomers, give the story much more than just a morality play. There is a wealth of fine talent involved, besides Kingsley, Spacek and Hurt - Jonathan Jackson is likable as Jesse; Scott Bairstow, as Miles, gives a trouble, brooding performance as the Tuck who pains the most because of his immortality; Amy Irving gives nuance to her perf as Winnie's domineering mother; talented character actor Victor Garber ("Titanic") plays Winnie's dad effectively in a small role. Ben Kingsley carries the right sinister edge as the MITYS. Hurt and Spacek are anchors as the Tuck parents who help Winnie find her own way in the world.

Excellent tech credits abound with competent lensing by James L. Carter complementing the effective period look, both in production design (Tony Burrough) and costume (Carol Ramsey), that evince that cusp in time (1914) where affluent America abandons its Victorian trappings for the new elegance from Paris just before the beginning of the First World War.

The straightforward, but slight, story is more geared to after school television for kids and it may have missed its real market by way of getting theatrical treatment. I don't know the cost of this lush production, but I don't think it will garner a profit at the theaters, though it should do well in aftermarket rentals, especially for parents looking for solid moral values for their kids.