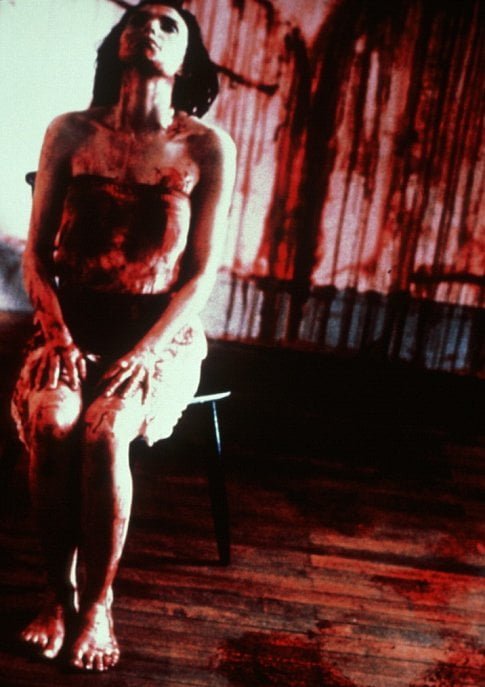 Shane Brown (Vincent Gallo, "Buffalo '66") has a disturbing cerebral impairment - when aroused he wants to literally devour his partner. This affliction is obviously causing problems on his honeymoon in Paris with his adorable new bride June (Tricia Vessey, "Ghost Dog: the Way of the Samurai"). Shane chose Paris, however, to seek help at a libido clinic where an elusive doctor (Alex Descas, "Lumumba") is an expert in the problem due to the advanced illness in his wife Core (Beatrice Dalle, "Betty Blue"), in director Claire Denis' "Trouble Every Day."

Denis and her writing partner Jean-Pol Fargeau ("Beau Travail") take an idea worth exploring and completely lose their way. After the exceptional "Beau Travail," "Trouble Every Day" is a major disappointment.

The film begins intercutting between Core, who's lured a truck driver for a bloody feast along the roadside, and Shane, doting on his childlike bride on the plane to Paris. Core is found by Leo, who comforts her, buries her prey, and locks her up back home. Shane, noticing June's pulsing wrist vein as he kisses her tenderly, locks himself in the lavatory, overcome by visions of an alluring June in bed, drenched in blood.

June tries to find the romance in her honeymoon, but Shane must continually remove himself before consummating the wedding. His lust results in the gory death of a pretty hotel maid. Meanwhile, Leo desperately tries to find a cure while Core continues to kill. When two teenaged boys break into her house, a bloodbath ensues. Moments later, Shane, having tracked Leo to his home address, arrives and meets his feminine counterpart.

Denis is successful in creating a moody melancholy for the film's initial hour or so, but once she lets her love depraved leads meet, her story becomes a hopeless, unsatisfying muddle with a ridiculous wrapup (Shane buys June a puppy and says he wants to go home). Her metaphors don't fit her storyline and events become confused, as if edited (Nelly Quettier, "Beau Travail") at random.

Perhaps Denis's most serious problem is the casting of her lead. Vincent Gallo, while possessing that heroin chic look, is simply too weirdly reprehensible to be believable as a tender lover. When his character states that 'after graduate school, a lot of companies made offers,' the only possible response is laughter. Who would hire this guy, let alone marry him? Tricia Vessey, however, brings a sweetness to her role as the innocent June. Vessey has a gamine-like quality that suggests a young Jane Fonda crossed with Mia Farrow. Her clear blue eyes radiate love.

The gorgeous Dalle plays the succubus as emotionally blank, which is appropriate for her advanced condition. Dalle revels in the gore, giving it an edge of eroticism. She keeps her last victim alive like an ER nurse while she continues to eat him alive. Descas makes Leo tragic with his calming care, but his character is given little opportunity to flesh out.

"Trouble Every Day" does have a standout and that's Agnes Godard's cinematography. Her lighting and framing produce beautiful images - Leo digging in tall weeds, lit in the reddish glow of a car's headlights - Shane's gaze at his wife's nude body in the bath. Original music by Tindersticks underscores the doomed romantic tone.

"Trouble Every Day" is gorgeous to look at, but as paean to love it's bloodless.

Shane Brown (Vincent Gallo) has a rare cerebral disorder that causes its victim to, literally, devour his/her lover when aroused. He travels to Paris to honeymoon with his new, waif-like wife, June (Tricia Vessey), but he has a very different agenda as he seeks the help of the world's foremost expert in the field. A chance encounter with the doctor's wife, also suffering from the disorder, triggers events that may save Shane and his young wife in "Trouble Every Day."

Claire Denis blew me away with her previous minor masterpiece, "Beau Travail," a stark, minimalist homage to Herman Melville's "Billy Budd" set in the world of the modern French Foreign Legion. The crafting of the film, the beautiful use of images (by cinematographer Agnes Godard) and the man versus man story created an indelible impression, making me want to see this auteur's next work. Then I saw "Trouble Every Day."

At the very least I am disappointed in Denis's latest effort. Where the previous film and its story were well-defined and precise - there is no question of who the antagonist/protagonist are - "Trouble Every Day" is a confused tale that never anchors itself, mainly due to the obscurity of the story and a horrible performance by Vincent Gallo, who is thoroughly miscast as tortured Shane Brown. There is a story buried underneath the atmosphere, but shoddy editing, large gaps in the flow of the action (at one point Shane is surreptitiously observes his female counterpart, Cole (Beatrice Dalle), then, suddenly, he is in a death struggle with the woman), and the cloak of ambiguity all work against cohesive story telling.

Vincent Gallo's Shane, as the focal character, has the same sullen, grungy look that he capitalized on in his own "Buffalo 66," but it works against him and "Trouble Every Day." When Shane starts talking about his profession and clients, I'm thinking, "Who in hell would go to this guy for professional advice?" Never mind putting your trust in this weirdo. Just looking at Gallo, I get creeped out. This is a major flaw in "Trouble Every Day." The rest of the cast does OK in their roles, but the script and editing do them in.

There is style in the execution of the screenplay by Denis and Jean-Pol Fargeau, particularly in the dark, moody blood-letting when the beasts are unleash by the psyches of Shane and Cole. (These scenes give oral sex a whole new meaning.) Agnes Godard does lensing duty for Denis and she proves herself to be, again (see "Beau Travail" for its outstanding cinematography), to be an artist with a talented eye for composition. Editing by Nelly Quettier is of the slash and burn variety, making me wonder what film was left on the cutting room floor. There may have been a good film in "Trouble Every Day," but it is not what is on the screen. The tech credits and supporting cast's effort elevate it.