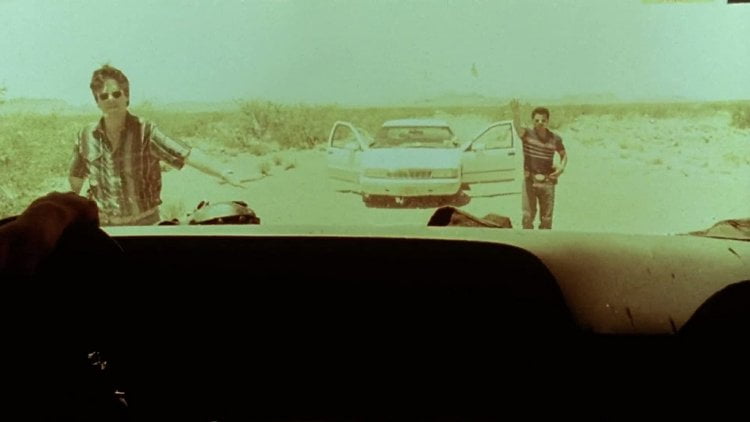 When conservative Judge Robert Wakefield is asked to lead the President's war against drugs, he takes the job seriously even as his predecessor (James Brolin) gives him edgy advice. From this springboard, director Steven Soderbergh takes us on a journey that stops at every link in the drug chain, from Mexican state cop Javier Rodriguez (Benicio Del Toro, "The Way of the Gun") to corrupt Mexican General Salazar, to Californian distributor Carlos Ayala (Steven Bauer, "Primal Fear"), his fingerer Eduardo Ruiz (Miguel Ferrer, "Robocop") and money launderer Artie Metzger (Dennis Quaid) and the NARCs that tail them, Montel Gordon (Don Cheadle, "Boogie Nights") and Ray Castro (Luis Guzman). The circle is closed with the drug user, Wakefield's sixteen year old daughter Caroline (Erika Christensen, "Leave It to Beaver") in "Traffic."

Adapted by Simon Moore from the 1989 British miniseries "Traffik" (by Stephen Gaghan), "Traffic" presents a mosaic of the drug trade as something as inevitable as human greed. Soderbergh gives his audience a lot to think about with this powerful film, while also delivering an entertaining crime thriller.

"Traffic's" 'good guys' are represented at opposite ends of the pole by Douglas' ineffectual drug czar and Del Toro's melancholy Mexican cop. As Judge Wakefield makes the political rounds, Rodriguez encounters General Salazar (Tomas Milian) at a remote drug bust and gets pulled into the nuts and bolts of fighting the Tijuana cartel while trying to keep his partner Manolo (Jacob Vargas) from taking the low road.

In San Diego, Gordon and Castro nab Ruiz who leads them to Ayala, one of the big guys. Ayala's wife Helena (Catherine Zeta-Jones) is left in a financial predicament, discovering her husband's indebtedness to viscious drug lords is jeopardizing their young son's life as well as her cushy lifestyle. A hit man known as Francisco Flores/Frankie Flowers (Clifton Collins, Jr.) is used in both countries. Wakefield's chilly home life (wife Barbara (Amy Irving), a former drug using hippie, is the liberal to his conservative) is contrasted against Caroline's hanging with the philosophical cool crowd that leads her to heroin and inner city slums.

The story is fascinating, peopled with compelling characters. Soderbergh and his editor Stephen Mirrione bring an urgency to this film that makes its 135 minute running time race by. Acting as his own cinematographer, Soderbergh visually separates the Mexican action from its corresponding events in the U.S. by shooting in a sun baked golden hue that prisms into a myriad of colors in monied San Diego before chilling to blue when shifting to the Ohio location of the Wakefield household.

"Traffic" showcases the best ensemble cast of the year. Douglas seems so much more right for Judge Wakefield than Harrison Ford, who walked away from the role. Douglas is believable as a righteous man who takes on the world only to find he can only take on his own family. It's Del Toro, though, who most fully encompasses the circular nature of the beast. He seems to carry the weight of the world on his shoulders, yet has the humor to give over to the battles not worth fighting. Caught between a rock and a hard place, he can speak volumes just staring off into space.

Surprisingly good is Zeta-Jones, who takes her character down very unexpected paths and has the chops to do it convincingly. Cheadle and Ferrer interact to represent the middle layer, with cool Ruiz expressing disgust that Gordon will continue to fight drugs while never making progress. Topher Grace of TV's 'That 70's Show' makes a strong impression as Caroline's boyfriend Seth, the pied piper of bored, privileged teenagers. The cast also includes cameos by Albert Finney as the President's Chief of Staff, Salma Hayek as a drug lord's mistress, Peter Reigert as the Ayalas' lawyer and James Brolin as Wakefield's wry predecessor. Playing themselves are former Massachusetts Governor William Weld and Iowa's Senator Chuck Grassley.

Soderbergh has had a boffo auteur year, first with the mainstream favorite "Erin Brockovich," now with "Traffic," the best American movie of the year.

The world of international drug trafficking is a high stakes and high-risk world where billions of dollars can be made pandering to the addictions of American society. Steven Soderbergh's latest work, "Traffic," explores that world and its players while showing the tragic results of addiction on the family.

Soderbergh, since his radical debut in 1989 with "sex, lies and video tape," has marched to his own filmmaking drummer and, though not always successful ("Kafka"), has always been interesting. He not only proves to be innovative, he can also wow the movie-going public with mainstream stuff, too ("Erin Brockovitch"). On the heels of the latter film, Soderbergh could have rested on his laurels but, instead, hits us with one of the best films released in 2000.

The huge ensemble cast is wonderfully utilized to tell the several different stories that inexorably intertwine and come together in the end. Mexican cop Javier Rodriguez (Benicio Del Toro) works the border around Tijuana with his friend and partner Manolo Sanchez (Jacob Vargas) under Mexico's numero uno crime fighter, General Salazar (Tomas Milian). Their job is to destroy the powerful Obregon drug cartel that is funneling billions of dollars of illicit narcotics into the US.

Across the border, pretty housewife, Helena Ayala (Catherine Zeta-Jones), is shocked to learn that her businessman husband Carl (Steven Bauer) was arrested for drug trafficking. Her greatest fear in life, that she be left a "debt-ridden 30-year old mother of two," is about to be realized if she can't figure a way out. She is in hock to the cartel for millions and her life threatened, forcing the innocent women to become a ruthless businesswoman in her own right as survival, then greed, take over.

Michael Douglas is Ohio Supreme Court Justice Robert Wakefield, a conservative, anti-drug advocate recruited by the President to become the new US drug czar. While Wakefield throws himself into learning all he can about drug smuggling, his teenage daughter, Caroline (Erika Christensen), is a willing participant in the drug culture her father is tasked to destroy. For Caroline, it is a steady downward spiral as she, first, experiments with cocaine and freebase, then gives herself over sexually for the intoxicating numbness of heroin.

Undercover DEA agents Montel Gordon (Don Cheadle) and Ray Castro (Luis Guzman) rep the US involvement in the War on Drugs as they work overtime to build their own case against the Obregon drug cartel. They bust mid-level drug dealer Eduardo Ruiz (Mel Ferrer) and cut a deal to get him to testify against Helena's husband. From here, the stories take on a further complexity as the inexorably intertwine.

Soderbergh musters the best ensemble performance of the year from this big cast that is also supplemented with a plethora of cameo perfs that flesh out the complexly crafted tale. Michael Douglas and Benicio Del Toro give Oscar-worthy performances as Judge Wakefield and honest cop Rodriguez. The beauty about these and other perfs in the film is the depth the actors get to plumb with their characters. Without a great deal of screen time, each actor develops his or her role into multi-dimensional people. This is a combination of fine acting and a deft hand by the helmer.

Catherine Zeta-Jones is cast in the less than glamorous role of a protective mom. The pretty actress is given a character, in Helena, which arcs across the screen. The confused, scared wife and mother is not someone to be taken lightly as she learns of the extent of her financial burden. As Helena takes control of her destiny, we see a frightening ruthlessness develop. When she orders, "I want the principal witness against my husband killed," she knows what she is doing and what she wants. It's the first film where Zeta-Jones isn't just a pretty face and she acquits herself well.

Don Cheadle and Luis Guzman ably man the action north of the border in their own quest to bring down Juan Obregon. They have the more meat and potatoes story as they catch, then turn state's witness, trafficker Ruiz. This part of the tale is reminiscent of Steve McQueen's "Bullitt" as the two cops struggle to keep their ward alive long enough to testify.

There are, as I said, lots of cameos and small roles with the likes of James Brolin, Peter Riegert and Albert Finney showing up. Dennis Quaid is a prominent background character as Helena's attorney and advisor. Amy Irving is effective as the judge's wife, Barbara.

Tech credits are the best. Photography, by Soderbergh himself, is striking as it changes from crisp, colder images when north of the border to soft, sepia tones when south. The rest of the techs are just as notable. Stephen Gaghan's script is as remarkable as the rest of the efforts on this film, weaving a complex tale that loses none of its threads.

Steven Soderbergh gives a double whammy this year and could have simply rode on the popular coattails of "Erin Brockovitch" and its star Julia Roberts. Instead, he produced one of the best, if not the best, American films of year 2000.