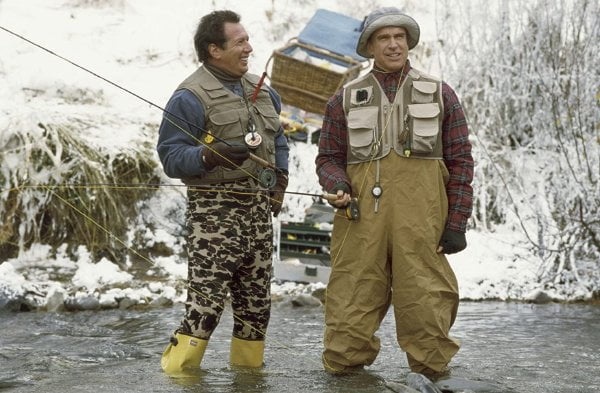 Porter Stoddard (Warren Beatty) is a successful architect married to successful fabric designer Ellie (Diane Keaton) for twenty-five years. They and best friends Mona (Goldie Hawn) and Griffin (Garry Shandling) are about to face marital crises in a film most well known for its torturous path to the screen, "Town and Country."

"Town and Country" has a pedigree befitting it's title with an all star cast photographed by Oscar nominated cinematographer William Fraker and mouthing the words of screenwriter Buck Henry ("The Graduate") under the direction of Peter Chelsom ("Funny Bones"). After years of reports of budget overruns and reshoots and the racking up twelve different release dates, the media has been prepped for Beatty's next "Ishtar." So, is it that bad? The answer is no. But it's not very good either.

The major problem with "Town and Country" is that it's unstructured and random. Stoddard is immediately established as a philanderer, having just bedded a flaky cellist (Nastassja Kinski). Next scene finds him and Ellie celebrating their anniversary in Paris with Mona and Griffin. Then Mona spies Griffin hustling a redhead into a motel and begins divorce proceedings (Buck Henry cameos as both couples' divorce lawyer).

Ellie thinks she's overreacting, but sends Porter to support Mona on a trip to check out her family's Mississippi manse. The two childhood friends end up in bed together, making us wonder why they'd never become a couple to begin with. Back home, their second coupling is interrupted by Ellie bursting in to tell Mona she thinks Porter's cheating on her. Porter goes off on a trip with Griffin to Sun Valley, Idaho to have more comic misadventures with wacky women as Griffin attempts to tell him that he's gay. The four friends, along with every woman Porter's dallied with, all end up back in New York City somewhat happily ever after.

Although the film begins promisingly, resembling a Woody Allen take on New York City wasps, too many strands drift off into nowhere. The Stoddard household is huge, containing two adult children (Josh Hartnett, "The Virgin Suicides" and Tricia Vessey, "Kiss the Girls"), their colorful bedmates and a maid who's just imported her shirtless boyfriend from the rain forest back home. After an amusing early scene that has Porter overhearing three bouts of lovemaking while in search of a nocturnal snack, the six supporting players are dropped except for an out-of-nowhere appearance by the formerly forgotten son. Porter's romantic misadventures with women (other than Mona) are equally mishandled. Once the marital discord begins, the film seems as if it was edited with a machete, stopping and starting, never regaining its rhythm.

While Beatty gets off a few tart observations, his character is mostly passive and bemused. Maybe we're supposed to feel sympathy for an adulterer who doesn't initiate his own sex romps? Keaton's Ellie has a trusting nature that's a result of her own self involvement resulting in an unlikable character. Hawn smartly recycles her mature sex kitten wives of "The Out of Towners" and "The First Wives' Club" while Shandling's relegated to true second banana status. Kinski is bland and unmotivated. Andie MacDowell takes a weirdly unappealing role and does what she can with the screenplay's most bizarre subplot, which finds Charlton Heston as her rifle toting, billionaire daddy and Marian Seldes as her alcoholic, wheelchair-bound, foul-mouthed mother. Heston and Seldes are fun, as is Jenna Elfman as a Sun Valley bait and tackle salesgirl who brings Porter and Griffin to a Halloween party.

Oscar nominated cinematographer William Fraker gives the film a nice look, but director Chelsom shows none of the quirkily and blackly humorous depth he brought to films like "Hear My Song" and "Funny Bones." The script is this film's weakest link - it's telling that most of the (few) laughs come from old-fashioned physical slapstick and the sight of Beatty in a bear suit.

While "Town and Country" isn't exactly painful to sit through, it mostly just lays there.

Warren Beatty, Diane Keaton, Goldie Hawn and Gary Shandling star as a pair of married couples whose complacent lives are about to be shaken up in director Peter Chelsom's version of the classic romantic, screwball comedy in "Town & Country."

The drawing room farce of the 30's dealt with sexual innuendo and relied on wit and a great deal of commotion and noise to place the viewer in the thick of the duplicitous romantic action. Back then, impossibly wealthy scions of society, with too much free time, would get themselves wrapped up in all sorts of sexual peccadilloes with spouses and lovers, only to have everything come out all right in the end - see "The Philadelphia Story" for a great farce. "Town & Country" has the impossibly wealthy protagonists with too much free time - the kind of people that have jobs but never seem to work - and sexual misconduct on several levels. But, there is almost no life to original script by Michael Laughlin and Buck Henry and this is "T&C's" downfall.

There is, obviously, a great deal of Hollywood talent, in front of and behind the camera, involved in "Town & Country," but, without a likable or, at least, interesting story to carry through their efforts, it is all for naught. And, that's what we get here - naught.

Porter Stoddard (Beatty) is a high-powered New York architect with a very good life indeed. His 25-year marriage to Ellie (Diane Keaton) appears, on the surface, to be perfect. But, there are cracks just below this pristine surface. His wife is suspicious of his whereabouts, his kids don't need him and his best friends, Griffin (Garry Shandling) and Mona (Goldie Hawn), are in the midst of a divorce. Porter tries to get control of his life before it is too late, but like a man fighting against quicksand, his struggle just sinks him deeper.

At the 90-minute mark of "Town & Country" I asked myself, "What's the point?" I wasn't entertained, I laughed three times - over silly little pratfalls - and spent most of the film marking time 'til the end. Warren Beatty wanders around with his character in a bewildered fog, making problems for himself by thinking with a part of his anatomy other than his head. Keaton's Ellie is an empty headed flake who can't see the obvious as Porter screws around on her. And, as you get to know them, who would want friends like Griffin and Mona?

The supporting cast is given nothing to do and, sometimes, does harm to the film, given the material they are forced to use. Nastassja Kinski plays a cellist with whom Porter has a fling. The actress, who has, eerily, failed to age over the years, is miscast as the air-headed musician and the character doesn't belong, anyway. Jenna Elfman is a sweet, but smart, ditz who joins Porter and Griffin on one of their tacked on misadventures. Andie MacDowell is absolutely painful to watch as a wealthy heiress (is there any other kind in this movie?) who comes on to Porter. The saving grace is a pair of quirky perfs by Charlton Heston and Marian Seldes as MacDowell's very strange parents.

Glib rationalization of infidelity, like, "If he doesn't speak English, it doesn't count," are a staple for the screenplay. The morality of the film seems to be, if you can get away with it, go for it. The cast of characters are mostly people you wouldn't want to know, never mind befriend. The actors do their best, but are hamstrung by the weak material. Helmer Chelsom, who made the outstanding, offbeat comedy "Funny Bones," is mired in the mess of a script and never puts his imprint on "Town & Country."

The production values are high, as one expects from a big budget Hollywood film. But, the opulent sets by Caroline Hanania, lavish wardrobes by Molly Maginnis and top-notch photography by William Fraker cannot save "Town & Country." The film has had a long list of production and distribution problems and it might have been better, for me anyway, if Hollywood just said no to this movie.