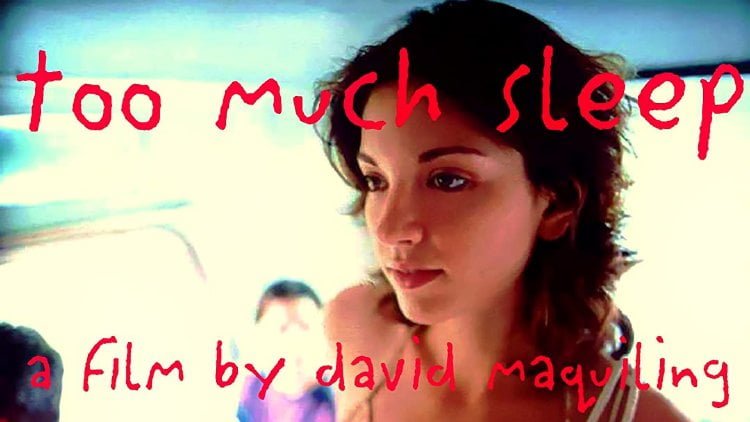 Jack Crawford (Marc Palmieri) is a 24-year old night security guard who lives at home with his mother. One morning, while heading home on the bus, he's checking out a pretty young woman when his handgun is stolen. Desperate, Jack enlists the help of a local can-do guy named Eddie (Pasquale Gaeta) whose advice sends the slacker into a weirdly populated underworld in "Too Much Sleep."

Security guard Jack (Marc Palmieri) loses his gun as the victim of a scam one morning while admiring a pretty girl (Nicol Zanzarella) on the bus. Distraught, Jack turns to his buddy Andrew (Philip Galinsky), who puts him in touch with his Uncle Eddie (Pasquale Gaeta), a non-stop talker and apparent authority on just about everything in "Too Much Sleep."

Writer/Director David Maquiling has created a terrific character in Eddie, who gets Jack into some humorous situations - for about the first thirty minutes of "Too Much Sleep." Once Jack's been given the tip to go to 145 Withers, a house party peopled with one forced wacky weirdo after another, Maquiling's film derails and can barely sustain interest for it's remaining hour.

Pasquale Gaeta is the film's saving grace. A self important little man who begins every ramble with 'But let me tell you something,' Uncle Eddie is a unique screen character who's advice runs from the actually useful to the seriously demented. In the film's funniest scene, Eddie manages to bring Jack right to the older woman half of the team who scammed him. As Eddie chases the woman through her neighborhood, she apprehends him, spraying him in the face. 'That's Jovan Musk at $15.99 a bottle, so you can see I mean business!' she tells him, before directing him to that address.

Downhill from here, Jack meets assorted weirdos and spends an inconsequential night with the younger con artist that leads to a meeting with a man carrying a paper bag, presumably containing his gun, in a bus station. After a chase that ends with Jack beating the man senseless with a pink plastic bat, that bag's no where to be seen and the gun's not mentioned again. A final scene on Eddie's front lawn allows for one more bout of comedic philosophizing from Gaeta.

Maquiling's writing, while offering some truly pleasurable bits of business, can't sustain itself for a feature length film. While his leads, especially Gaeta, are good, much of his supporting cast are amateurish. Overall, "Too Much Sleep" tries too hard to be whimsical.

First-time feature helmer David Maquiling directs his own script in homage to Martin Scorsese's own nightmare journey, "After Hours." The hapless schmuck that the story hangs upon, Jack, has one ambition in life - to sleep. His night watchman job allows him that, but does not prepare him for the world he is about to enter after his revolver, unregistered, is stolen. The neighborhood BMOC, Eddie, was deputy county clerk for 19 years and knows the right people to ask about such things as stolen guns.

Eddie's advice and directions lead Jack into an increasingly bizarre world. He gets "maced" with Jovan Musk by his principle subject, Judy (Judy Sabo Podinker), when he confronts her over the gun. Eddie tells him to "go to 145 Wicker - but, I ain't promising anything." Jack does and meets a variety of weirdos from a bartender who comes on to him to a psycho male nurse and a loony philosopher - but, no gun. His continued journey through life's underbelly bears him nothing more than a string of more strange characters. It is all about Jack finding himself, in the end, and not the gun.

"Too Much Sleep" starts off amiably enough with its main character, Jack, looking only to catch the maximum Z's out of life. Marc Palmieri is deadpan in his delivery of his slacker Jack persona and it works out for a short while. As he encounters an increasing number of oddball characters while searching for the gun, the film loses its quirkiness and just dabbles in weird behavior. As interest in the revolver is supplanted by other things in Jack's life, our interest is the film wanes, too.

The cast is made up with a good-natured collection of dedicated amateurs and semi-pros but none, with one exception, stand out. Pasquale Gaeta cuts a funny path as the Joe Pesci-like Eddie, spouting his knowing advice and guiding Jack through the maze of illicit weapons and sleazy people. He is uniformly amusing as Jack's muse.

The screenplay, by the director, pushes hard to get a rise out of the quirk meter and succeeds for the first half, but slowly loses its steam in the second. It's a decent calling card to get the young filmmaker his foot in the door of bigger budget mainstream film. "Too Much Sleep" is amiable, but not enough.