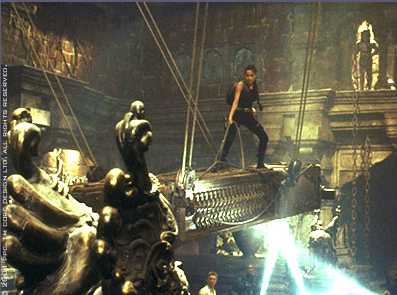 Lady Lara Croft (Angelina Jolie) is a rich and pampered heiress whose hobbies are travel, photography, foreign language and visiting remote archaeological sites. But this is just camouflage for her real passions: raiding tombs, foiling bad guys and, now, saving the world in the long-anticipated "Lara Croft: Tomb Raider"

Lady Lara Croft (Angelina Jolie, "Gone in 60 Seconds") lives in a mind-numbingly huge British estate with her butler Hilary (Chris Barrie of the British series "Red Dwarf"), who attempts to get her to dress more femininely, and personal techno-geek Bryce (Noah Taylor, "Shine"), who devises things like a huge killer robot (straight out of "Robocop") to keep Lara at the top of her game. That game is tomb raiding for antiquities, a career taught her by her beloved, now deceased dad (Jon Voight, Jolie's real father). A once-every-5,000 years convergence of the planets combined with the discovery of a ticking 'key' sets Lara off on her latest worldwide adventure to stop the evil Illuminati from stealing the power of time itself in "Lara Croft: Tomb Raider."

Having never played the videogame, I have a question - is the name Lara Croft code for Large Cups? Angelina Jolie, with the help of some bust boosting, personifies the vidgame heroine - a tough, motorcycle riding chick with an inhuman figure encased in tight clothing and a personal arsenal. She can apparently hear the ticking of a clock encased within a stairwell from 100 yards and a sound sleep, pull in favors from secret ops groups and beat the living daylights out of a score of men firing a hail of bullets at her without suffering a scratch, yet doesn't have the sense to employ Bryce to protect the key to earth's destruction from being stolen.

Screenwriter Michael Colleary ("Face/Off") has provided an idiotic premise that trots Lara to Cambodia (where huge stone temple creatures come to life only to be shattered like clay pots by a bullet or two), Venice (for no reason whatsoever other than to have a conversation with bland bad guy Manfred Powell (Iain Glen, "Beautiful Creatures")) and Iceland (to look cool dog-sledding
before an inane climax right out of "The Avengers"). His one good idea is to surprise the audience when a second shower scene doesn't pan down to the figure we expect.

Cinematographer Peter Menzies Jr., blessed with these exotic locations, serves up a muddy looking, visually bland film. Simon West's ("Con Air," "The General's Daughter") direction is so flat-footed, that boredom sets in just as Lara's adventure is beginning. Not a single member of the cast is given an opportunity to breath life into their characters, although Daniel Craig ("I Dreamed of Africa") shows a glimmer that somehow got past West as Lara's former boyfriend, mercenary tomb raider Alex Marrs.

Sitting through "Lara Croft: Tomb Raider" had me wishing I'd brought a PlayStation to the theater because the entertainment sure wasn't on the screen.

Unfortunately, there is little more than a video game in this star vehicle for Oscar-winner Jolie. Angelina does a fine job with her extreme physical performance, doing many of her own stunts. She is capable, smart and sassy and shoots really big guns. Director Simon West and cinematographer Peter Menzies work hard to keep the statuesque actress front and center for most of the film. There isn't much depth to Jolie's performance, thesp-wise, but she cuts a good action figure.

As if anyone that is going to see "Tomb Raider" really cares, there is a story here. Every 5000 years, all of the planets in our Solar System come into alignment at the precise moment there is a solar eclipse. At that instant, when the eclipse is full, a power will be unleashed that will give man the power of God, the power to control time. The Illuminists, an ancient cult that has prepared (apparently for 5000 years) for this moment, need to find the two halves of "the all-seeing eye" and join them at the height of the alignment to take command of time.

Lara's dad, Lord Richard Croft (Jon Voight), it turns out, was one of the Illuminists, but secretly worked to stop the cult's plan and save mankind. His mysterious death leaves Lara in a quandary until he returns to her from the grave in the form of a read-this-after-I'm-dead letter. The clues he leaves point her to the plot of the Illuminists and daddy appoints Lara to take on his quest and put a stop to the menacing scheme.

Lara has to contend with bad guys, of course, and is prepared to go toe-to-toe with the cult's chief henchman, Manfred Powell (Iain Glen), a suave, handsome, ruthless adventurer who has plans of his own for the all-seeing eye. It's a race against the clock, the planets and Powell as Lara must travel to the corners of the Earth to find the two pieces of the ancient triangle before the bad guys do.

The cast is a bland mix of unexciting characters that have little do except help or hinder Lara. Noah Taylor (the young David Helfgott in "Shine") is Lara's sidekick, Bryce, who is supposed to be some kind of techno-geek, but comes across as just a plain geek. Iain Glen is a good-looking villain and I thought a love/hate relationship was going to develop between him and Lara. It turns out to be hate only. Chris Barry is given little to do as Lara's loyal butler, Hillary, wasting what could have been a good character. Daniel Craig, as Croft's once-colleague/now-adversary Alex West, is underutilized. Finally, in typical Hollywood style, Jon Voight, Jolie's real-life dad, gets work playing the same role in the movie. (One editorial note: Jolie's breasts should have received their own billing, they are so prominent in near every scene, with a tantalizing hint of exposure in more than one scene.)

Production is uneven. There are lavish sets throughout, but there is a fakeness to most of it that makes me think "sound stage" not "far-flung ancient archaeological sites." The fight sequences are pretty good and will entertain the fans as Jolie brings Lara Croft to life. A whole passel of writers were involved in creating the story and the script and it feels stilted. It's a succession of action-story-action-story sequences that have the feel of the video game that spawned it all.

Fans will be in heaven as they watch the personification of their electronic idol on the big screen. For the rest of us, go to another movie. It's pretty much what I expected.