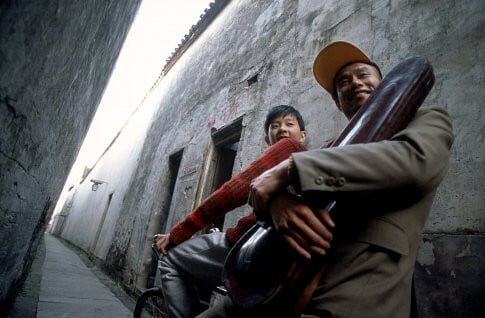 A not-too-bright but loving father, Liu Cheng (Peiqi Liu), works as a cook in a local restaurant while raising his violin prodigy son in northern China. He realizes the incredible talent of the boy, Xiaochun (Yun Tang), and makes plans to move to Beijing so the 13-year old genius can get into the state's prestigious music academy in director Chen Kaige's "Together."

Young violin prodigy Liu Xiaochun's (Yun Tang) simple country father Liu Cheng (Peiqi Liu, "Shadow Magic") takes him to Beijing to audition for a prestigious school. Cheng overhears Professor Jiang (Zhiwen Wang, "The Emperor and the Assassin") declare Xiaochun the best, even though they placed the child fifth because there was no money behind him. Determined that his child succeed, Cheng pesters Jiang into taking Chun on as his student, but when he observes a slicker Professor, Yu Shifeng (director Kaige Chen), getting Jiang's reject into the concert circuit, he changes strategy. Chun is surprised to realize that the fast-track may jeopardize the thing he didn't realize he wanted the most - that he and his father remain "Together."

Cowriter (with Xiao Lu Xue)/director/star Chen Kaige ("The Emperor and the Assassin," "Killing Me Softly") creates an allegory for the old, traditional and new, modern Chinas while assuaging his guilt for having been forced to denounce his own father during the Cultural Revolution (a period he also addressed in "Farewell My Concubine"). While "Together's" themes of artistic purity versus commercial success are handled simplistically and perhaps unrealistically, there is no denying the emotional engagement of the film.

'Chun,' as Cheng calls him, plays beautifully for Jiang, who shuffles about his tatty, cat filled apartment doling out commands but offering little in the way of instruction. His rumpled demeanor represents an affectionate father figure and safe haven although Chun is smart enough to also recognize a lack of courage in his hermetic lifestyle. Chun's playing is overheard by Lili (Hong Chen, the director's wife), a call girl who lives above Jiang's courtyard whom Chun had already observed clinging to favored client Hui (Qiang Chen, "Devils on the Doorstep") at a city hotel. Chun plays for Lili, earns a nice tip for doing so and becomes friendly with the sophisticated young women who is naive in matters of the heart. Lili becomes as instrumental in Chun's schooling as Jiang once she's scaled the hurdle of Cheng's disapproval.

Cheng, a revered cook in the provinces, is reduced to peddling fast food and working construction jobs in the big city to pay his and Chun's way. He blusters his way into Yu's luxurious apartment and wins over Yu's wife (Hye-ri Kim) with a heartbreaking tale. It's secret will be wielded by Yu at a climatic moment with Chun, whom he agrees to take on as a pupil, pitting him against his own daughter Lin (Qing Zhang) for a prized slot in an international competition.

Chen coaxes a nice performance from non-actor Yun Tang who he discovered at a violin competition, while limiting his own to an appropriately cold restraint. Peiqi Liu gives the film its heart, however, in a performance that recalls Chaplin's Little Tramp. Peiqi is all bumpkin gumption, an almost slapstick character in a baseball cap. Both he and Yun are nicely supported by Hong in a characterization that represents both Chinas - she's hard-edged angling from money from wealthy men, but all she really wants is love. Zhiwen Wang is funny, warm and affecting as the old world professor who favors true musicianship over fame and fortune. Also noteworthy is Qing Zhang who simmers with resentment at Chun's favor with her father until defeat gives her the inner revelation to succeed.

Cinematography by Jiongqiu Jin and Hyung-ku Kim shines most in a sequence of close-up activity in Jiang's apartment that creates a mood of glowing nostalgia. Music is, of course, wonderful and features Tchaikovsky's "Violin Concerto."

"Together's" operatic climax is a bit too fuzzily sentimental to be believed but Kaige crosscuts effectively with the satisfying triumph of a supporting character.

This is a story that you have seen before in such films as "Little Man Tate (1991)" where the average/simple/working-class/poor/you-name-it parent must cope with his/her child's brilliance while trying to maintain some semblance of authority and control over the youngster. Said parent must deal with the exasperated impatience of a genius youngster while try to do the right thing by the child.

In "Together," Cheng obviously adores Xiaochun and is ready and willing to pack all of their meager belongings and every cent they have (hidden in Cheng's cap) and head to Beijing. Cheng's initial plan is to enroll the boy in the Beijing academy and get him to the point of fame and prosperity. They attend auditions for the state-run music school and Xiaochun gives an impressive performance but politics and payola keep the boy out. Cheng overhears a conversation between two men, one a music teacher, praising his son, and he seeks out the teacher, Professor Jiang (Zhiwen Wang), and hires him to tutor Xiaochun.

The slovenly Jiang has the boy play at length but also uses him as a servant, causing an angered Cheng to fire the instructor. Meanwhile, adolescent Xiaochun is heading straight for puberty and he notices his sexy neighbor, Lili (Hong Chen). She hears him practicing his violin and orders the youngster to come over to play for her, tipping him well for his effort. A friendship, of sorts, develops between the two as Lili lives a fast paced life, running with a married man, while Xiaochun quietly adores the beautiful older woman.

Cheng, a true innocent and desperate to find a replacement teacher for his son, breaches societal protocol and goes to the home of a famed music teacher, Yu Shifeng (Chen Kaige), and asks him to teach his son. Reluctantly, but intrigued by the boy's obvious talent, Yu auditions the boy and invites him to come live with the Yu family while in training - to the detriment of Yu's own talented daughter and student, Lin (Qing Zhang). All of these varied story lines come together, in the end, in a moving (if predictable) way as the son comes to realize the importance of his father's love and dedication. This father/son tale may be a cliché but it is beautifully rendered one by helmer Chen Kaige, with brilliant music, fine acting, good techs and a terrifically sympathetic performance by Peiqi Liu as Cheng. I had tears in my eyes by the end of "Together" because of his moving performance, especially when the whole story is tied together in the finale.

Real-life prodigy Yun Tang plays Xiaochun and, while he is obviously not an actor, his musical abilities are used effectively and lend the film an additional level of realism. Hong Chen as Lili is sexy, pretty and smart, but she lives for the moment, sometimes to not such good results, at least for her. Xiaochun idolizes Lili but she doesn't realize the effect she has on the pubescent boy's libido. He willingly sacrifices his own future, on a whim, just to give Lili what she wants. Zhiwen Wang as Professor Jiang is a quirky, offbeat character that is also influenced by his association with Cheng and Xiaochun and eventually changes his sloppy ways, though his storyline is abruptly dropped in an unsatisfying way. The helmer does double duty, and well, as the sophisticated and demanding Yu.

Techs are superb with camera work, by Jiongqiu Jin and Hyung-ku Kim, costumes by Yeong-su Ha, and production design by Juiping Cao and Luyi Liu - ranging from Cheng's humble but clean rooms to Lili's modern pad to Wu's luxurious abode to the streets of Beijing - all expertly done. Chen Kaige shows his expert leadership as he crafts an oft-told story and gives it freshness, combining East and West in what is a truly universal tale of love between a parent and child. The original music by Ling Zhao is beautifully supplemented with such classical works a Tchaikovsky's "Violin Concerto" and Vivaldi's "The Four Season." The performances of these works, especially by Yun Tang, are an epiphany. Some may find "Together" to be melodramatic treacle but, particularly because of Peiqi Liu's touching performance, that's not such a bad thing.