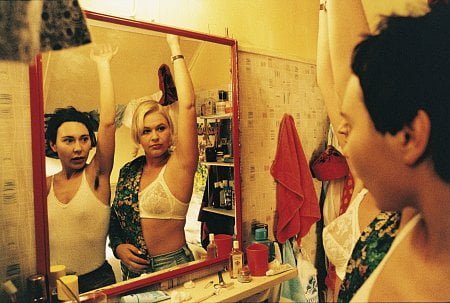 When Elisabeth's (Lisa Lindgren) husband Rolf (Michael Nyqvist) hits her for the second time, she bundles up her kids Stefan (Sam Kessel) and Eva (Emma Samuelsson) and moves into her brother Goran's (Gustaf Hammarsten, "The Best Intentions") commune. The wildly divergent commune members and the people Rolf meets now that he's alone will take each member of this family on a unique journey that ultimately brings them all back "Together."

Writer/director Lukas Moodysson ("Show Me Love") creates a warm comedy about a group of people forced to reconsider preconceived notions and how only those willing to take a chance on change are able to make the connections that count in life. While Moodysson doesn't give equal weight to all his characters, making his film's structure unbalanced, his fine cast and true human observations are ultimately what count.

Goran tries to be all things to all people, including his sex-mad girlfriend Lena (Anja Lundqvist), whose proclamation of and action upon their 'open relationship' is slowly driving him mad. Medical student Lasse (Ola Norell) humorously speaks his mind, summing up situations in a no nonsense manner that, while it may sting, is always on target. His ex-wife Anna (Jessica Liedberg) embraces meditation, hairy armpits and lesbianism, while homosexual Klas (Shanti Roney) yearns for nothing more than to be a housewife for Lasse. Erik, (Olle Sarri) a strident member of the Communist, Marxist, Leninist, Revolutionary League, argues that his welding job keeps him from 'rotting at university.' Signe (Cecilia Frode) and Sigvard (Lars Frode) are hippies who reject meat and materialism.

When Elisabeth and her kids arrive from the bourgeois world (just as Lasse's dropped his pants in protest of Anna's bottomless kitchen attire!), everything shifts. Anna immediately sets her sights on Elisabeth, loosening her up and strengthening her resolve to stay away from Rolf. The kids suffer until Stefan connects with Tet (Axel Zuber), Lasse and Anna's Vietnam War named son, over forbidden Legos, war games and 'playing Pinochet' and Eva begins a tentative romance with Fredrik (Henrik Lundstrom), the equally four-eyed outcast son of next door's disapproving neighbors Margit (Therese Brunnander) and Ragnar (Claes Hartelius). Meanwhile, after a disastrous evening with his kids which ends with him drunk in prison, Rolf quits the booze and strikes up a friendship with lonely widower Birger (Sten Ljunggren), who urges him to woo back his wife.

Moodysson's nostalgic look back at 1975 Stockholm of 'ugly clothes and bad music' proves that styles may change, but people pretty much stay the same. His gradual reconfiguration of the Tillsammans household is canny and uplifting and his cast are uniformly excellent. Except for its small imbalances (the action shifts away from the household for too long a stretch, Signe and Sigvard exist only to leave in protest), the film's lone drawback is the amateurish cinematography by Ulf Brantas ("Show Me Love"). Brantas zooms and pans like someone with their first videocamera, although editors Michal Leszczylowski and Fredrik Abrahamsen make the most with the footage they have.

"Together" is a life-affirming comedy.

When the Vietnam War ended in 1975, it also spelled the end of the hippie movement in America forever. But, in Sweden, freethinking, free-loving idealism still lives and communes still flourish. At one such cooperative, the delicate balance needed for a large number of people, all very different, to live together in harmony is strained by the arrival of a family of outsiders in the Swedish comedy “Together.”

When the leader of the Tillsammans (Together) commune, Goran (Gustaf Hammarsten), gets a plaintive phone call from his sister Elisabeth (Lisa Lindgren) he can’t help but to take her and her kids into the house. Her husband, Rolf (Michael Nyqvist), has a drinking problem and, drunk again, he struck his wife in the face. Hard. Goran picks up Elisabeth and her two kids and drives them, in a VW microbus of course, back to Together for safety. Once there, the stable dynamics of the group home go completely a kilter as the family’s arrival disrupts the delicate social balance – not that things weren’t about to go awry anyway – in the house.

Goran is coupled with a sex-crazed, free love advocate, Lena (Anja Lundqvist), who decides to test her significant other’s idealism and beds down, with vocal verve, the commune’s irritable, radical, resident Communist, Erik (Olle Sarri). The cynical med-school member of the house, Lasse (Ola Norell), has to contend with his ex-wife Anna (Jessica Liedberg), who divorced him to become a lesbian. They also have their 8-year-old son, Tet (Axel Zuber), to raise amidst the varied group of freethinkers. Lasse has to cope, too, with Klas (Shanti Roney), a homosexual member of the household who has a crush on the doctor-in-training.

When Elisabeth and her children, Eva (Emma Samuelsson) and Stephan (Sam Kessel), invade the collective with their own set of middle-class problems and lifestyle, they introduce bourgeois elements into the communal. Two of Together’s most idealistic and fanatical members, Signe (Cecilia Frode) and her stubborn husband Sigvard (Lars Frode), are appalled by the intrusion and the disruption the outsiders cause. When their idealism is questioned - Is Pippi Longstocking really a capitalist? Is a little meat with a meal so bad? Or, is TV really so evil? – the couple decides to leave for another commune where their values will be kept intact. Together begins its metamorphosis from the group concepts of the 60’s to the self-centered cynicism of the 70’s.

“Together,” at its core, makes interesting social statements about the state of mind of the world in the 70’s. The controversy of the Vietnam War is over, but the impact of that conflict and its effect on the world has made impossible the continuation of the altruism spawned in the previous decade. World society, now free of the political mess in Indochina, is taking on a self-awareness that spawned the “me” generation and the good of mankind takes a back seat to individual self-indulgence. Sophomore helmet/writer Lukas Moodyson, from a narrative viewpoint, does a fine job of recreating the philosophical transformation as seen in the tiny microcosm of Swedish communal society.

Technically, though, the film is second rate and diminishes the subject matter. Most annoying is the hand held, jerky camera work by Ulf Bantams. The lender was shooting for a documentary look with his rapidly moving, erratic camera but that is no excuse for bad photographic composition and look. At times the filming takes on the feel of an amateur given his first video camera and told to go shoot a feature film. Other techs are routine, except, possibly, for the costuming by Matte Muller that belies the obvious small budget of the film. One amusing distraction is the wig that character Klas is saddled with. It looks like he raided his mother’s wig supply - blindfolded.

The ensemble cast is large with all of the actors (about 18 in all) each given some level of shrift throughout the film. Notable are Gusted Hammarsten as the kindly doormat Goran and his sister Elisabeth (Lindgren) who is attracted to the freedom of Together but still yearns to have a stable home life. Everyone in he cast delivers the good.

The combination of thoughtful period slice-of-life and the amateur-feeling production make me have mixed feelings about “Together.” I like the idea but, regretfully, have major problems with the execution.