To Be and To Have (Etre et Avoir) 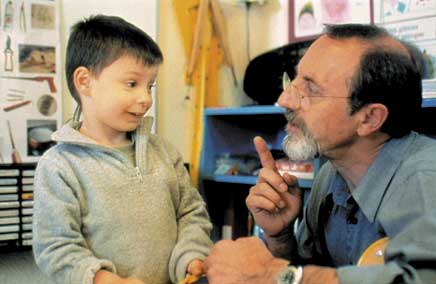 From December 2000 through June 2001, French documentarian Nicholas Philibert spent ten weeks with his crew of three capturing the life of a one room school in the farming region of Auvergue. Schoolteacher George Lopez, a twenty year veteran of the school, conducts a class of about a dozen students ranging from four year olds to those about to enter middle school in "To Be and To Have."

Philibert and his crew remain invisible throughout most of the this film's running time letting a way of life that is surely short-lived speak for itself. The film is cyclically chaptered just as a school year is divided by seasonal change, although nature's pattern is two beats off with fall bringing a beginning and summer an end. In Auvergue, man's connection to nature also means his livelihood and Philibert makes the associations visually, starting his film with what at first seems an odd shot of cows being herded in gently swirling snowflakes. A transition to tortoises traversing the floor of the emptied classroom is the only shot in the film which appears to have been staged.

Lopez is an old-fashioned disciplinarian, with children lining up behind their chairs before he instructs them to sit. He uses the power of his soft voice to demand attention and exhibits incredible patience and ability. The man is not only a teacher, but a councilor, psychologist and arbitrator rolled into one. Most of all, Lopez is clearly loved by his students. They range from young JoJo, the class imp and 'star' of the show through the older boys whose schoolyard fight must be investigated. Philibert only shows the lessons of the younger children, who learn through repetition and example, while the older students are shown receiving help with homework assignments in their homes. The whole class comes together for a cooking lesson in crepe making (vive la France!) and field trips of sledding and picnicking.

Philibert bridges seasons and sequences with establishing exterior shots of landscape and the windows, doorways and gates of the buildings we're about to enter. The absence of narration works on the film's audience as Lopez's voice works on his students. Philibert enters the scene at about the hour mark (in voice only) for a quick interview with Lopez outside of his home where we learn that he came from a farming background and is soon to retire.

"To Be and To Have" is a remarkable document of a time that's almost past. Nicholas Philibert's exploration of a teacher's connection to a community is done with beauty, grace, humor and a gentle sense of melancholy.

The one-room schoolhouse may seem like a thing of the past, something Americana. But, in rural communities in modern day France there are still thousands of such little schools. Nicolas Philibert and his three-man documentary team visit one such a school and become a regular fixture for the academic year for the pre-school to 5th-grade crowd somewhere in the heart of the Auvergue in "To Be and to Have."

This is marvelous bit of documentary cinema verite that examines the still-existing one-room schoolhouse in rural France where local community kids are all taught together until they are ready to enter middle school. Philibert, after an extensive search - he visit over 100 such schools - selected the classroom of 55-year old Georges Lopez who has taught in the community for 20 years.

Rather than make a statement about the education system in France, filmmaker Nicholas Philibert chose to make him and his crew a part of the woodwork for a year in one such classroom in a tiny dairy producing community in rural France. The focus of the film is on Lopez, a teacher nearing retirement who has spent the last twenty years in the town educating generations of its youngsters.

The film begins in the throes of winter as the children are picked up in a van, moving from one farm to the next, and deposited at school. From here on in we are a fly on the wall watching the interaction between Lopez and his diminutive wards. What struck me most significantly is the utter calm and patience the 55-year old educator maintains while helping to raise and teach the community's kids during their most formative years. The film, whether intentional or not, gave me a renewed respect for the teacher and the importance of their role in this world.

With only one exception, when Lopez talks to the camera in a short interview, "To Be and to Have" is a true document of rural life. There is no embellishment as the camera observes day-to-day life with the teacher and kids. With about 7 months' time at their disposal, the four-man docu team quickly blend into the background and teacher and children become at ease with their presence early on. The film follows the education process as the younger kids are taught to read and write and the older kids get more rounded training and are prepared for their entry to middle school. The crew tags along on the occasional field trip, too.

The French title "Etre et Avoir" are the two prominent verbs that the kids (or any French student) must learn to conjugate. The title also has a deeper sense of being and possession for the teacher and his young students.

The fly-on-the-wall method used to document rural French school life is a refreshing departure from the now more prevalent technique of the docu-makers being a visible part of their work. Philibert and crew are out of the picture almost entirely and this allows the viewer to join them as observers of life