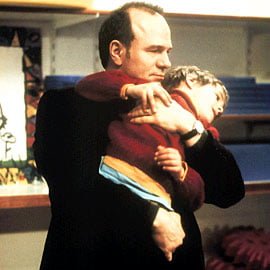 Vincent (Aurilien Recoing) spends his days driving around, listening to music and smoking. He occasionally check in with his wife Muriel (Karin Viard) and reports on fictitious business trips and client dinners. When his evasiveness becomes too much for Muriel and his parents (Jean-Pierre Mangeot, Monique Mangeot) to bear, he creates an fantasy career transition to a prestigious UN job in Switzerland. Soon Vincent finds himself choking in a web of lies and deceit when all he really needs is "Time Out.".

Director Laurent Cantent and cowriter Robin Campillo explored employment, the relationship between fathers and sons and how those two are connected in their first collaboration "Human Resources." While they continue exploring those themes in "Time Out," this is no rehash. Their sophomore film is a more confident, richly acted, emotionally devastating piece of work and 2002's first great film.

We only gradually discover that Vincent has been fired from a long-standing consulting job when concerned ex-colleague Jeffrey (Nigel Palmer), whose phone calls he's been avoiding, runs into Vincent and Muriel in a store. Previously Vincent has always been seen surrounded by children in the parking areas and roadside restaurants where he stops, symbolizing the carefree life of no responsibilities he clearly yearns for. Vincent even announces his new post at his children's school fair, perhaps in competition with or desiring attention from his eldest, son Julien (Nicolas Kalsch), who has just won a martial arts exhibition and resents his father's absences.

Vincent supplies details of his new job from literature he's taken from a Geneva investment firm's lobby. In need of cash, he looks up old acquaintance Fred (Christophe Charles), an unambitious man conveniently relocated in Switzerland, and proposes fake get-rich-quick investment schemes using his pilfered brochure info. Vincent's pitch is observed by a stranger (Jean-Michel, Serge Livrozet) whose motives are not entirely clear.

Vincent also gets a large loan from his well-off father for a nonexistent apartment in Geneva. Those two lies begin Vincent's downfall, as true friend Nono (Maxime Sassier), an expression of Vincent's ideal, presses his paltry life savings upon him, while his family begin clamoring to visit his Swiss abode. Jean-Michel, a man recognizing his own unsavory past, is able to get Vincent's real story back in that hotel lobby as investors begin demanding results. The stranger provides friendship and a safety net dealing in counterfeit goods (ironically, the very thing Vincent purports to investigate with the UN), but it's a temporary hold in Vincent's descent into mental breakdown.

This film should strike a note with anyone who's ever experienced on-the-job stress or anxiety. Vincent is a man who can't live up to the standards his father has laid down before him, yet tries to emulate him by the largesse he shows his own son. In "Time Out's" astonishing final scene, the elder generation's influence once again pigeonholes Vincent into the outwardly successful position he does not have the strength or drive to cope with. Recoing, who resembles James Gandolfini without that actor's physical menace, gives an amazing performance here, showing his soul being drained away within his eyes. The actor adroitly adjusts his personal barriers throughout the film, alternately revealing and hiding his true emotions.

Karen Viard is also strong as Muriel, letting annoyance over her husband's secretiveness turn into concern, first for him, then for her entire family. Livrozet, with his craggy, world-worn face, is a find as the unlikely friend and pragmatist.

Brilliantly written, directed and acted, "Time Out" is both a depressing and exhilarating piece of filmmaking.