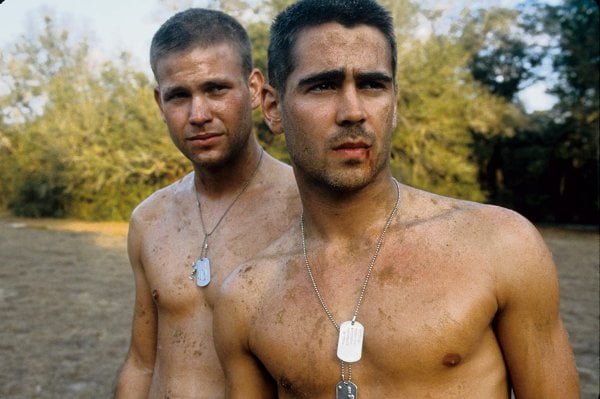 The Vietnam War is in its dying throes but that doesn't mean that fresh meat isn't needed to feed the grinder of war. Draftees make up the bulk of the Army whose job it is to push these boys-turned-men through basic and advanced infantry training into a place that is "as close to the war as we can make it" in "Tigerland."

Bozz (Colin Farrell, "The War Zone") is a humanitarian rebel in advanced infantry training at Fort Polk, Louisiana during the Vietnam War. His next stop is known throughout the Army as the second worst place on earth, "Tigerland."

Director Joel Schumacher is known for such Hollywood product as "Batman and Robin" and "8MM." He made his first foray into non mainstream filmmaking with last year's "Flawless," although that film had the star power of Robert DeNiro. With "Tigerland," Schumacher delves into gritty low budget land with a cast of unknown character actors and star-in-the-making Colin Farrell as his lead.

A fresh group of recruits is assembled at Fort Polk. Paxton (Matthew Davis II, "Urban Legends: the Final Cut") provides the audience point of view as the narrator of the story and the immediate buddy of Bozz, who will attain mythical status by film's end. Paxton's a decent guy, married with two kids. Cantwell (Tom Guiry, "U571") worries about his epileptic teenage wife and provides down home philosophy. Johnson (Russell Richardson) is a Black soldier who quietly identifies Bozz' strange agenda. (Black men are only portrayed sympathetically here, as Sergeant Eveland (Matt Gerald, "Magnolia," is the only officer who turns a blind eye to Bozz' actions.) Miter (Clifton Collins Jr., "Traffic") is the unlucky guy who's made platoon leader, responsible for his men's actions to Sergeant Thomas (James MacDonald, "Space Cowboys"), the worst type of brutal, taunting Army officer. More dangerous is Wilson (Shea Whigham), a Sadistic recruit who may be responsible for beating Cantwell in their barracks at night.

Bozz challenges the Army at every turn, questioning why he'd want to torture the enemy or play their game in general. One by one, he manages to secure the lives of his friends, first by going up against Captain Saunders (Nick Searcy, "Cast Away"), insisting that the Army's own laws allow for Cantwell to be granted hardship leave.

When the group is moved to Tigerland itself and into the professional hands of Sergeant Cota (Cole Hauser, "Pitch Black"), the men are split into play acting camps with Bozz and Paxton cast as Vietnamese and Wilson as a U.S. soldier. Bozz makes a run for the Mexican border under cover of night and Johnson's silence, but returns at dawn, protective until the end.

Written by Ross Klavan and Michael McGruther, "Tigerland" is a familiar tale. The casting and realistically chaotic direction have the negative effect of making the viewer strain to identify individual characters. Bozz stands out from the onset, however, and is reminiscent of Willem Dafoe's Sergeant Elias in "Platoon," and Jim Cavaziel's Private Witt in "The Thin Red Line." Farrell has garnered much critical acclaim for this role (he was awarded Best Actor by the Boston Society of Film Critics), yet his is a lead in an all around tight ensemble. Tom Guiry's Cantwell is the most moving, multi-layered character while Farrell's Bozz is more of an enigma.

The film was shot hand-held by Matthew Libatique ("Requiem for a Dream") in a black, white and green palette studded occasionally with some earth tones that gives the film a faded documentary look. The score by Nathan Larson ("Boys Don't Cry") is odd, yet fitting, sounding like bluegrass by way of Asia.

"Tigerland" is an interesting portrayal of myth-making that nonetheless requires somewhat more effort from its viewer than it merits.

Joel Schumacher's latest opus is an old-fashioned, coming of age film, set on a southern Army base as the war in Vietnam winds down. Even with the war drawing to a close, the military machine keeps cranking out soldiers from its camps and sending them off to battle. For the conscripts it is a frightening journey that they know will end half way around the world. Into this scary world of violence and, to some, near-torture comes another draftee, Roland Bozz (Colin Farrell).

There is one thing that differs Bozz from the rest of the inductees. He doesn't care and he doesn't mind letting his superiors know it. He is a rebel with a cause as he makes it known that having him court-martialed for his insubordination will give him what he wants - to be as far away from the war as possible. Since he has nothing to lose, his superiors leave him alone and Bozz attains an odd kind of freedom in the constricting confines of the Army. He befriends a hardship case, Cantwell (Thomas Guiry), whose child bride is very ill and needs his care. The unit captain (Nick Searcy) has refused to even consider Cantwell's pleas, until Bozz intercedes and tells his friend just what to do and say. When Cantwell confronts his captain again, he is armed with military chapter and verse. The kid gets out.

>From here, the story becomes a series of quests by Bozz to save his friends from the meat grinder of the war. He is a tragic figure from the start, destined to a fate that will bring him to the place he denied for so long - Vietnam. But this is all conjecture as the story really follows conventional lines as the soldiers are bullied and beaten by Sgt. Thomas (James McDonald) in preparation for their journey to Tigerland, the place that will make or break them. Not all the noncoms are bad guys, though, as the film shows how it takes all kinds to make an army, good and bad. Some of the men training the boys are compassionate and caring. One Tigerland NCO (Cole Hauser) admonishes his wards "to listen and to learn" because what he has to teach them may save their lives in combat.

The ensemble acting effort by those surrounding Bozz is well played. Thomas Guiry garners sympathy as the not-too-bright Cantwell. Clifton Collins, Jr., as the mentally ailing Miter, is another one of Bozz's missions. Bozz also saves his friend Paxton (Matthew Davis), the only enlistee in the outfit, from the war whether the volunteer wants his life saved or not. Shea Whigham, as Bozz's main adversary among the draftees, Wilson, is a two-dimensional bad guy whose comeuppance is assured. The rest of the cast is played as two-dimensional figures, simply filling in the background.

The production has the appropriate look and feel of a place where men prepare for war. When the troops finally ship out to Tigerland for their last week of on-the-job training, they make a journey that is a cross between "Apocalypse Now" and the entry into "Jurassic Park." At one point one of the soldiers even says, "It's a war theme park." I half expected to see T-Rex poke his head out of the jungle. But for all of the cliche, "Tigerland" is a well-crafted, though predictable, parable about a man so bent on saving others that he may not be able to save himself. The myths that spring up among the soldiers about our hero, Bozz, in the end are handled as a coda that ends the film with a positive note of hope.