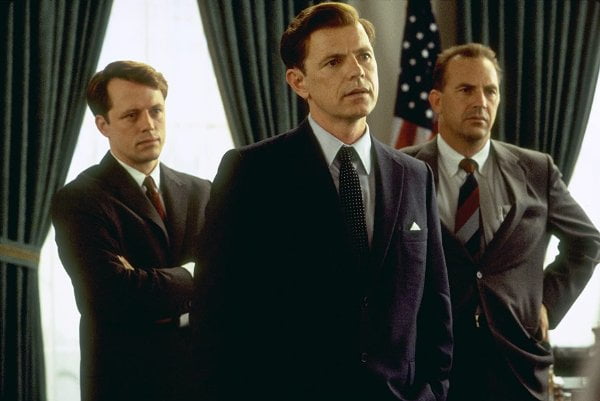 In October of 1962 the United States found itself on the brink of nuclear holocaust when U2 spy plane flyovers of Cuba revealed that the Soviet Union was actively deploying and installing medium range ballistic missiles 90 miles from the US. President John Kennedy (Bruce Greenwood) and his staff must face this major threat to world peace and stop Soviet expansionism in director Roger Donaldson's dramatic recreation of the most dangerous crisis in American history in "Thirteen Days."

I was four years old when the Cuban Missile Crisis was going down. After seeing director Roger Donaldson's "Thirteen Days," I'm glad I was oblivious to the saber rattling.

In a year when "The Contender" represents the current state of politics and the media's obsession with sexual shenanigans, "Thirteen Days" harkens back to the days of true world leaders. In October, 1962, President John F. Kennedy (Bruce Greenwood, "Double Jeopardy") is presented with photographs identifying Russian missile installations being built in Cuba. With his Chiefs of Staff, including extreme Hawk General Curtis LeMay (Kevin Conway, "Two Family House"), bristling for a fight, Kennedy and his brother Robert (Steven Culp, "Nurse Betty") are forced to play an intricate game with the highest of stakes.

David Self's script (1999's "The Haunting") uses Kennedy advisor Kenny O'Donnell (Kevin Costner) as the audience's eyes and ears into the escalating tension at the White House as well as a bridge to family life outside the political arena. As O'Donnell's name isn't widely recognized, we're able to observe the likes of the Kennedy brothers, Robert McNamara, Adlai Stevenson and other notable figures of the era from more common ground. With the exception of the overly broad Boston accent, Costner delivers fine, restrained work here. (Historians may quibble about the extent of O'Donnell's role, but it works for the film). While most may be familiar with the broadstrokes of this event, the script is still rivetting storytelling as the world's future all comes down to human intuition and second guessing.

O'Donnell's closeness to the Kennedy family is immediately established as he jokingly spars with Jackie (an unconvincing Stephanie Romanov) over a White House party guest list. Soon the major players - Robert McNamara (Dylan Baker, "Happiness"), General Maxwell Taylor (Bill Smitrovich), General Curtis LeMay, Dean Rusk (Henry Strozier), General Marshall Carter (Ed Lauter), Lyndon Johnson (Walter Adrian), Dean Acheson (Len Cariou) and Ted Sorensen (Tim Kelleher) are assembled in various configurations debating the course of action. Kennedy clearly doesn't trust his military advisors after the Bay of Pigs, so favors a blockade (to be called a quarantine as a blockade is an act of war). Many of his advisors find this weak. O'Donnell takes it upon himself to contact the men in the trenches flying spying missions over Cuba, to beg them 'not to be shot at' - in other words, not to provide any information about Russian aggression to their commanders. McNamara squares off against the Naval Chief of Staff in the war room, demanding that only the President give orders to fire upon Russian naval vessels.

The uneasiness is also represented for the Russian side, as Kruschev's handwriting is analyzed as 'being under great stress' and O'Donnell reassures a nervous secretary in the Russian Embassy that he's a friend. Pacifist Adlai Stevenson (a terrific turn by Michael Fairman) recreates the famous, televized UN hearing where he accuses the brash then flustered Soviet Ambassador Valerian Zorin of lying about their missile installations.

Meanwhile Helen O'Donnell (Lucinda Jenney, "Remember the Titans") copes with the large O'Donnel brood as her husband intermittently makes his way home for brief time periods at odd hours. The media is held at bay until JFK addresses the nation, then the American public empties stores of supplies and holds its collective breath.

Bruce Greenwood beautifully evokes JFK. Without really looking or sounding like him, Greenwood gets the body language, the mannerisms, the fiery intelligence and the uncertainty of the man. Steven Culp, looking and sounding quite a bit like RFK, absolutely works off of Greenwood to create a portrait of the two brothers.

The film ends on a grace note. As the Kennedys and O'Donnell walk outside the White House walls, we hear the real voice of JFK. The actors pass, each leaving a shadow, the last of which is our 35th President.

One of the highlights to come out of made-for-TV movies was a 1974 entry called "Missiles of October" that also recreated the historic event that almost embroiled the US, USSR and the world in an all out nuclear showdown. That teleplay, starring William Devane and Martin Sheen as John and Bobby, showed the political tensions of the period that brought to the fore the danger the world faced in those two weeks in 1962. Now, a quarter of a century after the landmark TV movie, director Roger Donaldson and producer Kevin Costner team together again (the last time was for the taught spy thriller "No Way Out") to re-enact the events of that most dangerous time in America's and the world's history.

Taken from the viewpoint of Special Assistant to the President Kenneth P. O'Donnell (Costner), Donaldson and crew recreate that volatile event, once again, as the country is plunged into what could have been total nuclear war. As O'Donnell gets ready to head to work one October morning, he deals with the usual family crises and problems. Meanwhile, a U2 spy plane photo mission over Cuba has produced some startling images - medium range nuclear missiles in the first stage of deployment. Suddenly, Ken's routine day switches into crisis mode as the President and his key advisor Bobby begin to muster the considerable forces of the US military to face the Soviet threat.

Where "Thirteen Days" differs most from "Missiles of October" is, as expected, in the scope of the project. There is a big difference, budget-wise, between making a television docudrama and one that goes to the big screen. It shows as the makers of "Thirteen Days" craft a recreation of the Cuban Missile Crisis that encompasses not only the political intrigue within the White House, it also depicts the events that took place as America girds itself for nuclear confrontation.

The cast, a true ensemble, is led, surprisingly, by Bruce Greenwood as JFK and not by Kevin Costner. Costner's O'Donnell represents the family guy thing as the drama of the crisis has its impact on him and his family. This puts a personal spin on the film as we see both the crisis and America's preparation for war and the pressure it brings to bear on those in the know. Kenny reassures his wife and kids that all will be okay and they will be safe, but he knows that, if the crisis comes to a head, his family will be no more. The meat of "Thirteen Days" is in the big picture, not the microcosm of family, though.

This is where the film stands out as we see the workings of our government on the highest levels. The story does not just cover the face-off between the world's two most powerful countries; it also depicts the animosity between the president and the military/CIA. The disaster of the Bay of Pigs invasion the year before left a distrustful taste in the mouths of the generals and admirals who blame the Kennedys for not backing the Cuban expatriates fighting Fidel Castro. The missile crisis becomes a struggle for power as the Army/Navy/Air Force want to flex their might and invade Cuba, while JFK wants to end the confrontation peaceably but with America's dignity and world leadership intact.

While the internal battle for power rages in the White House, with Air Force chief Curtis LeMay (Kevin Conway) advising the president to bomb Cuba into the stone age, our armed forces are set into motion to stop the Soviets with a blockade of offensive weapons to Cuba. This is where the political intrigues of high office are replaced by exciting action. When the first confrontation takes place between a US warship and a Soviet freighter, the tension is palpable. The most involving action sequence takes place late in the game as another U2 is sent up to shoot some snaps of the buildup and the fully prepared Soviet forces launch an anti-aircraft attack on the hapless pilot of the spy plane. This is a sweaty palm sequence to say the least, making you squirm in your seat as you try to help the pilot avoid those missiles.

The ensemble cast places Greenwood as the first among equals with like weight given to all the principle players. Greenwood does not play act at being a caricature of JFK, foregoing the typical Kennedy Boston accent. Instead, he plays the man as a powerful figure who has to maintain the dignity of the office, directing his subordinates but giving them the latitude to make clear all of his options. Kennedy used this decision by committee method to good effect as his senior staff uncovers all the options available to the president. Costner, as Ken O'Donnell, is really a supporting cast member as a Kennedy crony brought on board as a personal political favor. Costner plays O'Donnell as if he crammed on old JFK speeches with a forced Kennedyesque twang to his speech.

The rest of the players are first rate from start to finish with Steven Culp looking and sounding just like Robert Kennedy. The rest of the familiar players in this drama are uniformly well cast, too. Standing out are Michael Fairman as the beleaguered US Ambassador to the UN, Adlai Stevenson, who was forced to become the challenging voice of the United States in the United Nations and I remember the confrontation vividly. The filmmakers capture the accusations laid down by Stevenson with accuracy, using old style video footage to good effect. Dylan Baker has the look and feel of the intelligentsia as the brainy Secretary of Defense Robert McNamara. Kevin Conway gives his General LeMay the right "bomb them to hell" attitude. Also notable is Christopher Lawford as navy pilot William Ecker who, with his wingman, takes on the dangerous mission of a low-level photo recon into the heart of Cuba, bravely challenging Kenny O'Donnell's admonition, "Don' get shot."

Tech credits are superb across the board with an admirable depiction of the US armed forces being placed on a war footing. It's an impressive production with the careful use of period aircraft and ships that gives the film a veracity fitting the event. Solid costuming by Isis Mussenden is subtle but has the look of the Kennedys. There is the usual array of vintage cars from the period to make things look right. The special F/X of the U2 sequences are a nice crafting of computer imaging.

The Cuban Missile Crisis is probably the most intense two weeks that the United States has ever faced in its survival as a world leader. Helmer Donaldson and his fine crew and cast have given the depiction of this crucial event with the care and attention to details that make this one of the finest docudramas of the year.