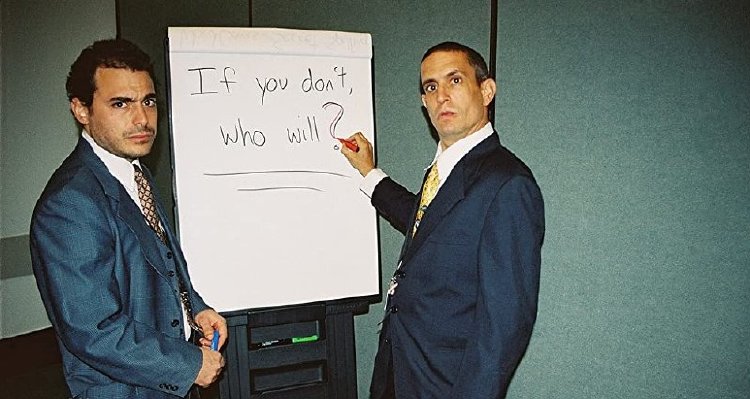 In 1999, two young men, Andy Bichlbaum and Mike Bonnano, started an anti-GWBush web site that closely mimicked the wannabe president’s own. The successful satire earned them the funding to create another site called www.gatt.org that almost mirrors – except for the facts given – the website for the World Trade Organization. The spoof site so closely resembles the WTO’s that the anarchistic activists get invited to high level conferences around the world as representatives of the organization they imitate and subvert in “The Yes Men.”

Documakers Dan Ollman, Sarah Price and Chris Smith, following the underground success of their previous film, “American Movie,” turn their sights to world-class issues as they team up with the Yes Men, Andy and Mike an company. The two young mavericks already entered the pantheon of good-natured anarchy with their site www.gwbush.com that looked and felt an awful lot like the now-president’s website www.georgewbush.com. Music icon Sergio Mendez (of Brazil 66” fame) funded the next Yes Men venture as they tackled the World Trade Organization.

The WTO used to operate under the moniker GATT (General Agreement on Tariffs and Trade) but changed its name a few years ago. The shift from their website www.gatt.org to www.wto.org left a vacuum (and site name) that fell into the hands of the Yes Men. Andy, Mike and their consultants constructed a new site under the GATT banner that looks awfully like that of the WTO and began putting forth faux policy statements as the World Trade Organization. Many visitors to their site believed it to be real and the Yes Men did their best to answer any questions – usually with their own twist.

The spoof gets taken up a notch when they are invited to a tariffs and trade conference in Salzburg, Austria as representatives of the WTO. Donning cheap suits and a laptop full of Yes Men propaganda, they enter the conference and begin to extol many outrageous policies – including the individual selling his vote to the highest bidder. None of the intelligentsia attending the meeting appeared to think that anything was amiss with the crazy policies put forth.

The Yes Men’s next big hurdle was a conference in Finland, but not before one of them, Andy, is invited to appear on CNBC Marketwatch Europe as a WTO representative. After the broadcast that was seen by thousands, maybe millions, they head to the far north of Europe to promote a first-world leisure suit that would allow corporate executives the ability to monitor their third-world workers via electronic implants in the laborer’s shoulder. The fact that the monitor attached to the golden suit is a three-foot long phallus and establishes a Big Brother kind of control on the workers did not faze the attentive audience.

Encouraged by their success, the Yes Men accept the invitation to come to Australia for a big accountant’s conference. They want to do a good job down under so they prepare their speech – which condones recycling first world human waste to be used as food for the people of the third world – and give it to a group of college students in Plattsburg , NY. The students are the only group to react negatively to the outrageous policies the Yes Men put forth.

The final act of the Yes Men takes them to Australia and, in a change of plans, they announce that the World Trade Organization is being disbanded because of its unfriendly policies. The news release goes to over 25,000 journalists world wide and the statement is even debated in Canada’s Parliament! On the heels of their success, the Yes Men search for other wrongs to right and new anarchistic challenges.

The Yes Men” starts off as a bit of a goof as we are given their history and the beginnings of their plan to mimic and subvert the WTO. They are pleased with the results of their false web site and numbers of hits it gets but the meat of the movie lay in the legitimate invites to conferences, lectures and TV news programs in France, Austria, Finland, Australia and the United States. The humor, and jaw-dropping policy statements the Yes Men make as representatives” of the WTO, is the draw to the film.

The sheer chutzpah that Andy and Mike, with their supportive cronies, exhibit as they make their outrageous statements is a pleasure for the anarchist inside me. That their faux lectures are taken seriously, even applauded, speaks for their audacity. Tell a big lie often enough and people will believe it as truth” is the premise they follow and the team of subversives stick to it. In the end, you laugh with them and laud their efforts on changing the world, even just a little, for the better