The Wind Will Carry Us 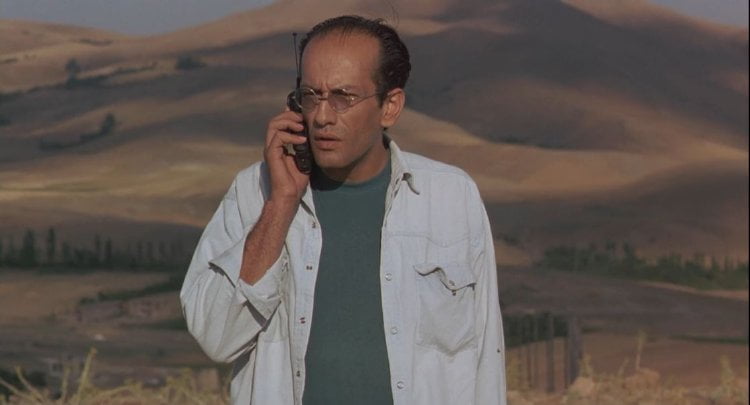 An engineer (Behzad Dourani) and his two unseen colleagues make their way to a small village with a secret mission (they discuss a cover story about looking for treasure). They're met by a young boy who shows the engineer into the village. The engineer asks about the house of an old woman, who is ill. Eventually we learn that it is her death that the engineer awaits, but he learns a lot about life during that time in Writer/director Abbas Kiarostami's ("The Taste of Cherry") "The Wind Will Carry Us."

At the start of "The Wind Will Carry Us," we watch a utility vehicle wend its way through winding roads shimmering in a landscape of red earth and golden fields dotted with bright green trees. We hear the travellers discuss the ambiguity of their directions which indicate looking for a single tree. When they finally stop and ask a field worker, they're succinctly told to go 200 yards past the next junction. This woman in the field is the first face we see and she's already delivering one of Kiarostami's subtle jokes.

The engineer (his colleagues are never seen, only heard) becomes fast friends with young Fahzad, who supplies the men with their morning bread and supplies the engineer with updates on the old woman's health (she didn't eat her soup today). Otherwise he's always running off to school where it seems he has a daily exam. The engineer takes his tea at a local spot where the old woman who serves argues with her husband about her work versus his ('every woman serves except your mother'). Across from the engineer's room, a young, very pregnant woman hangs the laundry of her nine children and tells him where to procure milk. When a nonpregnant woman returns the next, he believes it's her sister, but no, the newborn is simply swaddled across her back.

So the engineer essentially does nothing but wait, while everyone around him labors. His days are filled by the call of his cell phone, but he can't get reception unless he drives up a hill to the cemetary. There he meets a man digging a ditch (unseen again) for 'telecommunications.'

He has other encounters as well. He picks up the local teacher along the road who uncovers his true mission (apparently the young boy's spilled the beans). Here's someone we do see, but learn we haven't seen at all - when the teacher leaves the engineer's vehicle, we discover he's crippled. The engineer's sent into a dark earth cellar where a young girl milks a cow for him while he recites poetry for her (and the film gets its title), yet she refuses to shine her lamp on her face. A doctor tells him that he's called infrequently, giving him time to observe nature (to see). The doctor prefers the present because 'even a drum sounds melodious from afar.'

Kiarostami lets his tale unfold slowly (and somewhat repetitiously) and leaves many blanks for the viewer to fill in (just why is the engineer trying to document a mourning ceremony?). His contemplations on life and death (perhaps most strongly contrasted by the engineer's mission versus the doctor's philosophy) are presented with a low key use of humor. (The engineers unseen colleagues fill their days with pursuit of strawberries and eventually appear to desert him.)

Kiarostami's location is stunningly well chosen, a white village (called the Black Valley, another enigma) built into the landscape so that it almost disappears. Nature is a strong motif, especially when the engineer's capacity for cruelty is portrayed by his overturning of a turtle. Later, in the same spot, he watches a dung beetle working and smiles.

Cinematography by Mahmoud Kalari makes exceptional use of a bright and simple color palette. Long shots establish the surrounding areas of the village and the intricacy of the village itself.

"The Wind Will Carry Us" is a thought provoking, beautiful film, but may antagonize viewers who prefer a linear, mainstream story treatment.