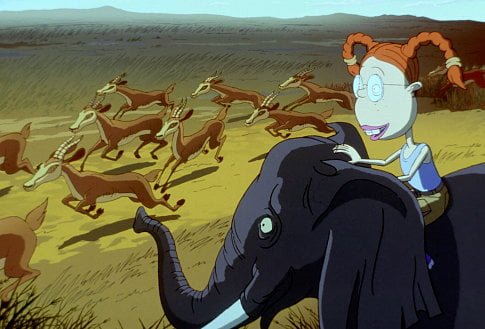 The Thornberry family travels the world with dad (Tim Curry) hosting a wildlife/explorer TV show and mom (Jody Carlisle) handling behind-the-camera technical chores. Helping out with her special secret gift is young Eliza (Lacey Chabert), her not so helpful, older teenage sister Debbie (Danielle Harris), and Eliza's best friend, a chimpanzee named Darwin (Tom Kane). Their latest journey takes them to the Great Serengeti Plains of Africa where evil poachers rear their ugly heads in the first feature film based on the Emmy-nominated Nickelodeon TV show, "The Wild Thornberrys Movie."

When 12 year-old Eliza Thornberry (Lacey Chabert, "Lost In Space") takes three African cheetah cubs outside the boundary set by their mother Akela (Alfre Woodard, "K-PAX"), poachers descend with a helicopter and capture one. Distraught by what her irresponsibility has wrought, Eliza becomes determined to get the baby back to its mother, but she'll need to circumvent her wildlife documentarian parents, the British boarding school her well-meaning grandparents send her to, and the loss of her special, secret ability to talk to animals in "The Wild Thornberrys."

Eliza, who was gifted with the power to speak to animals when she freed a warthog who was really an enchanted shaman, is the middle child of American camerawoman Marianne (Jodi Carlisle) and British wildlife explorer Nigel (Tim Curry, "The Rocky Horror Picture Show") Thornberry. Her older sister Debbie (Danielle Harris, "Urban Legend") is a valley girl teenager craving malls and boys, her younger brother Donnie (Flea of the Red Hot Chili Peppers) is an adopted wild child and her best friend is Darwin (Tom Kane, "The Powerpuff Girls"), a chimp. Horrified by the dangerous paths Eliza crosses, veddy British grandmother Thornberry (Lynn Redgrave, "Gods and Monsters") insists on packing her away to Haversham Hall, a traditional English girls' boarding school.

Eliza is thrilled to find that Darwin has stowed away with her, but her snooty roommate is appalled when the chimp borrows her school uniform to dine with Eliza and her classmates. Soon Eliza has managed to make her way back to Africa, where she unsuspectingly crosses paths with the same poachers, Sloan (Rupert Everett, "My Best Friend's Wedding") and Bree (Marisa Tomei, "In the Bedroom") Blackburn, who stole her cub buddy. As Eliza realizes the Blackburns have a nefarious plot to kill one thousand elephants, her family, split into three different groups, converge to rescue her.

Writer Kate Boutilier (story editor and producer of "The Wild Thornberrys" television show) packs multiple story lines into an eighty minute running time, keeping all strands moving entertainingly along until they all tie neatly together. She leaves Africa for a British boarding school sequence that's an entity unto itself without sidelining the main story. As Eliza's adventure progresses, Boutilier maintains equal interest with mom and dad's anxious communiques at the site of the elephant gathering, the grandparents' journey with Donnie in the family's RV home base and Debbie's dirt bike rescue mission. Debbie, who is certainly not a natural in the bush, meets Boko (Obba Babatunde, "John Q"), an African tribesman who joins the fray as her protector (and potential prom date?).

Boutilier also gets all those little character details right. Grandmother Cordelia parachutes into the bush with her bone china teacups. Darwin is only heard talking when the scene is from Eliza's point of view, otherwise he sounds like an ape, as does Eliza.

Made by the successful Klasky Csupo animation company, "The Wild Thornberrys" has the same distinctive look as their "Rugrats" series with meticulously researched exotic locales providing vivid color and natural beauty. Voice casting is outstanding, with Tim Curry's parody of an uppercrust English clip as Nigel the most inspired among a talented cast. The film's soundtrack features contributions from such luminaries as Peter Gabriel, Paul Simon and West African world music artist Angelique Kidjo. Tom Jones's classic, "She's a Lady," is a comic highlight.

"The Wild Thornberrys" will keep you on the edge of your seat from the moment that little cheetah cub is heartbreakingly airlifted away from its loved ones, but rest assured Eliza is one determined young lady. This is a solid family entertainment and a potential boon to wildlife causes, a good thing indeed.

The press blurb for "The Wild Thornberrys Movie" says that it focused on three things - Authenticity, Accuracy and Adventure. I have read countless press kits for, geez, a couple of thousand movies and this is, quite likely, the first time that I wholeheartedly agree with what the publicity hacks have to say. This is an environmentally friendly, smart, compassionate, kids-of-all-ages movie that combines wildlife adventure, socially conscious intrigue and environmentally sound thinking that is more significant and thought provoking than much of what I see at the movies.

The Thornberrys are an adventurous lot that consider the natural world a wonderful oyster that needs to be examined, but without harm or intrusion on the spirit and essence of its wildlife. This may be high praise for a kids animation but you have to give credit to a movie that receives the seal of approval from the WWF (that's World Wildlife Fund, not he former World Wrestling Federation, although they would probably like "Thornberrys" too).

While on safari, we learn that the Thornberry parents are in the wilds of Africa to capture on video a truly unusual and wonderful event - the migration of thousands of jungle elephants that takes place only on the event of a total solar eclipse. While on their way to the locus of this miraculous happening, Eliza, we learn, had an adventure of her own where she saved the life of a warthog in deadly peril. This particular warthog, though, is really a magical, shape-shifting shaman who grants the girl the astonishing ability to talk to any and all animals.

One day, when Eliza takes the cheetah cubs of her friend Akela (Alfre Woodard) out to play on the veldt, she goes beyond the boundaries of the safety of the landmark giant tree. Suddenly a huge, swift helicopter descends upon the gamboling cubs and one is snatched up by a shadowed figure, distinguished only by an eagle-headed knife strapped to his leg, on a rope ladder as the chopper hovers over the veldt. In a desperate attempt to rescue the kidnapped cub Eliza leaps onto the rope as they poachers speed off. The bad guy cuts the ladder but Eliza's fast-thinking parents save the brave girl in their specially built RV.

The incident has an extremely negative effect on Cordelia Thornberry (Lynn Redgrave), Eliza's upper crust British grandmummsy, who insists that it is time that her granddaughter stops being a tomboy and convinces mom and dad to send the girl to her boarding school in England. Eliza arrives at the Lady Beatrice School lonely and full of guilt for not saving the cub. Fortunately, Darwin stowed away and diverts her attention until she can figure out a way to get back to Africa. She succeeds and the story takes off in a fast-paced whirl of danger, intrigue, bravery and teamwork as Eliza and the rest have the adventure of their lives.

"The Wild Thornberrys Movie" is a case where the whole is greater than the sum of its parts. Piece by piece it is solid and well made, with good voice characterization, imaginative animation and a smart, exciting story gearing this to be good family entertainment at the theater and beyond. But, here, the combination of the pieces makes this an exceptionally intelligent kids movie that will tickle its audience's mind, both young and old, to learn more about the natural world.

Vocal assignments are fulfilled by the veteran voices from the show. Tim Curry does a terrific job in bringing dad Nigel Thornberry to life and injects goofy humor, capability and compassion into his likable character. Jodi Carlisle, voicing mom Marianne, provides the stolid sensibility and reason for the plucky little family. Lacey Chabert, as Eliza, is the kind of kid parents would want their children to emulate - intelligent, capable and aware of the world around her. Danielle Harris, as teen sister Debbie, is the self-centered valley girl who disdains everyone but comes through when the chips are down. Darwin (Tom Kane) provides the simian comedy relief to the proceedings. Michael Balzary (A.K.A. Flea) voices (actually, grunts) the Thornberry's adopted feral boy, Donnie, to amusing ends. Lynn Redgrave leads the newcomers to the franchise as the very proper grandma Cordelia. Rupert Everett and Marisa Tomei voice bad guys Sloan and Bree Blackburn. Alfre Woodard has a small role as the cheetah momma Akela.

The animation used for "The Wild Thornberrys Movie" is not groundbreaking but the action sequences, such as cheetah mom Akela speeding after escaping antelope, are done with energy and eye-grabbing movement. The musical score by Drew Neuman, with its distinctly African sound and feel, is complemented by songs by such musical luminaries as Paul Simon and Peter Gabriel. A plethora of original African song abounds, including a tune by veteran trumpeter Hugh Masekela. Tom Jones's "She's a Lady" is used to amusing effect.

Talk about a fun, intelligent kids' flick with both ecological and political awareness, humor and heart. "The Wild Thornberrys Movie" makes me a fan of the show - and I've never seen a single episode (yet).