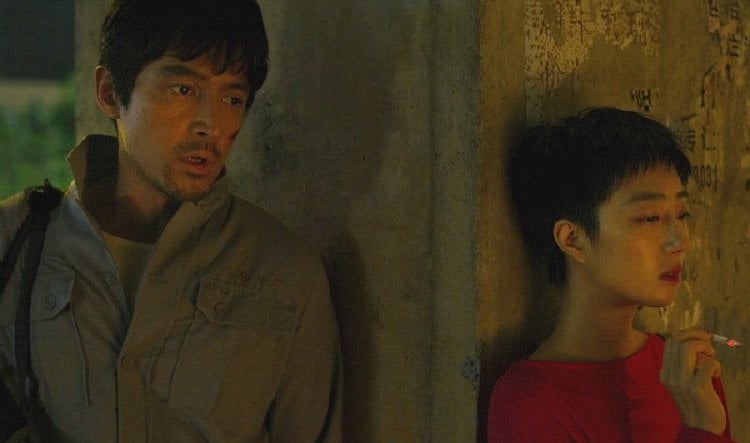 A battered man lurks, hiding, in the dark. A woman walks up to the man, pulls out a cigarette and says, “Got a light?” then offers to replace his wife. This leads to the memory of how the man got into his beaten and bruised state at a place called “The Wild Goose Lake.”

A local Chinese train station glows green and golden in the pouring rain. The handsome Zhou Zenong (Hu Ge) leans against a post, smoking. A woman in a bright red sweater with a see-thru umbrella sidles up, telling him that Hua Hua (Qi Dao) sent her. Liu Aiai (Kwei Lun-Mei) is a ‘bathing beauty,’ a prostitute who works mainly within the waters of “The Wild Goose Lake.”

Writer/director Diao Yinan’s ("Black Coal, Thin Ice") Wuhan-set neo-noir tells the tale of warring criminal gangs, the cops who chase them down and the women caught in between, the meal spiced with sudden violence and flashes of humor. It is also a thing of great beauty, a hotel room conflict cast in fuchsia, cinematographer Dong Jingsong (“Black Coal, Thin Ice”) flipping noir’s canted window blind lighting on its head and punching up nighttime exteriors with modern neon practicals, playing with his frame like a Lite Brite.

Flashing back two days, we witness too-cool-for-school Zhou, fresh out of prison, hanging back chewing gum as an underground roomful of gang members are instructed on how best to steal or break down motorcycles. When territory is assigned and Zhou is given the desirable Xingye Ave., a shot rings out and all hell breaks loose. Once things settle down, it is agreed that six members of two families will compete that very night – whoever brings in the most bikes will win the street.

This leads to a beauty of a shot, ‘Redhead’ (who is actually the bleached blond guy who fired that shot) riding a bike with a sexy light treatment towards an overhead highway with running lights of its own, all beneath street lamps glowing sickly yellow, Zhou riding more or less in parallel. As bikes are brought back into a field, one driver managing two at a time, Redhead suffers a sudden, shocking fate. Zhou turns around and shoots at a car by the side of the road. Unfortunately for him, it wasn’t Redhead’s gang as he suspected, but cops, one of whom he’s accidentally killed.

Yinan switches perspective to that of Captain Liu (Liao Fan), who presides over an almost identical meeting to the criminals’ earlier one as he instructs a roomful of plains clothes cops what to look for around Wild Goose Lake, where Zhou has been tracked. A 300K Yuan reward is placed on his head, a surefire formula for betrayal which Zhou hopes to beat to the punch by having Liu find his wife, Shujun (Qian Wan), then turn him in, getting the cash to Shujun and his young son.

There are so many breathtaking moments as criminals and cops fan out. Liu slips into a public dance full of lighted sneakers. Zhou slowly spins himself around an anchored gauze bandage.
The eyes of zoo animals glow in the dark as a man escapes in their midst. A tracking shot follows Zhou following Liu against a development advert, a fantasy journey through anxious reality.

In his world full of violent men, it is the woman, Liu, who grabs our attention. Lun-Mei crafts the film’s most intriguing character, employing Paul Heinreid’s “Now, Voyager” double cigarette technique while wearing a boyish orange and white striped bathing suit. Don’t come a tappin’ if the waves are a slappin’ out on “The Wild Goose Lake.”

I have been familiar with and a fan of Hong Kong gangster films for decades with early John Woo flicks jumping quickly into my mind. Mainland China, though, does not readily come to mind when thinking about gangster movies. Writer-director Yi’nan Diao takes the genre to heart and does a first rate job, especially visually, in telling an atmospheric tale of a man on the lam.

The man, Zhou Zenong (Ge Hu), we learn in flashback, heads a crime gang specializing in stealing motorcycles. He is at a meeting where theft techniques are taught and the city is divided into assigned thievery t zones. Zhou, senior in the gangs, is given the plum district where there are lots of bikes for the picking. But, the heads of a rival gang have other ideas and a faction war begins.

The lady, from the beginning, is Aiai Liu (Kwei Lun-Mei), one of the local “Bathing Beauties” (prostitutes plying their trade along the coast). She is tasked to bring the on-the-run Zhou to a meeting with his wife, Shujun (Regina Wan). But, this is just a side story as both the crime gangs and the police – Zhou accidentally killed a cop thinking him a rival gangster – hunt the man down with deadly intent.

So, we have an action-packed crime thriller and a strange love story, too. Add to this equation the incredibly capable eye of cinematographer Jingsong Dong that artistically captures the action visuals as well as providing the film its dark moodiness and we have a real deal here.