The Widow of Saint Pierre 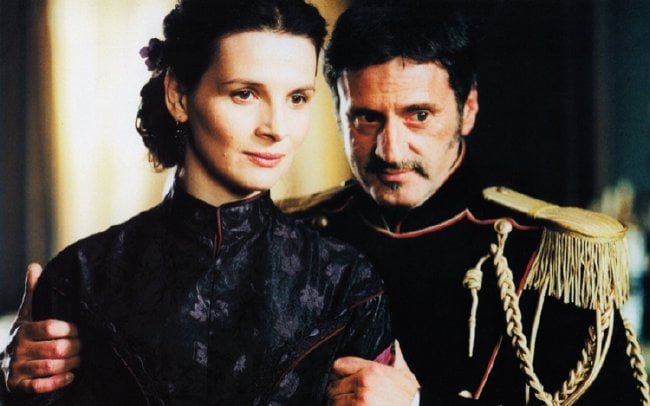 In 1850, a ship captain is brutally murdered by Neel Auguste (director Emir Kusturica) and Louis Ollivier (Reynald Bouchard) in the remote outpost of Saint-Pierre, a French owned island off the coast of Newfoundland. Neel is sentenced to death while Louis gets a life term, yet ironically Louis is killed in an accident on the way to the prison. Taking pity on Auguste is Madame La (Juliette Binoche, "Chocolat"), the unconventional wife of the captain (Daniel Auteuil, "Girl on the Bridge") responsible for carrying out the execution. As Saint-Pierre awaits the arrival of a guillotine, August becomes popular with the townspeople in "The Widow of Saint-Pierre."

Written by Claude Faraldo from the original court records, "The Widow of Saint-Pierre" is a tragic period piece. While the outcome of the story may be telegraphed, director Patrice Leconte ("Girl on the Bridge") shrouds his film in many layers of mystery.

The Captain is a good and moral soldier, elegant horseman and husband madly in love with his wife. While respected by the island's governors, he's seen as odd. We're told that Madame La has given up a prestigious name to marry the Captain, yet do not know why they've been banished to such a barren and remote post. Was their passion a scandal back home? In turn, Madame La's request to have Neel assist her with a garden is equally odd. While her instincts about the man prove to be right, her extreme nervousness upon meeting him make us question her motives, even more so when it's clear that Neel comes to adore her and gossip develops as the twosome traipse about the island performing good deeds. (Neel also impregnates a widow on one of these jaunts, whom he is later allowed to marry.)

As Neel's popularity grows (he's made an honorary member of the Cafe du Nord for 'the rest of your long life' by it's owner after saving the building) and the guillotine makes its way from the island of Martinique, tension mounts between the Captain and his wife and the island's governors, who insist upon carrying out the execution in order to save face with France. Their lack of an executioner, or anyone willing to become one, remains the Captain's trump card - for a time. As the Captain supports his wife's statements and actions almost to the point of insubordination, he gains the admiration of the wives of his superiors, further infuriating them.

Auteuil, so marvelous in Leconte's last film, is a completely different character here. While still a romantic, he's believable as a military man, cutting a dashing figure on his black stallion Salt Cod. Auteuil creates a totally sympathetic man whose honor is unquestioned even though all we really know about him is that he truly loves his wife (and his horse). Binoche as the absurdly pretty gentlewoman projects kindness, but her mysteries are a bit more frustrating as we're never really clear on her feelings for Auguste. The odd casting of director Emir Kusturica ("When Father Was Away on Business") as Auguste works - he's a burly bear of a man of few words, a St. Bernard trotting at Madame La's heels.

Leconte's cinematographer Eduardo Serra captures beautiful images, such as Auguste pulling Madame La along in a sled upon an endless expanse of snow. The movie was filmed on locations in Nova Scotia and Quebec with careful attention to period details.

One night, on the remote French-owned island of St. Pierre, a senseless murder takes place during a drunken quarrel. The repentant killer, Neel Auguste (Emir Kusturica), is sentenced to death - but there is no guillotine on the island needed to carry out the execution. During the months that follow, the island's intelligent military commandant (Daniel Auteuil) treats his prisoner with dignity. The captain's wife, Madame Lo (Juliette Binoche), questions the justice of the death penalty and is convinced that Neel will be redeemed by his good deeds in "The Widow of St. Pierre."

Master French filmmaker Patrice Leconte tackles the based-on-a-true-story period tale about a murderer who, through the kind attentions of the beautiful wife of the island's commandant, is not only fully rehabilitated, he becomes a local hero. There is mystery, though, in this tale of redemption as Madame Lo takes on an obsessive zeal as she first convinces her husband, the Captain, to allow Neel to build her a greenhouse in cold, windswept St. Pierre. As the prisoner gets over the drinking that was at the bottom of his crime, he becomes a stolid member of the community. But, the threat from Madame Guillotine never leaves as the island's administrators plead with the French government to provide the deadly machine.

"The Widow of St. Pierre" is a narrative story, taking a definite anti-death penalty stance, with complex character studies provided by the principals. The lead subjects are symbolic, but, with a great cast giving solid performances, these symbols are three-dimensional and complete, if almost unbelievably noble, people.

The story, by Claude Faraldo, begins in a brutal fashion with the drunken murder of a local man by Neel and a crony. The friend gets life in prison and Auguste gets an appointment with death. But, there is no requisite guillotine on the island and long distance negotiations begin with the leaders of the strife torn French Republic. Since the process will likely take months, the island military commander allows his ward the freedom of St. Pierre at Madame Lo's behest. The Captain's wife shows an inordinate, though chaste, concern for the health and well being of Neel and curiosity is piqued by the mystery.

As the months drag on without word from the home government, life grows complacent on the island and Neel becomes part of the fabric of life on St. Pierre, even marrying a local widow. He also becomes invaluable to the community at large and, at one point, saves a young woman from certain death during a house moving. The man's obvious rehabilitation should save him, but time is his enemy and even the fouled up French government eventually sends a guillotine. The problem then becomes finding an executioner, a job that no islander will take. But, the elders resolve the final stumbling block when a hapless immigrant is coerced into taking the deadly job.

Patrice Lucent has been making films in France for decades. Unfortunately for us in the US, only a few of this master's work has shown on these shores. Most exemplary (and my favorite Leconte film to date) is his black-and-white masterpiece, "Girl on the Bridge." That work was an extraordinary, stylish work that showcased its stars, Daniel Auteuil and Vanessa Paradis. The film was an intense character study that had a love story beneath the surface. With "The Widow of St. Pierre," Leconte moves into a period piece depicting the harsh life on the remote French colony while making a strong statement against the death penalty. With the likes of Auteuil and Binoche in the leads, he also can't help having rich characterizations, too. Then, too, there's the striking looks and strong, quiet character provided by director Emir Kusturica as Neel Auguste.

Leconte uses his tried and trusted behind-the-camera crew to put, once again, a striking image on the screen. His long-time cinematographer Eduardo Serra captures the cold desolation of St. Pierre while giving it a stark, photo-quality beauty. This complements both set design, by Ivan Maussion, and the fine costumes, by Christian Gasc, that firmly place the viewer right on that cold, cruel island in the mid 1800's.

"The Widow of St. Pierre" is another example of quality filmmaking by a master. Leconte is an expert at his craft and, with his fine cast and crew, continues to please.