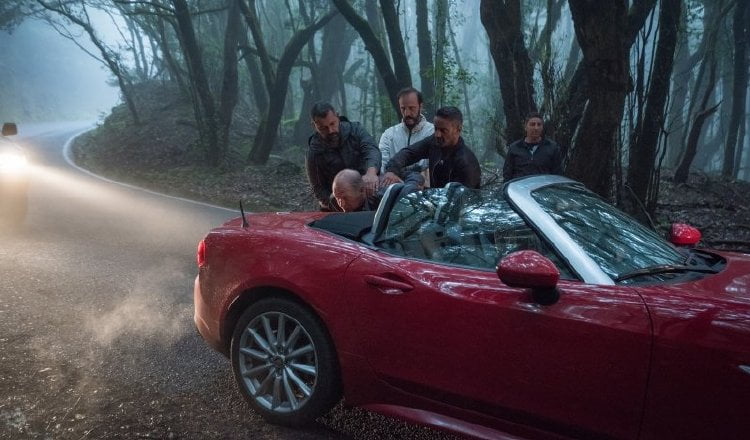 Cristi (Vlad Ivanov, "4 Months, 3 Weeks and 2 Days"), a Bucharest police detective we first met in “Police, Adjective,” is playing at capturing Zsolt (Sabin Tambrea, ePIX's 'Berlin Station'), a mattress manufacturer who has laundered 30 million Euros, to his boss Magda (Rodica Lazar). But in actuality, he has been lured into a scheme to abscond with part of the loot by femme fatale Gilda (Catrinel Marlon), who directs him to the Canary Islands’ La Gomera where he will learn to avoid surveillance by learning the whistled language El Silbo and become one of “The Whistlers.”

Corneliu Porumboiu explored the use language in "Police, Adjective" as an idealistic policeman reasoned against injustice with his superior (Ivanov).  Ten years later, Porumboiu’s subverting language with music, both with a cheeky soundtrack featuring Iggy Pop and opera and the whistling that allows our protagonist to communicate while escaping detection.

The film is a time tripping noir broken into character chapters.  Gilda (!) informs Cristi ‘Forget what happened in Bucharest – I did it for the security cameras,’ and the detective is thrown off a balance he will find increasingly difficult to regain.  A flashback informs us of their passionate sex in Romania, Gilda masquerading as a high priced call girl to throw off authorities.  We soon learn she’s not trusted by mafia head Paco (Agustí Villaronga)    either, Cristi’s whistling teacher Kiko (Antonio Buíl) having informed of her attempted double cross with Zsolt.

Magda, too, will throw a wrench into Cristi’s plans as she confers with him in the hallway outside of her own bugged office.  And Cristi’s disappointed Mama (Julieta Szönyi) will complicate matters further when she donates the bag stuffed with cash she’s found in their basement to the Church.  No one’s motivations are clear, at least until Cristi makes an unusual deal in the film’s third act, one which proves to have been worth the risk during a final musical scene set in Singapore’s Garden by the Bay.

Porumboiu’s puzzle of a narrative is dotted with amusing clues throughout.  The clerk at the Hotel Opera plays Bellini’s ‘Casta Diva’ and the Barcarolle from ‘Les Contes d’Hoffmann,’ which will need to be researched by non-opera buffs to find connections to the plot.  If a filmmaker searching for locations stumbles into a criminal gathering at a coastal warehouse, a shootout wipes out many later at a Romanian movie set.  Magda meets Cristi at a local movie theater, staying behind to finish watching John Wayne in ‘The Searchers,’ the scene we see featuring whistling.

If Ivanov’s stone faced portrayal    initially keeps us at arm’s length, his character’s complete loss of control against outside forces battering him from every direction eventually garners sympathy.  His chaotic journey ends perfectly, with a lighted music show and an enigmatic smile.

Cristi (Vlad Ivanov) is a corrupt Bucharest cop on a mission. He journeys to the remote Canary Island of Gomera to learn an ancient language not made up with words and he must become one of “The Whistlers.”

I was not sure of what I was getting into when I sat down to watch Corneliu Porumboiu’s latest cop drama set, in part, on a rugged volcanic island off the west coast of Africa. After sitting through “The Whistlers,” to be honest, I am still not sure what I watched. The writer-director builds a stylish caper flick that incorporates El Silbo, the whistling language, into its unique story.

Here is what I get out of it: Cristi is sent to Gomera to learn the secret language. It is made up of two vowels and four consonants and is indecipherable to the uninitiated. He must learn it as part of a plot to free Zsolt, a money launderer who is hiding 30 million Euros in a couple of mattresses. Taking part in the plot is the beautiful Gilda (Catrinel Marlon) who seems to know Cristi but pretends, for those watching them, to be a call girl.

There is also an undercover sting operation, led by Cristi’s boss, Magda (Rodica Lazar), which is supposed to bring the Mafia to its knees. But, the boss may be as corrupt as the bad guys and Cristi plays both ends against the middle. What I wanted, though, is for Cristi and Gilda to walk of into the sunset together.

Filmmaker Porumboiu, though, tells the story his way and the result is intriguingly unique caper film, a love story and homage to classic film. I mean, one of the main characters is named Gilda.