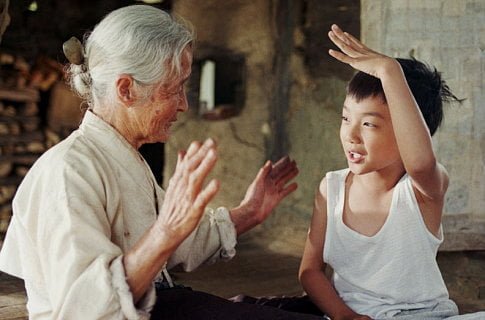 When a single, Seoul mother (Hyo-hee Dong) needs extended child care for 7-year old Sang-Woo (Seung-ho Yu), she takes him to the country grandmother (Eul-boon Kim) he's never met. Sang-Woo cannot comprehend a world without fast food and batteries for video games and erupts in childish tantrums at his patient grandmother. Her silent, unconditional love and caring eventually make an impression on the youngster as he finds "The Way Home."

'Foreign' and 'art house' are film phrases that are usually used interchangeably, but not all foreign films aspire to art. Korean writer/director Jeong-hyang Lee delivers a sentimental film seemingly designed to appeal to Western audiences with its pop culture references and cloying, Hollywoodized score. "The Way Home" is a commercial film that offers no cultural exchange, yet the silent performance of Eul-boon Kim enforces a visual storytelling style and both of these elements are strong even though "The Way Home" ultimately disappoints.

It doesn't help that Sang-Woo is essentially a spoiled brat. Children are inherently selfish creatures but Sang-Woo exhibits few if any redeeming qualities and realizes his grandmother's worth so late in the film that it is almost just another excuse to bawl. Grandmother, on the other hand, is a wonderful, bent spirit of nurturing as embodied by Eul-boon Kim. Her slow, steady movements are at one with the natural landscape. The film's central conflict is wrapped up in its center when Sang-Woo demands food that he is used to, showing grandmother a glossy menu card and screaming for KFC. She makes an arduous trek to obtain a live chicken, obviously a luxury, and sits back in confusion, eyebrows knotted together, when her boiled offering is rejected.

Jeong-hyang Lee choreographs his two protagonists so that they seem to circle one another in the anti-magnetic throes of technology vs. nature. In one sequence, Sang-Woo roller blades around his grandmother as she slowly cleans the floor, then he's seen jumping to reach a pot that she magically straightens to retrieve for him. Editors Jae-beom Kim and Sang-Beom Kim achieve a rhythmic montage with cinematographer Hong-shik Yoon's beautifully framed images. Grandmother watches a sunset. Sang-Woo ambles by in the background, turns to see what she's looking at, shrugs and moves out of frame.

Jeong-hyang Lee's simple tale never delves into the relationship between mother and daughter, with Sang-Woo's parent represented almost like the disembodied, high-heeled legs that represent adults in Peanuts animations. "The Way Home" is dedicated to grandmothers everywhere, but while it does well by them, the children they care for give weight to the old W.C. Fields' quote "I like children - fried."