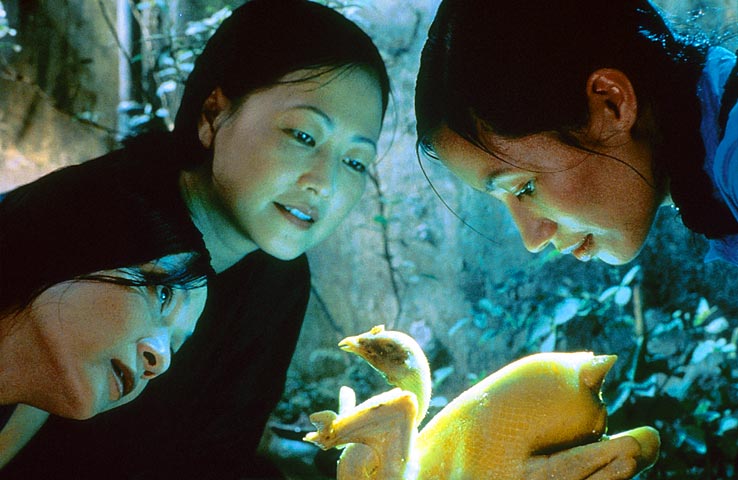 In present day Hanoi, three sisters reflect on their parents' relationship while trying to define their own in writer/director Tran Anh Hung's ("The Scent of Green Papaya") "The Vertical Ray of the Sun."

Youngest sister Lien (Tran Nu Yen-Khe) greets the day with Hai (Ngo Quanq Hai), the only brother whom she rooms and relentlessly flirts with. Their morning ritual of Tai Chi and Lou Reed precedes crossing the street to eldest sister Suong's (Nguyen Nhu Quynh) cafe, where Lien works, for breakfast. The three sisters lovingly prepare their mother's memorial banquet of traditional delicacies, prepared as much for look as taste, while giggling over the differences between the sexes.

After the family breaks from the banquet, we learn that Suong's young son 'little monkey' is doted upon, but there's a distance developing with her husband Quoc (Chu Ngoc Hung), who's leaving for one of his habitual botanical photography trips. Middle sister Khanh (Tran Manh Cuong) tells her writer husband she's pregnant before he leaves on a trip to Saigon to research Tuan, a mysterious man in his mother-in-law's past. Lien keeps crawling into Hai's bed at night, causing him to fall out of it. The initial serenity we witnessed starts turning into a soap opera before coming full circle one month later, as the three women prepare their father's memorial banquet.

"The Vertical Ray of the Sun" is a contemplative piece where strong passions exist underneath calm exteriors. Sly humor, self deceit and harsh truths all exist in the cyclic screenplay. Tran Anh Hung and his cinematographer Mark Lee Ping-Bin ("Flowers of Shanghai") linger over and repeat the small gestures of everyday life - a wife washes her husbands hands, a woman makes water dance in a bowl, a man pulls his lover to face him before they part. Small spaces such as rooms, alleys and courtyards create intimacy. The color green, symbolizing life and tranquility, is used heavily in the film's visual styling, lapsing into yellowish hues and blues.

Writer/director Tran Anh Hung's film recalls Ang Lee's "Eat Drink Man Woman," another tale of three sisters of varying modernity coming together traditionally for a parent. But while Lee's more traditionally story-driven film resulted in radical changes for all concerned, "The Vertical Ray of the Sun's" characters strive for peaceful harmony. Watching it is like trailing your fingertips in a stream on a cool spring day.