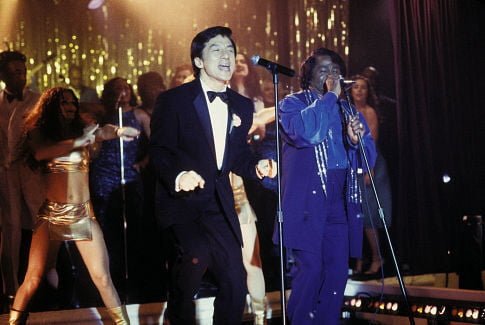 Jimmy Tong's (Jackie Chan) speeding tickets have almost lost him his job as a cabbie, but oddly, they help procure him an unsolicited job as chauffeur to mysterious millionaire Clark Devlin (Jason Isaacs, "The Patriot"). After a trip through a Burger King drive-thru, Tong saves Devlin from a car bomb, but Devlin's still badly injured, so he asks Tong to take his place by donning "The Tuxedo."

"The Tuxedo" is the first film I can recall to feature its (thankfully) one toilet joke before the opening credits roll. Typical of much of the humor in this film, it has little to do with the story. It's a true measure of Jackie Chan's charisma that he can keep a movie full of inept cliche afloat.

Tong discovers the power of the hi-tech tux (a partnered watch has control settings like 'attack,' 'shoot' and 'boogie down') fairly quickly, but it takes longer for him to realize that the Clark Devlin persona is a CSA agent code name that now belongs to him. To ratchet up the comedy, he's paired with greenhorn agent Del Blaine (Jennifer Love Hewitt) so that each can attempt to follow the other's lead. Tong begins by trying to avenge his beloved boss, who he believes fingered one Walter Strider, but in actuality the duo are up against Diedrich Banning (Ritchie Coster, "15 Minutes"), a bottled water magnate planning to introduce bacteria into the global water supply that induces thirst.

"The Tuxedo" begins (after those credits have run, anyway) with promise, as Chan and Isaacs exude buddy chemistry in their Green Hornet/Kato-like pairing, but once Isaacs is removed from the picture the film's narrative structure begins to go off the rails. Love-Hewitt appears to have some semblance of comic timing, but it is her introduction into the story that begins its downfall. Is the story incoherence the result of attaining her performance in the editing room or the result of inexperienced direction?

The screenplay (Michael J. Wilson and Michael Leeson) strains for laughs by including non sequiturs, such as having Del and fellow agent Steena (Debi Mazar) go to a shooting range for no other reason than to have male agents ogle their butts or for Tong to go to a canceled spy meet to give the password 'Nice rack' to the wrong woman. When Chan does his own thing, though, like trying to charm an art gallery clerk wearing a goofy grin and a Hooters tee or substituting on stage for James Brown, "The Tuxedo" delivers.

Debuting feature director Kevin Donovan (the Molson Canadian "The Rant" commercial campaign) uses some interesting camera angles (Chan reflected in a brass fixture, taxi action from the rear right wheel) but he can't smooth out the script conflicts. A gag involving a bug and a glass at film's climax is badly timed.

"The Tuxedo" should have been the vehicle for Chan that "The Mask" was for Jim Carrey. Alas, it's the man that makes the clothes.

Jimmy Tong (Jackie Chan) is a big city cabbie with a penchant for speed. He attracts the attention of sexy Steena (Debi Mazur) who hires Jimmy on the spot, after a harrowing ride through the crowded streets, as chauffeur for billionaire playboy and super spy Clark Devlin (Jason Isaacs). Devlin has only one rule: don't touch "The Tuxedo."

Newcomer helmer Kevin Donovan (he hails from the commercial world) is hamstrung by a badly handled screenplay of what is really an amusing concept - a high-tech tux that transforms its wearer into a superman. The script, by Michael J. Wilson and Michael Leeson (from the story Phil Hay, Matt Manfredi and Wilson), starts off well enough as suave Devlin struts his stuff wearing the titan tuxedo but the tale becomes a routine, fish-out-of-water situation comedy as, inevitably, Jimmy must wear the multi-million dollar suit and take the place of his employer in international intrigue.

This is where "The Tuxedo" begins to fall flat. Jackie Chan's draw has always been his amazing stunt choreography as he fights the bad guys using whatever device came to hand - whether it be major household appliances, power tools, monster trucks or a cluttered construction site. You always got a good look at the master doing his thing and could marvel over Chan's dexterity. In this latest showcase, director Donovan's commercial chops come into play and editing overwhelms Jackie's patented physicality. Instead of watching unadulterated action, we get rapid camera work, close-ups and fast inter-cuts to display Chan's stunts. As such, it looks more like special F/X and less like choreography and takes away a lot of the charm that Chan usually infuses into his films, even the bad ones. He is still a joy to watch, as always - even here.

Jennifer Love Hewitt, never a favorite of mine, does admirable yeoman's work as the constantly miffed rookie secret agent, Del Blaine. The actress is hampered by a character that starts off with a snotty tone of intolerance that never softens from the caustic beginnings until near the very end. Hewitt handles the action stuff well, as one would expect with Jackie Chan as her mentor, but never gets beyond the one-note character.

Bad guy Dietrich Banning, played by Ritchie Coster, is an amazingly un-menacing menace as the man who is about to unleash a calamity upon the world. Banning has pressured mad scientist Dr. Simms (Peter Stormare chewing scenery as usual) to invent a kind of water that not only doesn't quench your thirst, it dries you out - to the nth degree. The actor is saddled with cliché dialog and a really dumb story premise. This is unfortunate as a really good bad guy role can help save a mediocre movie.

Jason Isaacs is woefully underutilized as the suave super spook that is really a regular Joe beneath his platinum-card persona. Isaacs has become something of a bad guy icon since his perf as the dastardly Colonel Tavington in "The Patriot" so it is refreshing to see a more mirthful side to the actor. (Isaacs is a fine character actor and has also appeared, sans bad guy cloak, in such films as "Black Hawk Down" and "Windtalkers.") The problem with his Clark Devlin character in "The Tuxedo" is that the actor is not given nearly enough onscreen time. In this case more would be definitely better.

But, when you come right down to it, the reason most of us go see a film "starring Jackie Chan" is because of the sheer pleasure of watching this marvelous personality perform. The techs for "The Tuxedo" are OK with special F/X used to supplement Jackie's physical ability. I just wish there were more Chan and less editing - and a better script.