The Truth About Charlie 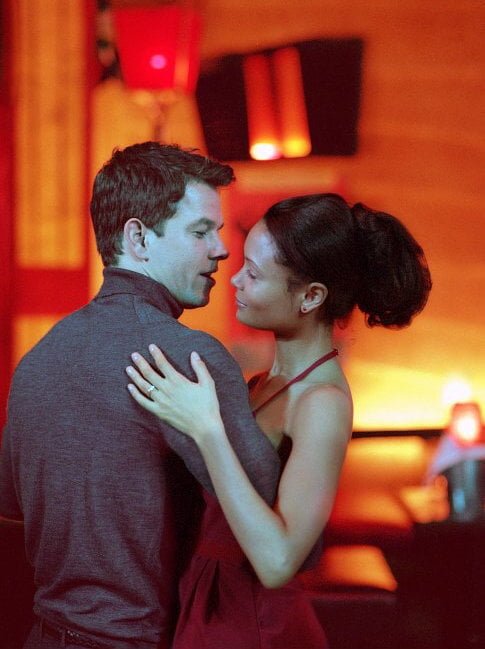 Returning home to Paris with divorce on her mind, Regina Lambert (Thandie Newton, "Besieged") finds husband Charles (Stephen Dillane, "Welcome to Sarajevo) murdered and her apartment and bank account emptied. Threatened by three of her husband's former colleagues and helped by a mysterious stranger (Mark Wahlberg) who always pops up at opportune moments, Regina is about to discover "The Truth About Charlie."

Jonathan Demme's ("The Silence of the Lambs") remake of the 1963 Stanley Donen classic "Charade" maintains the core story and location while giving things an entirely new spin. Paris locations inspired Demme to pay tribute to the French New Wave of the 1960's and his inspiration from a past generation's cinema makes "The Truth About Charlie" fresh, jazzy and fun.

Police Commandant Dominique (Christine Boisson) is suspicious of both Regina and her new found friend, but Regina agrees to work with her and Lieutenant Dessalines (Simon Abkarian). She's then hustled into a Ferris wheel by Mr. Bartholomew (Tim Robbins), an American agent demanding secrecy, who shows Regina a picture of Charlie as part of a special forces unit in the Bosnian war. Bartholomew warns that the other two men and women in the picture are all looking for the $6 million Charlie stole in diamonds and they all think she has it. One by one, Regina is contacted by the trio - Lola (Lisa Gay Hamilton), Emil (Ted Levin) and Il-sang (Joong-Hoon Park). They in turn implicate Joshua (Wahlberg), the man Regina's trusted and begun to fall for, who begins a chameleon act. It seems Charlie isn't the only man in Regina's life with a cover story nor the only dead body she'll encounter before the truth is known.

Thandie Newton owns this film. She has the elegance and gamine-like quality of "Charade's" Audrey Hepburn with the modern day ability to keep her lying lover at arm's length. Wahlberg can't be expected to fill the shoes of Cary Grant, but he's the lovestruck one here and he acquits himself well, even tossing off a line or two in French (wearing a beret no less). We want him to get the girl. Strongest support comes from Robbins, the only player to obviously tip his hat to his predecessor, (he flattens his line readings so that one can't but help think of Walter Matthau) and Boisson as the highly intelligent police officer.

Demme uses old pros like Charles Aznavour ("Shoot the Piano Player") and Anna Karina (Godard's early films) entertainingly with each popping up to sing plot advancing tunes in self aware scenes that fit this giddy film's mood. Filmmaker Agnes Godard ("Cleo from 5 to 7") appears out of an alley in a cameo. The director also names Regina and Joshua's lodgings Hotel Langlois after the man who founded the Cinematheque Francaise film archive (and the real hoteliers were so enchanted they kept the name after filming).

Tak Fujimoto's artful handheld camera, which was never once locked down during this shoot, captures today's Paris with a look that echoes the newness of the city we saw in "Breathless." Charlie, whom we only see before his demise on a passenger train, is kept 'alive' when his POV is used by Fujimoto's camera whenever his body's in the scene.

Demme, his crew and his actors kept me chuckling throughout this film with their inventiveness. "The Truth About Charlie" is a giddy ride, the romantic comedy thriller equivalent of this year's "The Bourne Identity." Stick around for Demme's self parody of "The Silence of the Lambs" over the closing credits.

In the 1963 Stanley Donen caper classic, "Charade," Cary Grant and Audrey Hepburn lit up the screen in a tale that was suspense thriller, romance, comedy and more. The superb supporting cast, great locations and the memorable Johnny Mercer/Henry Mancini score make this a film
that I can and do watch again and again. Jonathan Demme takes on the challenge of reinventing (not just remaking) that timeless film with a decidedly modern flair in "The Truth About Charlie."

Regina Lambert (Thandie Newton) returns home to Paris after a vacation on Martinique where she decided to divorce her always-absent husband of only three months, Charles (Stephen Dillane). Instead of facing Charlie, though, she finds their apartment stripped and ransacked and the police tell her that her husband was murdered - thrown out of a fast moving train.  Stunned by the shocking news, Regina then finds out from police Commandant Dominique (Christine Boisson) that she is a main suspect in Charlie's demise. If this isn't bad enough, three of Charles's cohorts make menacing moves and demand that she give them the $6 million that
Charlie had swiped from them.

Then, a handsome stranger, Joshua Peters (Mark Wahlberg), a guy she met briefly on her vacation, enters the picture and seems to genuinely want to help Reggie (as he, alone, calls her). Meanwhile, Regina is contacted by Mr. Bartholomew (Tim Robbins), an agent for the America CDA who tells her all about Charlie's exploits and the role he played in the intrigue that has sucked her in. Charlie, it seems, left his partners for dead on a botched secret mission in Easter Europe and took the $6 million in flawless diamonds they were to deliver for himself. After Charles's murder, Regina finds herself amidst a tempest to find the loot that starts costing people their lives.

If you're familiar with Donen's wonderful feature you won't be surprised by the story in "The Truth About Charlie" since the adaptation (by Demme, Steve Schmidt, Peter Joshua and Jessica Bendinger) is based on Peter Stone's terrific screenplay for "Charade." Almost all the elements
are the same so the who, what, when, why and how are already known - in my case, known quite well. The charm with "The Truth About Charlie" is that it puts a fresh face on the original material that should have good appeal to the sizable audience not familiar with the Grant/Hepburn vehicle. Familiarity definitely does not breed contempt, though, if you have seen "Charade," there will be little new here.

There was a Hollywood heyday quality about "Charade" with its old and new mega stars, Grant and Hepburn, and their larger than life personas.  There were also the great supporting perfs by Walter Matthau, George Kennedy, James Colburn and Ned Glass to add to the classical equation.  Demme keeps his film in a more ensemble-oriented mode and utilizes all
of his cast fully, including beefing up the role of the cop on the case, Commandant Dominique (Boisson).

Thandie Newton, while not having the extraordinary charisma of Hepburn, nonetheless commands the role of Regina and makes it her own. Reggie doesn't fall instantly head over heals for Joshua, also known as Alexander Dyle, who is the one who falls, hard, for her. Newton gives
Regina a survivalist's skepticism that can take the punches but is ready, willing and able to hit back if necessary. Mark Wahlberg ain't no Cary Grant, who was one of the key reasons that "Charade" is so memorable (and made the May/September romance with his costar
believable), but he holds his own as the nice guy trying to help Reggie.  Though billed first, Wahlberg is really the main support for Newton, who owns the film

Some scenes in "The Truth About Charlie" are direct remakes of the original while others are totally new and others, still, rep a reinventing of the old. For example, "Charade" has a cabaret scene with Grant, Hepburn and other party goers as members of an audience participation number involving moving an orange from one person to the next without using their hands. It's a whimsically comedic moment that is endemic of the light nature of the film. Demme uses a Parisian tango club, at about the same point in his film, to push the story along as all the players in the game pass closely to each other. The helmer must be given credit for his reinvention of the earlier movie instead of trying to recreated "Charade's" star spark. Instead, he creates a film
that is both traditional, in keeping with its source material, and new millennium hip.

The production design, cinematography, location selection and great music help make "The Truth About Charlie" something new and different for the generations that don't cotton to them old movies.

I strongly recommend renting "Charade" if you love movies. It is a great deal of fun. As for "The Truth About Charlie," it is worth the effort and provides it's own level of mirth and thrills for a brand new audience.