The Trials of Henry Kissinger 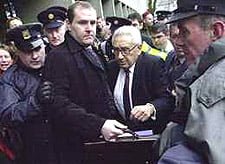 'Sometimes statesmen have to choose between evils.' -- Henry Kissinger

War criminal. Liar. Murderer. These are some of the terms that author Christopher Hitchens uses to describe Henry Kissinger, one time Secretary of State for presidents Nixon and Ford and the constructor of American foreign policy in the 60's and 70's that may have cost untold numbers of lives and millions, if not billions, of dollars. Documentary filmmakers Alex Gibney and Eugene Jarecki take Hitchens material and make their own case against the man in "The Trials of Henry Kissinger."

Journalist Christopher Hitchens, who has famously tackled such public figures as Mother Teresa, wrote a book, "The Trial of Henry Kissinger," proposing that the former U.S. Secretary of State and Nobel Peace Prize winner is a war criminal. Director Eugene Jarecki and writer Alex Gibney, who also coproduced their film, present a somewhat more open-ended debate on the question in their documentary with its cleverly rejiggered title, "The Trials of Henry Kissinger."

Although Nixon and Kissinger's guilt in the illegal bombing of Cambodia during the Vietnam war and US involvement in Pinochet's Chilean coup are well known facts, most boomers have probably grown up with a benign impression of Kissinger himself. Jarecki and Gibney dig beneath the charm and present a man who understood the power of celebrity well before the 'me' decade.

With Brian Cox ("L.I.E.," "The Ring") narrating, we're given Henry's ironic background. Having fled the Holocaust, Kissinger received a Harvard education and believed that the best preventative measure to keep history from repeating was the acquisition of power. The man made up of an ego conflicting with insecurities (shades of Richard Nixon?) then insinuated himself into American politics so well, that Daniel Davidson recounts that Kissinger offered him a White House position in September of 1968 - before the election! Just as we're being advised that 'the dark side of Kissinger is very, very dark,' editor Simon Barker cuts to footage of Nazis marching.

We're presented with evidence that Kissinger was instrumental in the collapse of the Paris Peace talks in 1968, an incident that greatly aided Nixon's campaign. Kissinger goes on to win the Nobel Peace Prize in 1973 for hammering out a deal almost identical to the scuttled LBJ one. The war didn't end until 1975. Thousands upon thousands of American and Vietnamese lives were lost in the interim and the secret Cambodian bombings not only killed 500,000 but threw that country into the turmoil that allowed the ascendance of the Khymer Rouge, who in turn slaughtered 3 million more.

Perhaps lesser known is Kissinger's tacit approval of Suharto using American weaponry to massacre 100,000 East Timorese, all surely 'a threat to the balance of world power.' The rare archival footage of the aftermath of this US sanctioned genocide is sickening.

As U.S. corporations worried about their investments under the Marxist Allende, Kissinger famously commented 'I don't see why we need to stand by and watch a country go Communist due to the irresponsibility of its people.' We're introduced to the son of Chilean General Schneider, who opposed a military coup, supporting the elected president, Allende. Schneider is presently suing Henry Kissinger for the wrongful death of his father, which opened the door for General Pinochet's reign of terror. To date, five countries have summoned Henry Kissinger for questioning in the investigation of Pinochet's regime. (It should be noted that U.S. involvement in Pinochet's coup is also blisteringly recounted in Ken Loach's segment of "11'09'01 September 11.")

Early in the film, Law professor Michael Tigar jubilantly recounts the arrest of Pinochet in London, exultant that a world court would take action for crimes against humanity. Later the filmmakers let others advise caution with this idea. Hitchens is present throughout while Alexander Haig calls him a 'sewer-pipe sucker.' A former Kissinger aide speaks admiringly of the man, then states he will never forgive him for wiretapping his own staff. Although the filmmakers attempt to provide balance, evidence against their subject is overwhelming - Kissinger himself is shown to be fearful of his connection to Pinochet.

Is Henry Kissinger the brilliant diplomat and intellectual who aided Nixon's efforts for detente with China and the Soviet Union or is he a war criminal every bit as guilty as those tried at Nuremberg? Gibney and Jarecki have it both ways.

This straightforward documentary chronicles Henry Kissinger's life with his arrival in America in 1938 at age 15 when his Jewish parents fled Hitler's Nazi persecution. It describes his hitch in US Army counter intelligence; his rise to academic prominence; becoming an influential political advisor to Nelson Rockefeller and, then, on to fame with Richard Nixon. But, this is far from being a complimentary document of Kissinger's life. It is inspired and spawned by Hitchens's book The Trial of Henry Kissinger that indicts the past US Secretary of State for crimes against humanity.

If Gibney and Jarecki are correct, Richard Nixon and Kissinger "conspired" to sabotage the developing Vietnam peace accord being brokered by Lyndon Johnson and his chosen successor, Hubert Humphrey, in 1968. While Kissinger worked unofficially as an advisor to the American negotiators, he secretly funneled sensitive information to the Nixon campaign that served to discredit the peace talks and get the Republican candidate elected president of the United States. If this is true, Kissinger may have been responsible for making the Vietnam War continue for a long and bloody five additional years with hundreds of thousand or, maybe, millions of lives senselessly lost. And, according to Hitchens's copious documentation, this is just one of Kissinger's lengthy list of what, for others like Augusto Pinochet or Slobodan Milosevic, would be convictable war crimes.

Graced with volumes of video accounts of Kissinger's life while in the public's eye, the docu-makers discuss his appointment as Nixon's national security in 1969 and rise to the lofty position as Secretary of State. In this post he is renown for his participation in the Paris Peace Talks that ended the Vietnam War and for opening up China to the west. But, he is also regarded as being the strategist who secretly escalated the war into Cambodia in an action that dropped more explosives, illegally, than were expended on Japan in all of World War 2. He and Nixon masterminded the Christmas bombing of Hanoi in 1972 in a costly effort to force the North Vietnamese to the negotiation table. Kissinger was also a key figure in the all out invasion of American land forces into Cambodia - a blatantly illegal move.

Kissinger's list of atrocities weren't limited to Vietnam, either. He was directly involved in the overthrow, in 1973, of democratically elected Chilean President Salvatore Allende - Kissinger was quoted, at the time, "I don't see why we need to stand by and watch a country go communist due to the irresponsibility of its people." He allegedly sanctioned the sale of arms to Indonesian President Suharto that led to that country's invasion of tiny East Timor. Hundreds of thousands needlessly died as a direct result of Kissinger's political machinations and dealings per Gibney and Jarecki.

Henry Kissinger, the docu-makers show, was also quite the bon vivant with the ladies who are attracted to a man of such power. What the makers also expose is the fact that he used this social attraction to parlay his fame as a party guy and use it to gain more political intelligence. This, in turn, helped him garner even more power. Ego and insecurity, the filmmakers say, drove the man to great lengths to gain personal political influence, regardless of the cost - either in lives or dollars.

Much of what Gibney and Jarecki have to say about the life of Henry Kissinger is already well known, but there is much new information, too - the most devastating and damning is his duplicity in extending the tragedy of the Vietnam War simply for the power it will afford him. The millions of lives lost and billions of dollars expended should be sufficient evidence for the trial which Christopher Hitchens and the doc makers so painstakingly build their case. There are shocking revelations to be had in "The Trials of Henry Kissinger" making it a worthwhile work to see. The structure of the documentary is routine but the scathing indictment of Kissinger is a real eye opener.