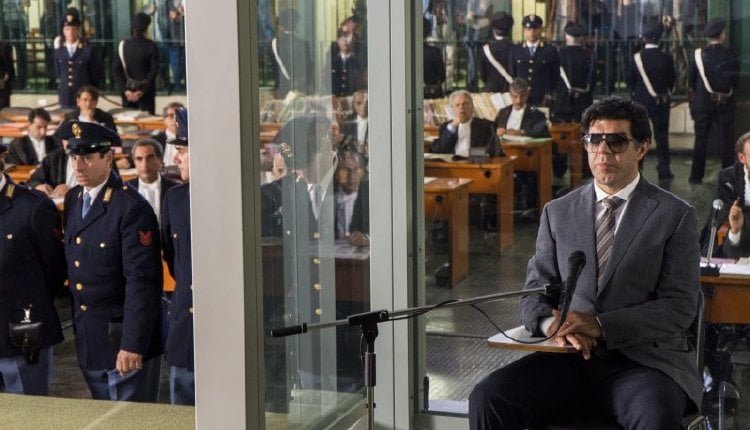 In 1980, Cosa Nostra soldier Tommaso Buscetta (Pierfrancesco Favino, "Rush," "My Cousin Rachel"), aka Don Masino, attended the Feast of Saint Rosalia in Palermo along with his third, Brazilian wife Cristina (Maria Fernanda Cândid), as Palermo’s preeminent families wrestled over heroin trafficking rights. Disgusted by the behavior of his adult, addicted son Benedetto (Gabriele Cicirello), Buscetta ignored the pleas of his wife and left his kids behind, moving to Brazil and, he thought, away from the mob. Extradited back to Italy in 1984, Buscetta, believing Corleonesi head Totò Riina (Nicola Calì) had abandoned the ‘ideals’ of the Cosa Nostra by killing women and children in addition to two of his sons and his brother, agreed to cooperate with Judge Giovanni Falcone (Fausto Russo Alesi) for the infamous Maxi trial which would result in almost 500 arrests and convictions while he was branded “The Traitor.”

Cowriter/director Marco Bellocchio’s ("Vincere") epic tale of the man who brought down the Italian mob (Italy’s submission for the International Film Oscar) is probably easier to dive into in its home country where one presumes Buscetta’s story is as well known as Whitey Bulger’s is in Boston. (The film begins with a ton of title cards and identifying name tags which go by too quickly to keep up with.) But the Palermo Cosa Nostra has a much larger cast of characters, Buscetta himself the youngest of seventeen children, Corleonesi hits noted with a number counter that begins somewhere in the 70’s(!). Bellocchio also doesn’t help too much differentiating Palermo from Brazil as he skips back and forth in time and across the Atlantic.

Once Buscetta begins to talk to Falcone, though, everything settles down, prior events clicking into place. Buscetta balks at being named an informer, never missing an opportunity to pin the downfall of the mob which he helps to engineer on Riina’s nasty tactics (he is particularly incensed that the man had a vengeful young son’s arm chopped off before he was killed). Masino, you see, has ideals, largely illustrated by his tale of an early contract he took decades to carry out, his target always drawing his son in front of himself as a shield, forcing Buscetta to wait until the evening of that young boy’s wedding day – how gentlemanly!

Unfortunately, that is also about as much character development we get on the subject of this 135 minute film. When Tommaso is threatened on board a Brazilian helicopter by the sight of his wife being held from the door of another flying in tandem, we are not sure if the man who loved women is going to relent. A jail house reminiscence with hit man Totuccio Contorno (Luigi Lo Cascio, "The Best of Youth"), who follows Buscetta’s lead in giving evidence, shows how enthusiastic prostitutes were provided during a former incarceration (along with caviar and champagne!), a scene that is a genre classic along with the requisite Catholic rites of passage.

The film packs its biggest punch during the Maxi trial, with Buscetta in a glass booth in an environment like a gladiator’s arena, those accused caged behind him in a row groups, their shouted accusations quieting after Masino shreds his first cross examiner. Bellocchio livens up the proceedings by visualizing Buscetta’s dreams (in one, his family enter his cell like a funeral procession bearing floral tributes and a coffin) and a montage of newspaper headlines laid over images of scurrying rats. Buscetta’s long time friend, Pippo Calò (Fabrizio Ferracane), is one of the primary rodents, revealed as one of his sons’ killers.

Buscetta and his family’s entry into the U.S. witness protection program sees them move from Salem, NH to Fort Collins, CO and eventually Miami, Buscetta continually looking over his shoulder. He’ll be extradited again, caught up in the scandals of Prime Minister Giulio Andreotti (Giuseppe Di Marca). Incredibly, the man who, like “The Godfather’s” Don Corleone, thought that drug trafficking brought the mob low would achieve the highly unusual feat of dying in his own bed. “The Traitor” tells a chaotic history of the downfall of the Cosa Nostra through the eyes of the man who rejected the titular title. Yet while Bellocchio delivers one of his most spectacular scenes with the car bomb hit on Judge Falcone, we get no update on the current pulse of the Cosa Nostra.