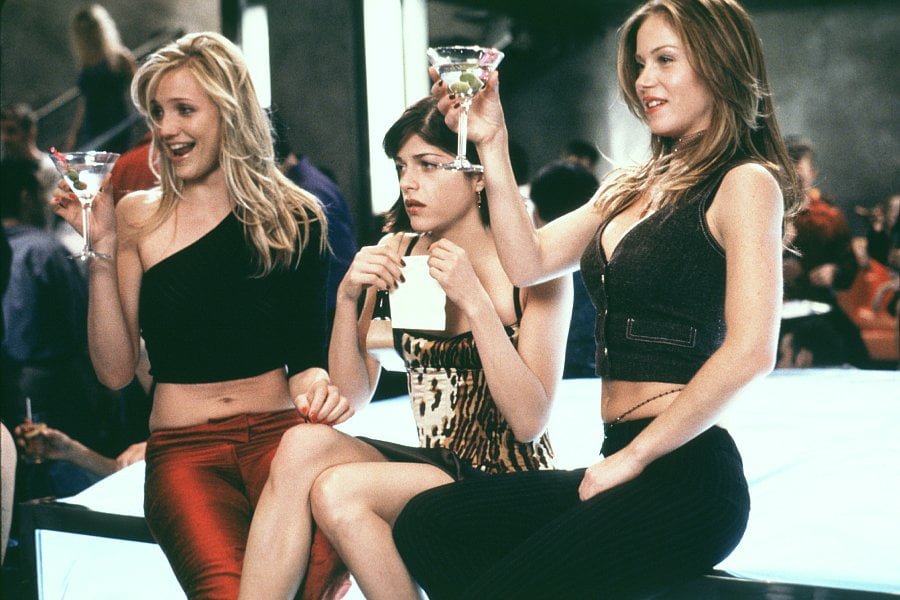 Christina Walters (Cameron Diaz) is a swinging single who shimmies up San Franciscan hills to keep her shape. When her good friend Jane (Selma Blair, "Storytelling") gets dumped, Christina advises not to look for "Mr. Right," but "Mr. Right Now." Christina and third buddy Courtney (Christina Applegate, TV's "Married With Children") drag Jane to a club to do just that, but Christina can't follow her own advice when she meets Pete (Thomas Jane, "Deep Blue Sea") in "The Sweetest Thing."

Cameron Diaz shows incredible lack of judgement in taking the starring role in this rancid romantic 'comedy.' It's as if Diaz wants to be Hollywood's new 'guys' gal. Carole Lombard played this role in the 40's by hunting, fishing and swearing with Gable and his cronies, but Diaz is doing it by making her own "Porky's" and it ain't pretty.

The film starts promisingly enough with a standard montage of Christina's exes singing her praises. She's intrigued by Peter when he doesn't instantly succumb to her charms, but when she and Courtney hit the road to crash his brother's wedding, "The Sweetest Thing" turns sour.

Jokes revolving around semen-stained frocks, maggoty leftovers and exploding urinals are distasteful and a gag involving a piercing and oral sex is not only painfully unfunny, it doesn't make sense. A dressing room montage was apparently amusing to the participants.

Diaz wears out her welcome in her most charmless performance. Selma Blair has spent too many roles with her mouth full and should seriously consider moving on. Christina Applegate is one of the (very) few pleasures in this film, particularly in a little amusing throwaway performed with new husband Jonathon Schaech. Jane is bland, Parker Posey has a worthless cameo as the bride and while it's nice to see Georgia B. Engle (TV's "The Mary Tyler Moore Show"), it's a pity she's given such a nonsensical character to play.

Director Roger Kumble ("Cruel Intentions") doesn't even make his film look good, with one exterior scene looking like the actresses were placed in front of rear projection. Exactly one gag works - a fantasy where Diaz imagines herself being serviced orally while eating ice cream. There's also an odd little homage to "So I Married an Axe Murderer," but I doubt many will notice.

If Diaz wants to videotape her bawdy slumber parties, she can do it on her own time.