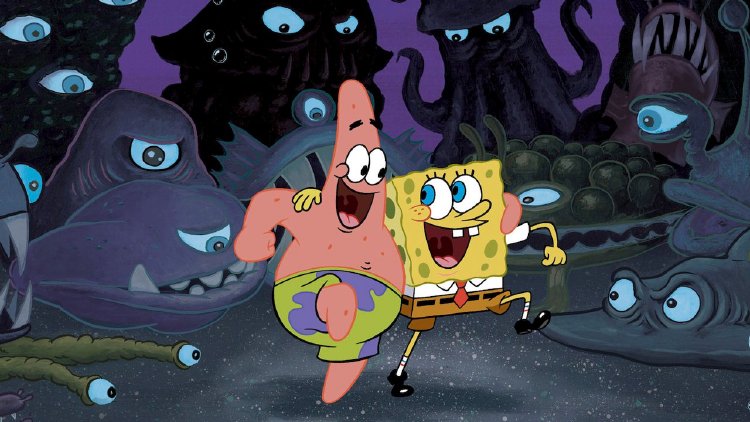 Nickelodeon's unlikely undersea hero leaps to big screen stardom along with all his aquatic pals in the aptly named "The Spongebob Squarepants Movie."

If you, like me, have never been exposed to Spongebob, be forewarned that recreational drugs may be a necessary component of the experience. All kidding aside, the off the wall world created by the film's cowriter/director Stephen Hillenburg is oddly compelling, like "Ren & Stimpy" in another dimension without the grossout humor.

The eternally optimistic Spongebob (Tom Kenny) awakens in his pineapple home in Bikini Bottom beneath the sea convinced that his boss, Mr. Krabs (Clancy Brown), is going to promote him to manager at the grand opening of the Krusty Krab 2. That slot goes to his pessimistic coworker Squidward (Rodger Bumpass) because, Mr. Krabs says, Spongebob is 'just a kid.' But Spongebob gets to prove his mettle when Plankton (Doug Lawrence), the competing owner of the unsuccessful Chum Bucket, steals King Neptune's (Jeffrey Tambor, TV's "Arrested Development") crown to put the masses under mind control. Encouraged by King Neptune's daughter, Mindy the Mermaid (Scarlett Johansson, "Lost in Translation"), Spongebob and his best buddy Patrick (Bill Fagerbakke) set off in the Patty Wagon ('You don't need a license to drive a sandwich!') for Shell City, one of those notorious places no one ever seems to return from, to return Neptune's crown and free Mr. Krabs.

Spongebob and Patrick (under full flush of his first crush) are thrilled to receive 'moustaches' from Mindy, in order to make men out of them for the trip, but no sooner has the journey begun that the seaweed appendages are exposed by Dennis (Alec Baldwin, "The Cooler"), a hit man hired by Plankton. Yet the invertebrate pair overcome everything in their path towards Shell City, where Neptune's crown awaits amidst unimaginably ghastly horrors.

Hillenburg's creatures feature the bloodshot eyeballs of Kricfalusi characters and sovereigns who seem to have wandered in from Jay Ward's Fractured Fairy Tales. Animation ranges from simplistic, flat renderings to such detail as the light play of the rippling reflection of the ocean's surface on its floor. Human figures are mixed in with the action, which begins with a bunch of singing pirates making shore to pile into a movie theater, climaxes with a faceless Jules Verne style deep sea diver followed by Baywatch's David Hasselhoff as a human speedboat. The writing is hilariously skewed from the ice cream 'drunk' at Goofy Goober's to the blood-curdling threat of glue and googly eyes. The wacky soundtrack features The Flaming Lips, Wilco and Avril Lavigne.

"The Spongebob Squarepants Movie" celebrates childhood while hopefully proving there is still life in traditional hand drawn animation. Aquarium and seaside gift shops may never seem the same, though.