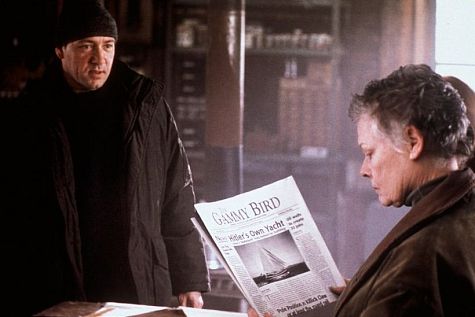 Quoyle (Kevin Spacey) lives a pointless existence as a newspaper inker who has the unfortunate luck to fall for Petal (Cate Blanchett), a good-lookin' ne'er-do-well if there ever was one. She marries him, uses and abuses him and, finally, takes off with their daughter, Bunny (Alyssa Gainer). Quoyle learns that his frequently unfaithful wife died in a car crash, but not before she sold Bunny to a black market adoption operation for $6000. Stricken, but with his daughter back, Quoyle is convinced by his Aunt Agnis (Judi Dench) to come back home to Newfoundland in Lasse Hallstrom's adaptation of E. Annie Proulx's best-selling novel, "The Shipping News."

Quoyle (Kevin Spacey, K-PAX) is haunted by the memory of his father's swimming lesson.  The young boy almost drowned after being tossed off a pier and goaded by dad.  His imagined failure will haunt his formative years where he drifts through a series of menial jobs until landing as an inker at the Poughkeepsie News.  Circumstance places him in the path of bad-news Petal (Cate Blanchett, "Bandits"), whom he marries and has a daughter, Bunny, with.  When Quoyle returns from a short trip to collect the ashes of his parents, he returns to discover that Petal ran away with an appalling agenda and died in a car crash.  It's at this lowest point that Quoyle's savior arrives in the form of Aunt Agnis (Dame Judi Dench, "Iris"), who convinces him to return to Newfoundland, the home of his ancestors, in "The Shipping News."

Swedish director Lasse Hallstrom ("My Life as a Dog") delivers a Christmas-time Miramax Oscar hopeful for the third year in a row with "The Shipping News."  While not as successful an adaptation as "The Cider House Rules," his latest is more deserving of consideration than last year's prefab "Chocolat."

I wasn't a huge fan of Annie Proulx' novel, finding the main character difficult to empathize with and the structure, with its quirky characters dotted throughout, derivative.  Robert Nelson Jacob's adaptation does it justice nonetheless, but Kevin Spacey's performance does little to lift Quoyle's character out of 'sleepingwalking through life' mode.

Agnis introduces Quoyle and Bunny to the Quoyle family homestead, abandoned for 44 years and lashed by cables to an ocean bluff overlooking wild seas.  Quoyle declares the house uninhabitable while Agnis delights in finding a remembered table amidst the decay.  We also quickly learn that Agnis didn't visit Quoyle to pay respects to her deceased brother, but to denigrate his loathed memory when she dumps his ashes down the outhouse before doing her business.

Quoyle's put in touch with Jack Buggit (Scott Glenn, "Training Day"), the owner of the local paper, The Gammy Bird, who gives him a job as a journalist over Quoyle's own protests.  Assigned to cover car crashes, he keeps visualizing Petal.  Assigned to gather the shipping news, he produces a list from the harbor master.  It's not until some mentoring by photographer Billy Pretty (Gordon Pinsent) and some nudging to look behind his list by Buggit that Quoyle finds his talent.  Tert (Pete Postlethwaite, "Rat"), the paper's editor, thinks he's hanging Quoyle out to dry by putting his tale of Hitler's yacht on the front page, but it his plan backfires and Buggit gives Quoyle a weekly column and a computer.

As Quoyle's self esteem is rising in his new profession, he begins to try and court local single mother Wavey (Julianne Moore, "Hannibal") and work through the oddness of his daughter Bunny, who sees ghosts.  He works through his fear of the water by taking to it in his own boat. Skeletons begin to tumble out of family closets when Quoyle makes a discovery that almost causes him to drown a second time.

While Spacey's Quoyle never really engages and Moore's Newfoundlander Wavey is Irish accented and lacking depth, the Gammy Bird's staff and Quoyle's family feature strong performances across the board.  Dench has a character to work with here (unlike "Iris," where she still managed to give a great performance) and she's thoroughly convincing.  Cate Blanchett hasn't had a misstep yet and her trashy Petal is no exception.  Scott Glenn is charming as the intuitive newspaper owner who's a fisherman at heart, family curse or no family curse.  Rhys Ifans ("Notting Hill") gives a coy, charming turn as Nutbeem, an Englishman who sailed in on a Chinese junk and never left while the unknown Pinsent makes his mark as a true newspaperman. Larry Pine and Jeanetta Arnette deftly carve full characterizations with little screen time as the unfortunate yacht owners, the Melvilles.

"The Shipping News" has a weak headliner, but it's fleshed out by its bylines.

There are a number of literary works being turned into films these days with some fine adaptations hitting the big screen and Helmer Hallstrom extends his recent successes ("The Cider Hose Rules" and "Chocolat") with "The Shipping News." While the film is a good work of art with some superior performances, it most of all captures the essence of Proulx's novel and, especially, the look, feel and flavor of the wild Newfoundland coast.

Following his tragic loss, the despondent Quoyle agrees to pack up and move back to the family home in Newfoundland. The ancestral abode is located high on a wind-buffeted bluff overlooking the chill Atlantic and Aunt Agnis relates the story of how, a century before, the house was dragged to its present location by Quoyle's family in a dispute with their neighbors. Meanwhile, Quoyle goes to the local newspaper for a blue collar printer's job but, instead of being brought aboard as an inker, the owner of The Gammy Bird, Jack Buggit (Scott Glenn), hires him on the spot to write the paper's shipping news. Life is changing for Quoyle, especially when he meets Wavey (Julianne Moore), a pretty widow raising his simple little boy, Harry, by herself while supporting them as the town teacher.

"The Shipping News" is a loving recreation of Proulx's uncomplicated story about a man returning to his roots and finding a niche for himself and his daughter in his long-estranged home town. Before being rescued by his aunt, Quoyle had, to say the very least, a bad marriage with his hell-on-wheels wife, Petal. She not only didn't dignify the marriage with fidelity, she would call her husband from the bars where she meets other men with questions like, "How do you make an Alabama Slammer?" When questioned why by Quoyle, her response is along the lines of "Hell, I'm in a bar in Alabama!" She finally leaves her cuckolded husband for parts unknown, only to be killed in a car crash. Her death is the catalyst that prompts the life changes that will impact Quoyle and daughter Bunny.

The actors in "The Shipping News" envelop their characters, convincingly becoming the people they portray. Kevin Spacey gives his best performance since his Verbal Kint in "The Usual Suspects" as Quoyle, who he starts out as a weak willed person starved for love and finds it - with the most wrong woman you can imagine, and then she died. A mere shell of a man, he is rescued by Aunt Agnis and, once home again, he begins a new, fulfilling life. Spacey puts an arc on his perf that gives it a genuine and complex feel. You believe it as he takes on (almost forced into it by boss Jack Buggit) the job of reporter for the local news rag. His responsibility for the shipping news - the ins and outs of the ships visiting the little port town - leads him into a literary career that revolves around the community and begins with his first story about Hitler's yacht. Despite some resistance Quoyle becomes an integral part of the community and eventually breaks from his grief over Petal. Spacey's is a memorable performance and one of the best of the year.

Julianne Moore, unfortunately, is not up to the task fulfilled by the rest of the solid cast in her important role as Wavey. She seems so intent on creating a "real" Newfoundland accent she overdoes it and neglects creating the character. Conversely, the supporting players are uniformly good to great. Cate Blanchett positively sizzles playing out of her usual good-guy roles as the anything-but-good Petal. Judi Dench, as the Quoyle family backbone, Aunt Agnis, instills ambition into the lax Quoyle and teaches him resourcefulness, especially when she decides to rebuild the family manor with its quite varied and mysterious past. Scott Glenn is both amusing and a muse to Quoyle and gives him his first real chance, continuously pushing and encouraging the hapless reporter to realize his full potential. Character actor Gordon Pinsent is Billy Pretty, Quoyle's co-worker, mentor and advisor on what the newest employee of the "Bird" has to do to succeed (and stay employed). Pete Postlethwaite is sly, weak and has ambitions as Jack's toadying assistant manager Tert X. Card. Rhys Ifans puts the right spin on the expatriated Englishman, Nutbeem, an oceangoing journalist stranded in town 'til his Chinese junk is repaired.

Quoyle's family past is the underlying story of "The Shipping News" and is beautifully handled by Hallstrom, cinematographer Oliver Stapleton and the production team as the Quoyle house, in flashback, is dragged across the frozen sea to its current home. As the story of Quoyle's ancestors unfolds the reason for this arduous journey is brought out and the man learns the real truth about his family's sordid history. The techs are solid all around and the stark Newfoundland and Nova Scotia settings are a big plus. The screenplay adaptation of Proulx's novel by Robert Nelson Jacobs artfully and deftly captures the essence of the book without trying to recreate every detail.

The images of Quoyle's childhood help show how he came to an adulthood of such low esteem. His tyrannical father, in an effort to "teach" his son how to swim, simply throws the boy off of a pier, nearly drowning the lad. This drowning theme returns again and again throughout the film, usually metaphorically but also, at times, for real. There are odd touches to the story, too, as when the owners of Hitler's private yacht come to visit the town. Their story has a significant impact on Quoyle development from hapless schlemiel to an integrated member of The Gammy Bird staff and the town.

There are, finally, a bunch of award-worthy films coming out lately and "The Shipping News" is, thankfully, one of them. It may not be the best film of the year, but it has some of the best acting and techs out there.