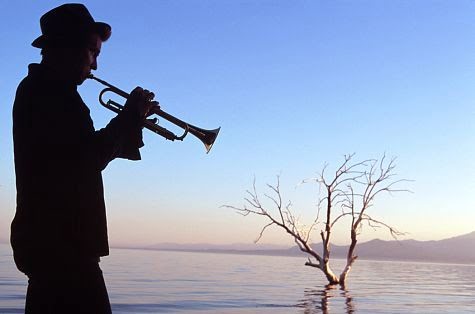 When Danny Parker's (Val Kilmer) wife is murdered, he loses his identity. Hanging with a bunch of LA tweakers (methamphetamine addicts), Danny snitches on the side to cops Morgan (Doug Hutchison, "The Green Mile") and Garcetti (Anthony LaPaglia, "Lantana"). Unbeknownst to the cops, though, he hopes to make one big score bankrolled by Bubba (B.D. Wong, "The Freshman"). With only his buddy and fellow tweaker Jimmy the Finn (Peter Sarsgaard, "Boys Don't Cry"), Danny tries to play the game with the notorious and volatile Pooh-Bear (Vincent D'Onofrio, "Happy Accidents") in "The Salton Sea."

Val Kilmer blows his horn against a wall of flames while his narration offers up two possible identities - the happily married man he once was and Danny Parker, the tweaker trying to expose his wife's killers. This "Memento"-like storyline doubles back near its end to make us reevaluate what's come before. Feature debuter D.J. Caruso directs a crack ensemble cast, bringing screenwriter Tony Gayton's ("Murder by Numbers") narcotics noir to life.

Days and nights for Danny are indistinguishable, running into one another as the highs spent with Finn, Kujo (Adam Goldberg, "A Beautiful Mind") and assorted hangers on gradually peter out. When Danny's out and about, he's either informing or vaguely rescuing his battered neighbor Colette (Deborah Kara Unger, "The Hurricane"). He crosses a line when he meets Pooh Bear, leader of a dangerous posse of desert meth cookers who has snorted so much of his own product, his nose had to be removed.

Gayton's script subtly readjusts character perceptions as Danny fills in the gaps with increasingly clearer flashbacks of his wife's murder. While the story unfolds languidly, interest never wanes because of the humorous punctuation delivered throughout. Zoning with the tweakers? Time for Kujo's recitation of his 'big heist,' where he and his cronies steal Bob Hope's stool sample to sell on eBay. Danny's big score-making talk getting dull? Bring on Pooh-Bear and his psycho pigeon reenactment of the JFK assassination. When the humor fades, the story twists take up the slack, but "The Salton Sea" eventually does begin to seem like it's unreeling in fits and starts.

The cast is to be commended. Val Kilmer grounds the film with his weary speeder. He's a believable rarity as an addict who appears to maintain control. D'Onofrio lets fly with his air-sucking sociopath, all boyish overbite one second, sadistic drug lord the next. (He does remove the nasal prosthesis once, showing his profile with a background computer monitor conveniently acting as a practical blue screen.) Sarsgaard's Finn glows from within. When the naive, excessively loyal Jimmy asks Danny who JFK was, he breaks your heart by thanking Danny for not laughing at him. While these three are the standouts, everyone from Goldberg to Kara Unger to Luis Guzman, Danny Trejo, Glenn Plummer and B.D. Wong contributes to the film's jazzy, off-kilter hooks.

Cinematography by Amir Mokri ("The Joy Luck Club") is stunning, playing up the brightness of the desert against the darkness of the tweakers' world. At one point, the stucco walls of Danny's shabby apartment shimmer like water's surface. Music is well integrated into the wildly diverse goings on, never more so that when the 'doo-doo-doo' chorus of "Walk on the Wild Side" plays to Kujo's stool sample fantasy.

The Salton Sea is a strange byproduct of nature outside of L.A., making it an apt title for this off-beat study of L.A's fringe dwellers.

A man sits in silhouette against the backdrop of an out-of-control blaze. He wears a fedora and plays a jazzy number on his trumpet like Nero playing his fiddle as Rome burned. The resigned voiceover by Danny Parker (Val Kilmer) tells his story about a man in crisis, struggling with his present and past as he asks the audience and himself, "Who am I?" This begins the complicated character study that plunges us into the abyss of crystal methamphetimine addiction and a journey of redemption in "The Salton Sea."

First-time feature helmer D.J. Caruso takes the imaginative screenplay by Tony Gayton and, with the talented Kilmer and an outstanding supporting cast, builds a complex story about a man who appears to be a burned out "tweaker," an abuser of crystal meth who loses track of days of time as he and his friends binge out on "gak." But, as we watch Danny work up a big deal with the local meth baron, Pooh Bear (Vincent D'Onofrio), we learn that there is more to the man than just drugs.

As the plans for the deal develop we learn of the many facets of Danny Parker. At one point in his past he was happily married to beautiful Liz (Chandra West) until a misbegotten stop, while on vacation, to get directions. The couple unknowingly pick the home of meth dealers for help and things end in tragedy when a pair of masked gunmen attack the place and Danny must helplessly watch as on of the killers summarily execute Liz before his eyes. Jump to the present and we find that Danny works, under duress, for a pair of corrupt cops, Garcetti and Morgan (Anthony LaPaglia and Doug Hutchison), who are looking for their own score against drug lord Pooh-Bear. Meanwhile, Danny is trying to muster the cash for the drug deal with the help of Asian cowboy Bubba (B.D. Wong)

This is a little, independent effort that benefits from a number of qualities. Val Kilmer, for instance, gives a complex character study on his Danny persona. He is a man that, emotionally, is a meth tweaker and dealer trying to put together a big score. His duality, and the strains it imposes on him, is laid out gradually as the film progresses. Danny is not just another meth slammer and there are sides to the character that unfold as we delve deeper into his life. He is weaving a tapestry but we don't know, at first, just what kind of fabric he is creating. Danny is rousted time and again by a pair of corrupt cops, but is working for a slick Asian cowboy whose own agenda unfolds as we watch the film

Vincent D'Onofrio, as meth dealer Pooh Bear, reps one of the most imaginative bad guys in film these days. The noseless dealer - he snorted too much of his own product and his proboscis fell off - is ruthless, amusing (he stages a reenactment of the Kennedy assassinations with a small radio controlled car with pigeons sitting in for the doomed president, first lady, etc.) and uncontrollably violent.

The rest of the cast is also first rate, especially Peter Sarsgaard as Danny's best friend Jimmy "The Finn." Jimmy is a simple, innocent young man who quite literally loves his friend and will do anything for him. Deborah Kara Unger ("The Game") has terrific presence even though she is underutilized in a plot line that seems tacked on. She is the abused lover of Quincy (Luis Guzman) that the widowed and lonely Danny falls for even though their possible relationship goes unrequited. The script, like the character Danny, is complex and needs your attention as the lead character's story weaves intricately through the film. The music, particularly the soulful trumpet tunes that bookend the film, is first rate and fits the funky mood of the film.

"The Salton Sea," like previous drug addiction-related film like "Requiem for a Dream" and "Trainspotting," is not an easy flick as it shows us the denizens that inhabit the underbelly of society and all their corruptions.