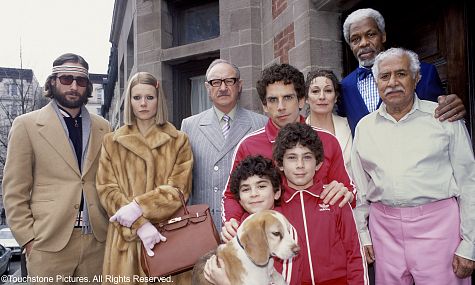 Broke and homeless, Royal Tenenbaum (Gene Hackman) decides to make peace with his estranged family by faking stomach cancer. International financier Chas (Ben Stiller) is obsessed with safety and overprotective of his children after losing his wife in a plane crash. Playwright Margot (Gwyneth Paltrow) won a $50,000 grant in the ninth grade but is a depressed, nonproductive adult. Richie (Luke Wilson, "Legally Blonde") was a tennis prodigy who won the U.S. Nationals three years running, but suffered a breakdown when his adopted sister Margot got married. Now they're all dysfunctional and hostile to dad in writer/director Wes Anderson's "The Royal Tenenbaums."

Cowriter (with Owen Wilson)/director Wes Anderson takes the eccentric interests of "Rushmore's" teen playwright Max Fischer and applies them to an entire family of geniuses in his quirky homage to the literary New York City, "The Royal Tenenbaums." While his new film is blessed with a terrific cast and is lots of fun, it never takes off into the inspired stratosphere of "Rushmore."

As Etheline (Angelica Huston) begins contemplating the charming proposal of her accountant Henry Sherman (Danny Glover), her children all begin returning to the nest. First Chas arrives with his two matching curly-topped, running suited boys complaining about the lack of sprinklers in their apartment. Then Etheline responds to a call from Margot's husband Raleigh St. Clair (Bill Murray) and finds her daughter as he described her, locked away in the bathroom watching TV in the tub (and hiding her long secret smoking habit). Leaving neurologist Raleigh with his research subject Dudley, the depressed young woman returns home, where she carries on an affair with Eli (Luke Wilson), their childhood neighbor who always wanted to be a Tenenbaum and fits the mold, having developed into a drug addicted author of silly but popular Westerns. Richie, who's written Eli about his long suppressed love for Margot, also returns, setting up a tent in his bedroom where he can continue his now deeper heartbreak and join forces with Raleigh hiring a private detective.

It's Indian house servant Pagoda who tips off Royal about Etheline's proposal, turning the dishonest, cheating spouse into a jealous opportunist. Etheline can't resist Royal's cancer story, and with Richie's support, he's ensconced in an upstairs bedroom where his former elevator man Dusty (Seymour Cassel, "Rushmore") acts as his physician. Chas wants no part of him and Margot is generally under-enthused. Royal surprises himself by his desire to reunite his family and begins by teaching Chas' kids, Ari and Uzi, how to have fun in ways that would make their dad's hair straighten. When Royal's latest lie is uncovered by the motivated Henry, he and Pagoda are tossed out, but Royal's new presence in the family's life works odd little miracles.

Clearly, Gene Hackman is having tons of fun as the roguish Royal and it's a treat to see him metamorphose like this season's Grinch. Huston is a delight as the family's pillar of supportive strength, made girlish by the attentions of a new man. Paltrow goes the farthest from any character she's played before as a prodigy playwright who could have been imagined by Edward Gorey. Luke Wilson provides the yearning for love at the heart of the story while brother Owen entertains with another of his spacy characters. The normally reliable Ben Stiller is the weakest link, his portrayal more caricature than character while Bill Murray, so marvelous in Anderson's "Rushmore," is underutilized here. Glover is just right as the deferential accountant whose dependable goodness is the opposite of Royal's flashy trashiness.

The film's production design by David Wasco is among the very best of the year. The Tenenbaum mansion is a warm old home most perfectly evoked by the closet full of old games where Royal indulges in martinis with Pagoda. Costume designer Karen Patch is as important as the actors in creating this group of oddballs, with Margot's lacross dresses and loafers covered by an old mink, Royal's swinging 70's getups, Etheline's pastel suits and Henry's royal buttoned down blue blazers. Music is eclectic from a "Hey Jude" cover to selections from "A Charlie Brown Christmas." Anderson and Wilson's script brings a family to life amidst such gonzo details as Chas' boyhood science project of dalmatian mice which still run about the house to a pervasive fleet of beat up Gypsy cabs.

"The Royal Tenenbaums" is the sweetest eccentricity.

The Tenenbaum children were a precocious lot as kids. Chas (Ben Stiller) was a real estate investment genius in his early teens; Margot (Gwyneth Paltrow), the adopted Tenenbaum, was an accomplished playwright and received a Braverman Grant for $50000 when a ninth grader; Richie (Luke Wilson) was a tennis progeny and won the U.S. Nationals three years running. Then, their parents got divorced and the brilliance of their early lives was erased by betrayal, failure and tragedy - most of which is blamed on their father, Royal (Gene Hackman). Now, dad is back and claiming to have only weeks left to live and wants to return to the fold of his estranged wife Etheline (Angelica Huston) and his children in "The Royal Tenenbaums."

Helmer/co writer Wes Anderson has established himself as the maker of quirky little films about quirky, likable people. With his debut feature, "Bottle Rocket," he introduced the Wilson brothers, Luke and Owen, to us and created an offbeat and goofy crime comedy. His second film, "Rushmore," was a tour de force story of one young man, Max J. Fisher (Jason Schwartzman), whose love for the title school is so strong he'll do anything to stay. The film also gave Bill Murray the chance to give one of his best, most complex character performances, ever. In "The Royal Tenenbaums" Anderson, with co scripter Owen Wilson, continues with his oddball view into the lives of his characters, the title family, but with maturity that transcends his previous work.

Royal, as his elder years fall upon him, finds that he wants and needs the security of his family. He concocts a scheme where he declares that he is dying and has just six weeks to live. The news is met with a mix of reactions from Etheline's sorrow to Chas's derision. Royal, who is broke and without a place to live, having been evicted from his longtime residence at the Lindbergh Palace Hotel, tugs enough on the family heartstrings to get invited, by Richie, to come and live with them all. Once ensconced in the Tenenbaum homestead, Royal plays up his dying act (though he'll wolf down three cheeseburgers a day) in an attempt to get back into the good graces of all.

One of Royal's first acts is to introduce himself to his grandchildren, Chas's sons Ari (Grant Rosenmeyer) and Uzi (Jonah Meyerson). Like a true granddad he indulges and spoils the kids and endears himself to them. This pisses Chas off to no end as he has resented his father since the patriarch left the family years before. Chas, during his real estate heydays, even wrested ownership of the Tenenbaum manor away from his own father and his disdain for his dad is palpable. Royal hopes to get to his son through his kids and make peace. Richie, who has never stopped loving his father, is the catalyst that brings Royal back into the household. A tougher nut to crack, for the patriarch, is Margot. As the adopted daughter, she and Royal never got close and Margot never grew past her adolescent isolation stage.

The large ensemble cast is definitely operating in the spirit that Anderson and Owen build up in their screenplay. Gene Hackman, while I wouldn't consider his light role as Oscar-worthy, does give a solid, funny perf as the fallen-from-grace Royal. He is a conniver and uses his charm and patriarchal position to insinuate himself back into the family's good graces, but the web of lies he uses to gain his desired ends works against him - to comic affect. His children have grown up into neurotic adults and the actors portraying them fit the bill well. Ben Stiller is a master of displaying anger, frustration and disdain all at once and hurls this bundle of angst at his father whenever he can. Gwyneth is Margot and portrays the troubled, neurotic adoptee with a marvelous air of boredom. Luke Wilson is a good son but a very strange guy with a propensity for wearing head and wristbands bands constantly. He also harbors deep romantic feelings for Margot.

Angelica Huston, as Etheline, reps the stabilizing force in the Tenenbaum family as the matriarch who kept it all together after Royal was tossed out on his ear. She has developed a deep affection for the family accountant, Henry Sherman (Danny Glover), a successful real estate entrepreneur and widower who wants to marry Etheline. Huston and Glover give dignified perfs in their respective roles. Bill Murray, who was so terrific in "Rushmore," isn't given a heck of a lot to do as Margot's older husband Raleigh St. Clair. Owen Wilson uses his goofy charm to good affect as the kid's childhood friend, neighbor and, now, suitor to Margot, Eli Cash. Kumar Pallana plays marvelously off of Hackman as the family retainer and martini-drinking companion to Royal, Pagoda. Seymour Cassell has a small role as an elevator operator, Dusty, who befriends Royal.

Techs are straightforward but with oodles of funky camera work by Robert D. Yeoman that shows us a different, outsider-affectionate view of New York City. Costuming meets the offbeat story head on and Karen Patch dresses the players with unique, distinctive outfits that fit the characters surprisingly well. The setting of the Tenenbaum home, a real house in the Hamilton Heights neighborhood in Harlem, is a character itself in the film with all the quirky corners and features - like the "game" room, a closet where all the children's board games are stored - makes the Tenenbaum house feel like a home. The format of the telling of the Tenenbaums's story is charmingly handled as each new incident begins as a chapter in a book. Books, themselves, are a prominent feature of the film, including Etheline's "A Family of Geniuses" about her kids and Eli's historical novel that is based on the premise that George Custer didn't die at the Little Bighorn. Music spans from a cover of "Hey, Jude" to the Clash to the theme from "A Charlie Brown Christmas."