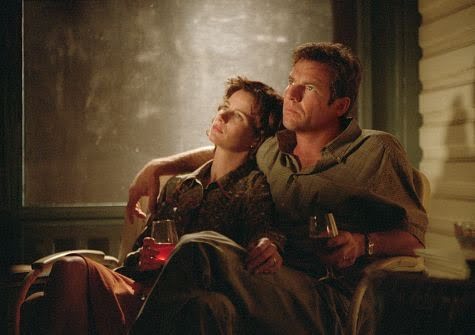 In 1999, Jim Morris, a high school science teacher and baseball coach from a small town in Texas, became the oldest rookie pitcher to make the major leagues after his team dared him to try out. Screenwriting vet John Lee Hancock ("A Perfect World"), working from a script by Mike Rich ("Finding Forrester"), makes his directorial debut with the G-rated Disney film "The Rookie."

If Hancock doesn't quite knock one out of the park, he's made at least a third base hit with this honest and affecting American story. Star Dennis Quaid, in his best role in years, keeps the 'going-for-your-dreams-thang' down to earth.

Film begins showing young Jim (Trevor Morgan, "Jurassic Park III") as an uprooted Navy brat with a love and proclivity for baseball that's not encouraged by his dour dad (Brian Cox, "L.I.E."). An odd framing device about an oil prospector, two nuns and the patron saint of impossible dreams sets the stage in Big Lake, Texas, where the scene segues to narrator Henry Sampson (Royce D. Applegate, "O Brother, Where Art Thou?"), a kind-hearted dry goods proprietor and father substitute. Jumping forward decades, we find Jim (Dennis Quaid) in a sexy/comfortable marriage with school counselor Lorri (Rachel Griffiths, "Blow," in a richly shaded performance) after blowing out his shoulder in the minor leagues years earlier.

Jim's team, the Big Lake Owls (which Texas accents turn to 'Als'), have had exactly 1 win in the past two seasons and can't get grass to grow in their field. One afternoon after practice, catcher Joe (Chad Lindberg, "The Fast and the Furious") persuades Jim to pitch a few to him and is amazed by the coach's fastball. Soon the whole team is onto Jim and batter Wack (Jay Hernandez, "crazy/beautiful") proposes a wager that turns Jim's words back on him - if the Owls win division championship, Jim must not give up on his earlier dreams and apply for a professional tryout.

Screenwriter Rich works his Rockyesque one-two punch by bringing Jim down a few pegs before wrapping on a high note. Jim's tryout is leavened with humor, as he arrives with his young son Hunter (Angus T. Jones, "See Spot Run") and daughters comprised of a toddler and infant. His 98 mph fastball may raise his confidence, but his reception in the minors and guilt over his pursuit's ensuing financial burden brings confusion and self-doubt.

The film is full of lovely moments. When Jim first begins to consider pitching again, he stops his truck on a darkened road to pitch at a speed trap. His pitches are always initiated by a closeup from behind of his hand jiggling the ball in anticipation. News of his major league call-up is shared with a son who focuses on the habits of the devil ray, frustrating his dad's childlike excitement.

Technically the film is first rate with cinematographer John Schwartzman's ("Pearl Harbor") widescreen compositions imaginatively capturing both small town life in and big time ball, all expertly edited by Eric L. Beason ("For the Love of the Game").

"The Rookie" dispenses with the golden myth-making of baseball movies like "The Natural" and "Field of Dreams" with their slo-mo moments and supernatural aspects and is all the better for it. It's a terrific American sports movie and Dennis Quaid is its athletic heart.

Jim Morris (Dennis Quaid) is a high school science teacher who, years ago, had a chance to play big league baseball. But, he blew out his shoulder and had to put his ambitions and dreams behind, settling for a happy, if uneventful, life with his wife, Lorri (Rachel Griffiths), and their three kids in the west Texas town of Big Lake. When the members of the high school baseball team he coaches pose a bet that, if they make the state finals, Jim will try out for the big league, there are surprises all around in "The Rookie."

Attorney turned screenwriter John Lee Hancock makes his directing debut with the feel good film "The Rookie."  This true-life, G-rated sportster covers a lot of ground with its Good News Bears team of ball players who make a deal with their coach, Morris. The Big Lake Owls have never had a winning streak. Hell, they never win, period, but they are willing to put it on the line for Jim when they make a deal - if they make it to the state championship, their coach will try out for a pitching spot in the majors. Jim, knowing that the Owls are perennial losers, agrees to the plan. Little does he know that his boys will be true to their word as they have the best season of their lives and do, indeed, make it to the state championship.

Now, Jim has to put up or shut up and he, with his kids in tow, heads to the tryouts for the Devil Rays farm team. He pitches his best and, just as he prepares to head home, the team scout informs him that he pitched every ball at a remarkable 98mph! He is told that he may just get a call from the club and Jim's life enters a whole new phase. Fortunately, his wife Lorri could not be more supportive of her man and, being a good west Texas wife and mother, she sends him off to fulfill his dream.

There is a bunch of stuff going on in "The Rookie," so much that I have to say the film feels too short at 130 minutes runtime. It's not that I would want the movie to run longer, but there is too much material to cover, properly, in the allotted time. There are really several stories going on here - the rags to riches tale of the Owls, who turn from losers to winners to force their coach to reach for his dreams; Jim's quest to become a big league pitcher years after he though the dream had died; a story about fathers and sons where Jim gives his boy, Hunter (Angus T. Jones), all the love and attention that he didn't get from his Navy dad (Brian Cox); and, finally, the loving supportive relationship between Jim and Lorri, a woman who could almost be deemed a saint for her patience and understanding. Feel good is the bottom line for "The Rookie."

Helmer Hancock does an assured job of marshalling his cast and crew in a no-nonsense way that moves things along briskly. It helps that he has a talented, likable lead in Dennis Quaid as the oldest rookie in the major league. Quaid has the handsome good looks and physical ability to make this true-life adventure eminently watchable and believable. Rachel Griffiths is almost saintly as the supportive wife character that not only stands by her man, she pushes him to realize his dreams. Young Angus T. Jones is a cute little kid and does a pretty darned good job as a boy who idolizes his dad - he is more impressed that his father is playing for a team named after a fish (the Devil Rays) than he is of his dad playing in the big league. Brian Cox, as the stern, career-oriented Navy CPO who missed out on his son's growing up, lends his usual dignity to the role.

John Schwartzman provides crisp lensing that captures the feel of a small, west Texas town. The rest of the techs are first rate, too. The inspirational screenplay by Mike Rich covers a lot of ground, perhaps too much, but ties things together, neatly, by the end.

I never got the feel of the love of the game in "The Rookie" but appreciate the inspirational message it delivers. The G rating will attract the baseball fans of all ages but the story is a bit too mature for younger kids.