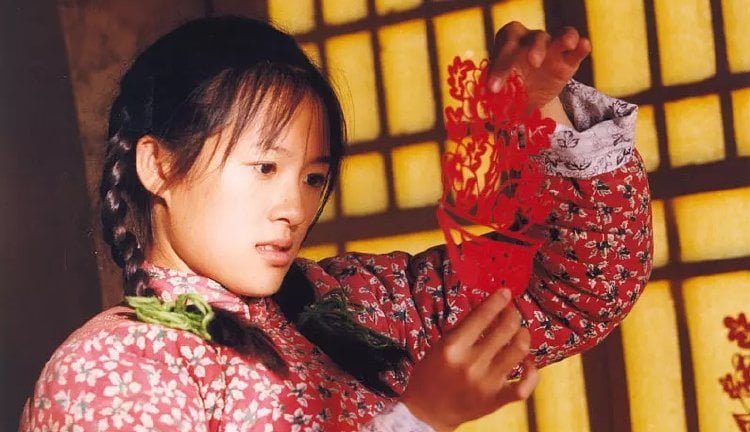 Luo Yusheng (Honglie Sun) is called home from the city by the mayor of his hometown when his father dies.  The mayor (Guifa Chang, present day) has a problem honoring his mother wishes to have her husband's casket carried back to their rural village, as all the able bodied men have moved into the city.  His grief stricken mother makes Yusheng recall her and his father's locally legendary courtship and he becomes determined to enact the old custom designed to keep his deceased father from forgetting "The Road Home."

Director Zhang Yimou ("Ju Dou," "Raise the Red Lantern") ends a trilogy of sorts with "The Road Home," his third based-on-fact tale revolving around a determined young woman after "The Story of Qui Ju" and "Not One Less." While the first two films were shot in a grittier style than his previous work, "The Road Home" is a lush, widescreen film with images recalling his earlier work "Ju Dou."

Zhao Di (Ziyi Zhang, "Crouching Tiger, Hidden Dragon," past) is a non-educated country girl who lives alone with her blind mother (Bin Li). When a new schoolteacher arrives, the entire town turns out to see him and Di is immediately smitten with the young man. Luo Changyu (Hao Zheng) makes eye contact with the pigtailed girl in the bright red jacket.

Di goes out of her way to cross Changyu's path, even travelling to the farther well behind the schoolhouse for her water (a comical scene shows a local foil Changyu's attempt to also get water while Di is at the well). Eventually, it's the Zhaos' turn to host dinner for Changyu and he presents Di with a barrette to match her jacket. A dramatic separation is followed by a harsher one as Changyu is called back to the city (Mao's reversal on his educational program), and then again after he defies city officials and sneaks back to see Di.

This moving tale is adapted from his novel "Remembrance" by Bao San. Very little dialogue is used in the central flashback, where images speak and non-obtrusive narration fills in the story. The themes of everlasting love and home are referred to often in simple, almost offhand ways. Memory keeps love alive with the imagined sound of a loved one's voice.

Zhang Ziyi, who went on to international acclaim after "Crouching Tiger," is luminous as the young Di - after a look from the handsome Changyu, her face brightens even more - this is star wattage. Zhang Yimou, who first discovered Gong Li, has an eye for talented and photogenic actresses.

Present day scenes are filmed in a bluish black and white and set in a snowy winter, while the central flashback is in glorious color. The past is dreamlike perfection, somewhat like "The Wizard of Oz," where home was also the desired end. The film will also recall "Witness" as men build a new school while women prepare their lunch or Majid Majidi's "Children of Heaven," where the beauty of a craftman at work is celebrated. Zhang's current heroine chases after the mayor's vehicle down a dirt road just as his last did in "Not One Less."

Cinematographer Yong Hou ("Not One Less") frames Di in a doorway surrounded by bright orange pumpkins as the son recalls his father saying that sight of his mother was like a portrait. His black and white images are also artful, as when a funeral procession trudges through the snow on foot, backlit by the headlights of the cars snaking behind. Editor Ru Zhai ("Not One Less") dissolves shots of Di both coming and going on her daily trek to find a lost hairpiece. (That barrette makes one wonder if Zhang will be typecast receiving and losing hair ornaments to men!) The one unfortunate note in this symphony of filmmaking is Bao San's score, which borders on plagarizing the theme from "Braveheart."

Yusheng honors his parents at film's end by teaching one class in his father's old school. 'Know the past, know the present' chant the students. "The Road Home" poignantly shows us both through the eyes of a son just coming to understand his father's lesson.

Businessman Luo Yusheng (Sun Honglei) is going home. His father recently died and his mother (Zhao Yuelin) insists that, following tradition, the body be walked home from the hospital morgue many miles away. Luo balks at the idea, but when he sees an old photo from his parents' youth, his reminiscences of their locally historic courtship cause him to change his mind and fulfill his mother's wish to walk with his father, one last time, on "The Road Home."

Chinese filmmaker Zhang Yimou has been responsible for some of the world's most beautifully rendered films since the start of his career. "Red Sorghum," "Ju Dou" and "Raise the Red Lantern" dealt with such issues as sex, political repression and male misogyny in lightly veiled personal statements against the Chinese government's humanitarian policies. His latest films, though, like "Not One Less" and the now-showing "The Road Home," take on a more personal, gentle air.

"The Road Home" begins, in present day China, with Luo Yusheng making the long, cold winter's journey home to Sanhetun, the tiny village of his birth, to attend his father's funeral. The old man was a schoolteacher who came to the town 40 years ago, fell in love and stayed, teaching the children, until his recent death. Now, the man's mother insists that there be a traditional funeral and her husband's body be carried back on the shoulders of the village men. Luo thinks the demand unreasonable and tries to persuade his mother to change her mind. But, as he gazes at an old photograph of mom and dad when the were first married, he recalls the local stories of their unique courtship and it's his mind that changes.

We are taken away from the stark black and white of the modern day story to a lush and colorful time, 40 years before. The pretty, young Zhao Di, the comeliest maiden in the village, learns that a new schoolteacher has been assigned to their tiny hamlet and is pleasantly surprised to find Luo Changyu (Hao Zheng) to be a darned handsome young man. Di unabashedly sets her cap for the young man, against the advice of her elderly, blind grandmother (Bin Li). The subsequent tale is a sweet remembrance of two people falling in love.

Zhang Yimou has always created striking images on the screen, but has, in recent years, taken on simpler stories that deal with the day-to-day mechanics of life and living. Daily incidents like cooking food or repairing a bowl are shown in great detail with a love of image that makes you drink in every moment of such simple tasks. There is also a hint of rebelliousness as the determined Di goes against the tradition of arranged marriage. The pairing of Di and Luo because of love, not arrangement, makes the courtship and subsequent nuptials a local legend, remembered by all, even today.

Zhang Zi-Yi lights up the screen with her smile and, in one scene where Luo first notices her, it is almost blinding. Her dazzling smile and animate features are a plus since there is little dialogue and the story is conveyed primarily with visual images. There is Di's painstaking preparations of meals she hopes Luo will select during the lunch breaks as the men of the village build the new schoolhouse. She spends days and weeks trying to arrange a chance encounter with the teacher, even travelling across the village to get water from the well near the school, but farther from her home. (The well is used for subtle humor in one scene where teacher Luo, noticing Di, tries to rush up and get water for himself. But, a well-intentioned villager insists that the scholar is too important for such menial tasks and struggles to wrest the buckets away from the eager Luo. It's a funny, believable little scene.)

The bookends of the film, the man going home, is a movie unto itself as the wash of emotions and remembrances help to change Luo Yusheng and honor his mother's wish. Once his mind is changed, he seeks the help of the town's mayor (Guifa Chang) to hire men from another village to help carry his father's coffin home. When the day finally comes and the procession makes its way on the long journey, the mayor gives back all the money, explaining that over 100 of the old teacher's students have volunteered to help. The others, who were hired for pay, refuse the money in honor of the deceased.

"The Road Home" is a world-class film that shows influences from other countries. The distinctly western-sounding score by Bao San uses soaring violins and a lone flute that sounds much like the music to "Braveheart." Cinematography, by Yong Hou, is striking, especially his color work used in the flashbacks. Zhang Yimou has always used colors prominently in his films and Yong Hou utilizes them to stunning affect, especially for the exteriors. Costume design, by Huamiao Tong, is terrific, particularly the attention to Zhang Zi-Yi's outfits of bright pink and vivid red. Art direction, by Juiping Cao, is nicely rendered and spans the decades properly as what was once young is now old.

The true story, by Shi Bao from his novel "Remembrance," is a simple, loving tale that wears its sentimentality like a badge of honor. It is homage to our parents and an affirmation of love and loyalty that easily spans cultures. It isn't a Chinese story, but a universal and human one.