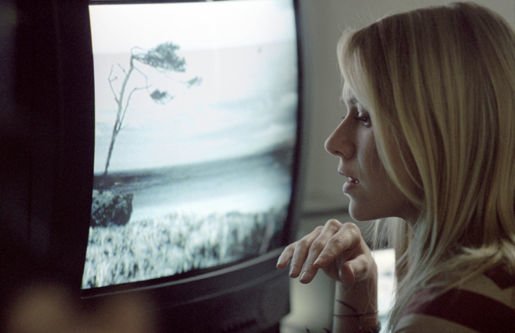 When reporter Rachel Keller (Naomi Watts, "Mulholland Drive") honors her sister's request to discover the cause of her fifteen year old niece Katie's death, she could never imagine the evil she will encounter in director Gore Verbinski's ("The Mexican," "Mouse Hunt") remake of the 1998 Japanese horror classic, "The Ring."

Screenwriter Ehren Kruger ("Arlington Road," "Scream 3") attempts to remove some of the ambiguity of the original "Ringu" and in so doing makes the chilling story laughable. Verbinski, an odd choice to direct this project, gets some jolting visuals, but can't sustain the feeling of dread he achieves through the film's midpoint. Perhaps most disappointing is the pedestrian role Watts has chosen to follow up her breakthrough performance in Lynch's more disturbing film of last year.

The film begins identically to the original. Teenage Katie (Amber Tamblyn, TV's "General Hospital") tells her buddy Becca (Rachael Bella, "A Little Princess") about an overnight trip to a cabin in the woods a week ago. Becca's interested in hearing about sexual activity, but Katie is frightened because of a weird videotape the group watched there, which was followed by a phone call telling them they'd all die in 7 days. The phone rings. The two terrified girls make their way downstairs to answer - false alarm. Becca goes back upstairs and Katie gets a drink. The television comes on. Katie turns it off. It comes on again. Katie turns and screams - flash! Cut to Rachel and her young son Aidan (David Dorfman, "Bounce") dressing for a funeral.

Rachel discovers from Katie's friends that Becca is now in a mental hospital and that all the others who watched the tape have also died. She finds their cabin and the tape. She watches it (as, eerily, do we). She gets the phone call. She enlists the aid of ex-lover, Aidan's dad Noah (Martin Henderson, "Windtalkers"), a media specialist who also watches the tape despite her warning. He doesn't believe the story until he spies himself in a store's security monitor, his face distorted just as the cabin group's were in a photograph Rachel found. Now the two are in a race against time to uncover the tape's origins.

Even in "Ringu," the origins of the tape seem like they're coming from an unrelated story, but Hideo Nakata's film wedded chills with a melancholy feeling of loss. "The Ring" simply gets too literal, then goes overboard into outright ludicrousness.

An added subplot, involving horse breeding, provides for one of the film's more horrifying moments (animal lovers beware), but once that scene passes the film nose dives. Rachel waltzes into a (potentially dangerous) stranger's home and starts going through his belongings. A suicide is so over the top it's ridiculous. The cabin is absurdly and unnecessarily chosen to house the ring.

Verbinski didn't need to steal imagery from any other movie than the one he was remaking, but nonetheless references to films such as "The Sixth Sense" and "Psycho" serve only to distance the audience. He does do a terrific job with that horse scene (beautifully edited by Craig Wood), the tape itself and visualization of all the victims (special effects makeup by Academy Award winner Rick Baker).

Watts has little to do here, although she and Henderson are fine. Dorfman, who looks like he belongs to the Culkin clan, overdoes the dark eyed stare. Brian Cox is inexplicably cast in a small role he should leave off his resume. Daveigh Chase, the voice of Lilo in "Lilo & Stitch," is a great ghoul.

While "The Ring" provides a few jolts, their effect doesn't linger. Find the original Japanese film for some real Halloween creeps.

In 1998 a Japanese horror film named "Ringu," by Hideo Nakata, was released and, because of its originality and genuine spookiness, attained a considerable cult following. It is the story of an urban legend - when you watch a certain surreal videotape of disjointed images, you will receive a phone call and a croaking voice tells you that you have seven days to live. Numbers of young people have died in strange, horrific ways and it's up to one woman, a reporter, to get to the bottom of the mystery. Director Gore Verbinski remakes that very haunting horror flick in his western adaptation called "The Ring."

The original rendering of "The Ring" is a truly frightening horror movie that uses its grainy video images to good stead in developing a gut-twisting unfolding that made me not want to watch it alone, in the dark, late on a stormy, lightning punctuated night. Unfortunately, Verbinski's remake does not have the original's qualities that make a horror film horrific, even though the two films begin identically.

Naomi Watts follows up her starring debut in David Lynch's "Mulholland Drive" in what is a lackluster performance in an equally lackluster film. It's not that Watts is bad as the character of investigative journalist Rachel Keller trying to get to the bottom of the spate of particularly hideous deaths by fright. It seems more likely that the material does not lend itself to the development of characters. For example, when the mother of a victim pleads with Rachel that her background makes her the perfect person to get to the bottom of the mayhem, it takes 15 minutes before we find out she's a newspaper reporter. Watts takes a backseat to the "story" and reps a poor follow up to her starring debut.

In the original, there is a little boy, the son of the heroine, but the kid is kind of vacuous and doesn't lend much to the film. In the remake, young David Dorfman puts some meat into the character of Aidan Keller who is a sort of conduit between two worlds. Veteran thespian Brian Cox plays a character that is supposed to have some significance (character not in the original) but lacks definition. His demise is provided by an overkill (pun intended) of electronics that made me think of a Monty Python skit, not a good image for a horror film.

The story starts off identically to the original, almost scene for scene, but departs from the simple, direct tale and adds "depth" by trying to make the story more complex. The result is a film that lacks the coherence, and the subsequent horror, of the Japanese oeuvre and made me just want to get the thing over with.