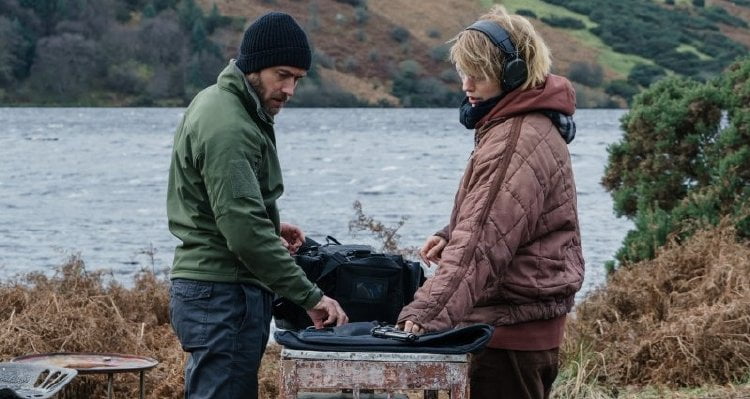 When ‘Lisa’ is called to the front bedroom of a London brothel, her client tells her he only wants to talk. Proctor (Raza Jaffrey) knows the drug addicted prostitute is really former Oxford student Stephanie Patrick (Blake Lively), drowning herself in grief since her entire family was killed in the terrorist bombing of a transatlantic flight. Procter is an independent journalist who tells her he’s determined the identity of the bomb maker. Once she realizes she can trust him, though, Stephanie’s thirst for revenge spooks Reza (Tawfeek Barhom) and gets Procter killed. Following a lead from Procter’s files, Stephanie makes her way to the Scottish Highlands where former M16 agent Ian Boyd (Jude Law) gives her proper training in “The Rhythm Section.”

Director Reed Morano ("Meadowland") gussies up her material with edgy visuals and pop songs,
star Lively disappearing into her role with an English accent, multiple disguises and bruisingly realistic hand-to-hand combat, but there is no mistaking the preposterousness of screenwriter (and book series author) Mark Burnell’s airport novel thrill ride. It’s an entertaining diversion, but the commitment provided the production far outweighs its content.

Stephanie procures a gun from a known pawn broker and easily tracks Reza in the cafeteria of his engineering college, but cannot bring herself to shoot once she’s gained proximity. She returns to Procter’s ransacked apartment, the man lying in a pool of blood. Finding a photograph of a Scottish Loch with geographic coordinates, she sets off (we have no idea what she expects to find here nor any idea if she does). Finding a remote cabin, she’s jumped by the dour Boyd who clearly thinks her absurd. The next thing we know, he’s teaching her how to shoot (‘your heart is the drums, your breathing the bass’), forcing her to swim the length of the loch, forcing her off the road and attacking her over tea. Apparently now she’s ready to take on shadow terrorists and ex-CIA mercenaries and heads to Tangiers using the alias Petra Reuter, a ruthless assassin Boyd got booted from the CIA for killing (grief again, also the subject of Morano's first film, "Meadowland").

Lively is no ‘Atomic Blonde,’ getting beaten and bruised in rough and tumble combat. She meets a man (Sterling K. Brown) who has info leading to ‘U17,’ the terrorist behind the plot which orphaned her, but who trades information for a contract hit on billionaire Leon Giler (Max Casella) in New York City. She also must self-finance, accomplished by traveling to the home of Suleman and Alia Kaif (Nasser Memarzia and Amira Ghazalla), the parents of the man targeted in the attack (her parents, brother and sister, along with hundreds of others, were ‘collateral damage’).

Morano stages a compelling and chaotic chase scene in the streets of Tangiers, one foreshadowed by Boyd’s highland bumper bumping, and a tense rough-and-tumble climactic
showdown with Reza. Lively’s all in, once again proving herself capable of elevating undercooked material. “The Rhythm Section” is the type of movie you know is ludicrous while being eminently watchable.