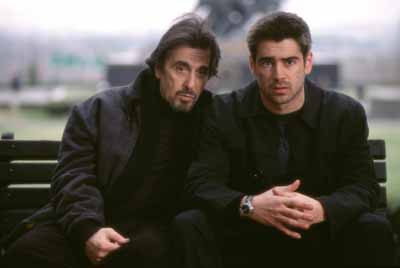 "Nothing is what it seems" and "everything is a test" are the buzz phrases that CIA recruit James Clayton (Colin Farrell) hears, repeatedly, from his trainer, Walter Burke (Al Pacino). The young computer genius is conscripted by the senior spook and brought to the company "Farm" for training in the black arts of espionage but Burke has something different in mind for his protégé in "The Recruit."

James Clayton's (Colin Farrell, "Minority Report") Spartacus software wows visitors to a computer show while a mysterious figure lurks in the background. Walter Burke (Al Pacino) is a CIA recruiter who snares Clayton's interest by hinting that he knew Clayton's father and that he may have been CIA. "Nothing is what it seems" and "Everything's a test" are Burke's watchwords to "The Recruit."

Director Roger Donaldson goes on a "Cocktail" downswing after his "Thirteen Days" success with "The Recruit." The film is built on a script (Roger Towne, "The Natural," Kurt Wimmer, "Equilibrium" and Mitch Glazer "Three of Hearts") that's both obvious and muddled and features a shopworn performance from Al Pacino as yet another duplicitous mentor.

"I am a scary judge of talent," Burke is fond of declaring, but we question that judgement immediately when presented with Colin Farrell as the top of his class at MIT. While Farrell seems to have an aptitude for action, he fails to put over the spark of above average intelligence. Seeing how his character of Clayton is doomed to think below his belt once fellow recruit Layla Moore (Bridget Moynahan, "The Sum of All Fears") enters the picture, this may be a good thing. This film may be the first to feature flirtation by way of CIA ops exercises. The screenwriters then relegate this near genius to accepting a CIA data entry job after flunking out of the Farm to keep the story going. Father and son symbolism, which extends to Pacino and Farrell's facial hair, is lamely handled.

As student is pitted against student and the validity of kidnappings come into question, it becomes increasingly obvious, as it were ever in any doubt, who is pulling the strings. The mastermind's ultimate explanation, however, is a jumble of words that disconnects dots previously linked.

While Al Pacino's weary presence is still welcome, the presumed heat of Farrell continues to elude. He's a good looking kid who expends about two different facial expressions as the student turned spy. Faring far better is Bridget Moynahan, who brings more depth to Layla than she's exhibited in any previous outings. Farrell's "American Outlaws" costar Gabriel Macht, who was actually good in that bad movie, is given nothing to do.

"The Farm," the film's original title, was a better one but filmmakers thought audiences might expect content dealing with crops and tractors. We're in serious trouble if "The Recruit" even approaches accuracy about CIA operations.

The combination of having Al Pacino as the headliner and A-list director Roger Donaldson ("Thirteen Days") at the helm should have made "The Recruit," at least, a quality film. The realistic look into the machinations of the secretive CIA is a fascinating premise for an action flick, but the screenplay-by-committee (Roger Towne, Kurt Wimmer and Mitch Glazer) fails to inject anything resembling energy into the mix.

James Clayton is a troubled young man who has spent over a decade ruminating over the death of his father, Edward, who died in a plane crash in Peru while working for Shell Oil. Or so it seems. James is also the creator of a software package called Spartacus that allows a single PC to totally control many. This attracts the attention of CIA recruiter Burke who entices the graduating senior to experience the exciting life as a Company secret agent. James heads off to spy school and, with his fellow students, is immersed into the dark and mysterious world of espionage.

Clayton is attracted to Layla Moore (Bridget Moynahan), another aspiring spook, but, as he was told early on, nothing is what it seems. When he and Layla are sent out on a training exercise in surveillance they are unexpectedly accosted by several burly men and spirited away. The next thing James knows, he is being tortured and interrogated until he breaks. He is unceremoniously expelled from the Farm but, as we have been told so frequently, nothing is what it seems and everything is a test. Burke tells James that he not fired and is to go undercover and spy on Layla, whom he says is a foreign agent stealing secret information from the company on a project called Ice 9. This is all smoke and mirrors, though, and Burke has his own, hidden agenda.

While Al Pacino is, arguably, one of America's finest actors, he does little more than walk through his portrayal of super-spook Walter Burke. The veteran thesp does a yeoman's job in his performance but there is nothing for him to hang the character upon, especially as he is taken out of the picture fairly early on and doesn't emerge until near the end (for the requisite "twist") and leaves his costars to fend for themselves. The utter mediocrity of the "The Recruit" makes me wonder if good old Al needs the money.

Colin Farrell has not impressed me ever since his debut, in "Tigerland," as a brooding young GI. He has been brooding, since, in such films as "American Outlaws," "Hart's War" and "Minority Report" (though his one-note perf worked in the latter film). He continues this sullen mood in "The Recruit" as the constantly-needs-a-shave brain boy enticed into the fold of the CIA for reasons that are never really defined, except ambiguously. He is a handsome young guy in a Brad Pitt way, but looks alone do not make an actor and his limited range does not endear his character, James, to the viewer. Bridget Moynahan, as Layla, is given little to do to play off of her student spy partner but this is not the actress's fault. Other supporting roles are background only and a waste of Gabriel Macht (the best thing in "American Outlaws," making me wonder if he should have been caste as James).

The behind the camera techs are, as expected, superior with Stuart Dryburgh's lensing and Andrew McAlpine's production design capturing the look and feel of the world of the Central Intelligence Agency at Langley, VA, and the Farm. The Company, for the first time, has allowed the filmmakers into its inner sanctum and the look feels real. Too bad the effort is wasted on the mediocre and obvious screenplay, the fatal flaw. There is no imagination in the script and, to me, virtually ever plot line is telegraphed or, in the case of Burke's cynicism, alluded to. There are no surprises in store for you in "The Recruit." Even Al Pacino cannot save it from its mediocrity.