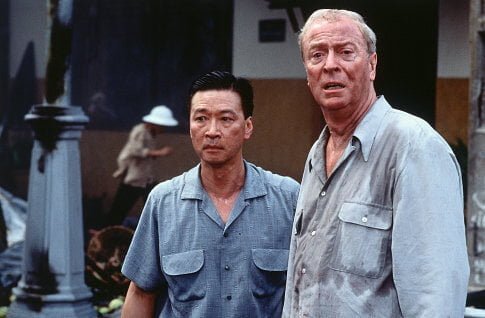 'I should have realized saving a woman and saving a country would be the same thing to a man like Pyle,' reflects British journalist Thomas Fowler (Michael Caine) as he regards his former friend's body laid out in a Saigon morgue. That woman is Phuong (Do Hai Yen, "The Vertical Ray of the Sun"), an exotic young beauty formerly of high station who became a taxi dancer to support herself and older sister Miss Hei (Pham Thi Mai Hoa) before becoming Fowler's mistress. Fowler is jolted out of complacency when he realizes that she, and Vietnam, may be lost to "The Quiet American."

This second adaptation of Graham Greene's novel (screenplay by Christopher Hampton and Robert Schenkkan) is a powerfully simple telling of complex emotions and politics in a 1952 that finds Vietnam reflected in a woman. Philip Noyce's ("Rabbit-Proof Fence") sure-footed direction, Christopher Doyle's gorgeous widescreen lensing and a career-topping performance from Michael Caine make "The Quiet American" one of 2002's best films.

Fowler is surprised to like Alden Pyle (Brendan Fraser, "Gods and Monsters") when the younger American introduces himself as an aid worker, but begins to become concerned later that evening as he observes Pyle dancing with, and obviously falling for, Phuong. The opportunistic Miss Hei sees Pyle as a better match for her beautiful sister. Alarmed, Fowler takes action by traveling to the dangerous Phat Diem area, where a massacre has taken place, in order to keep his Vietnam correspondent post and is surprised to find Pyle has followed him, ostensibly to do the honorable thing and proclaim his intentions towards Phuong. Fowler then writes to his wife in London asking for a divorce and tells Phuong she will grant him one.

Fowler gains access to General The (Quang Hai) who has begun a third political movement, only to discover Pyle and his boss Joe Tunney (Robert Stanton, "Happy Accidents") on the scene again. Pyle hitches a ride back to Saigon with Fowler and saves his life when they're ambushed by communists, but turns on him when they return and his lie about impending divorce is revealed. Without Phuong, Fowler witnesses a car bombing in Saigon which kills many innocent civilians. Sickened, he also spies his quiet American in the midst of the scene speaking Vietnamese like a native. When his assistant Hinh (Tzi Ma, "Rush Hour") admits to being a communist, Fowler's conscience forces him to take sides - or does it?

Miramax chief Harvey Weinstein shied away from releasing this film, which presents Americans as terrorists, post September 11, but there may be no better time to open peoples' eyes to the type of activities the U.S. has engaged in (see also "The Trials of Henry Kissinger"). Schenkkan and Hampton's terrific adaptation clearly defines the story on two levels - that of a love triangle and that of a third world country being pulled in three directions as colonialism (Fowler) is being overcome by native communism which in turn is being threatened by imperialism (Pyle).

Caine's performance builds power as the film progresses and his character's eyes are opened. He is a tainted hero, whose personal desires can never be separated from his moral standing. Caine narrates the film with a world-weary melancholy, his opening monologue like that of "Sunset Boulevard" as told by a second party. When later he reflects 'What surprised me was how happy I was to see him,' Caine makes Fowler's astonishment real. The subtlety in which he plays his betrayal is one of the finest single scenes in any film this year. Brendan Fraser once again proves, as in "Gods and Monsters," that he can support a great actor in drama. Fraser draws Pyle as the opposite of Fowler, all earnest self-righteousness, rationalization and seeming naivety. When Pyle's true identity is revealed, Fraser makes the audience feel as betrayed as Fowler, so clear-eyed has he been. Caine and Fraser make you believe that these two men are both friends and enemies in a classic cinema pairing.

Do Thi Hai Yen is quietly beautiful, but Phuong is mostly a symbol. Still, the actress, who spoke no English before getting the part, makes credible affection for one man and something stronger for another. Pham Thi Mai Hoa represents pure connivance as her sister. Tzi Ma has quiet presence as Hinh, who observes Fowler daily until he can make use of the man.

Technically, the film is simply elegant. Production designer Roger Ford recreates the period and place on location where Noyce's camera captures the beauty of Vietnam with many scenes playing out in darkness. Editor John Scott has given the film a languorous tempo, while still creating strong suspense in the ambush and bombing scenes. Craig Armstrong's ("The Bone Collector") score adds to the ambience without calling attention to itself.

"The Quiet American" should be required viewing on several levels. It is a great achievement for both its director and star.