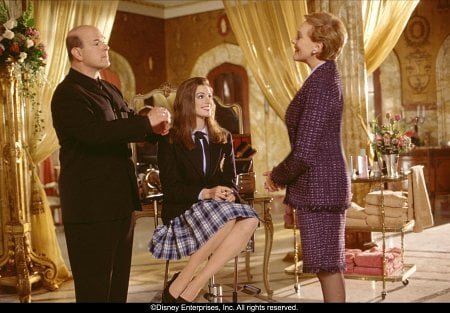 15-year old Mia Thermopolis (Anne Hathaway, TV's "Get Real") is 'invisible.' Her hair is a frizzy nightmare, she's lousy at sports, public speaking makes her physically ill and her own Vice Principal (Sandra Oh, "Last Night") greats her as 'Lilly's friend.' When the mother of the father she never met arrives in San Francisco and invites her to tea, Mia reluctantly attends and learns she'll be invisible no longer - her father was the crown prince of Genovia, her grandmother is its Queen and she's about to write "The Princess Diaries."

Adapted from Meg Cabot's novel by Gina Wendkos ("Coyote Ugly"), "The Princess Diaries" blends bits of "My Fair Lady," "Anastasia," and "Pocketful of Miracles" for its tale of a commoner whose royal grandmother grooms her for a global stage. Remove the glasses, straighten the hair and voila! - we have a beautiful princess.

Mia pines for the popular guy at school (Eric on Detten, "Leave It To Beaver") who's dating cheerleader Lana (singer Mandy Moore), the girl who loves to put down Mia. Meanwhile, Mia's best friend Lilly's (Heather Matarazzo, "Welcome to the Dollhouse") older brother Michael (Robert Schwartzman, brother of Jason) likes her for who she is and is obviously the better choice. Once Mia's lineage is leaked, she forgets plans with Michael and a promise to appear on Lilly's cable show in order to accompany the suddenly interested Josh to a school beach party. Compromising photos appear in the paper, causing conflict with Queen Clarisse (Julie Andrews) as well. Will Mia ascend to the throne of Genovia? The resolution of this cliched package is never in doubt.

While "The Princess Diaries'" main story may only entertain preteen girls, it does have a couple of things going for it. Director Garry Marshall ("Runaway Bride") shows the oft-filmed city of San Francisco in refreshingly new ways, using locations like the Musee Mecanique at Cliff House and an abandoned SOMA firehouse. The best thing in "The Princess Diaries" is Hector Elizondo, star of every film Garry Marshall has made, as the chief of Genovian security who has a "Mrs. Brown"-like relationship with his Queen. The second best thing is Fat Louie, Mia's totally real pet cat.

Anne Hathaway gives a game try in her feature film debut as Mia, but she tries so hard her performance verges on mugging for the camera. If Marshall had reined her in a bit, the film may have had more charm. Heather Matarazzo is a lot more successful as Lilly, Mia's equally outcast buddy who's both pleased and horrified to discover her friend is a royal. Robert Schwartzman displays some of the geeky sexiness that made his older bro Jason such a natural in "Rushmore." Mandy Moore and von Detten are appropriately pretty and hissable as the popular kids, but the usually reliable Sandra Oh is embarrassingly bad as their school's Vice Principal. Julie Andrews glides through the film like the grand dame she is and has wonderful chemistry with Elizondo.

In the end, though, "The Princess Diaries" just gives a high gloss sheen to a perfectly average piece of Disney live action entertainment.