The Princess and the Warrior 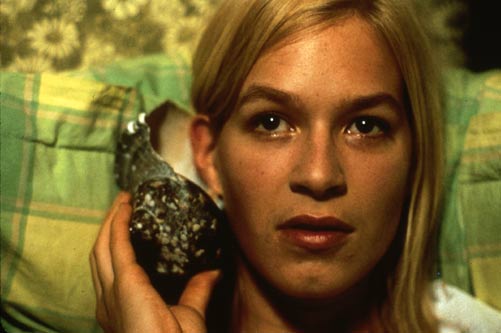 Sissi (Franka Potente, "Run Lola Run") is a quiet psychiatric nurse beloved by the long-term patients in her care but lonely in her personal life. Bodo (Benno Furmann) is a troubled man living with his brother Walter (Joachim Krol, "Run Lola Run"). When Bodo's chased through the streets for thievery, he dances through traffic, startling drivers. Sissi, in town with her blind charge Otto (Melchior Beslon), is hit full force by a truck. Bodo saves her with an emergency tracheotomy and disappears, but fate has dealt these two a hand which must be played in writer/director Thomas Tykwer's "The Princess and the Warrior."

Mix together "Run Lola Run" with "One Flew Over the Cuckoo's Nest" and pull the result out slowly light salt water taffy and you've got "The Princess and the Warrior." Once again, Tykwer examines fate from the height of his extreme overhead shots and his own self-importance. "Run Lola Run" was a fun piece of pop filmmaking, but while "The Princess and the Warrior" contains some beautiful imagery, in the end it covers no new ground.

Once again Tykwer's star Potente holds the screen, but this time she's a blank slate, a sleepwalker who doesn't come to life until she almost dies. She becomes obsessed with Bodo and tracks him down by taking Otto back to the scene of the accident. In a ridiculous scene, Otto (this film's Billy Bibbit) remembers a sound which identifies which direction Bodo came from - two months later. (This type of contrivance makes Tykwer's plot rigging painfully obvious.)

Bodo has been established as an extremely sensitive type (he cries at the funeral of a stranger and loses his job as a gravedigger), but when Sissi finds him in the chalet/shack he lives in with brother Walter, he wants nothing to do with her. Bodo is tortured by the accidental death of his wife and Walter is planning a bank heist so the two can go to Australia to get away from past memories. Sissi, however, persists, returning on a rainy night in a bright yellow slicker that beams an alternative to the kangaroo crossing sign hanging on the brothers' wall. She's still turned away, but it's clear that Tykwer is moving his game pieces for a confrontation midst robbery, where Sissi will be provided a chance to save Bodo.

Tykwer and his Director of Photography Frank Griebe favor shots used in "Run Lola Run" - Potente lying prone with her hair fanned about her, overhead shots which render towns in miniature where so many ants scurry about, dolly shots as characters are propelled down streets and hallways. Tykwer offers up objects as talismans - a seashell, a locket, a button, - to create a mythology around his fantastically titled story. Editor Mathilde Bonnefoy has slowed down the rhythm ("Lola" was an economical 80 min. while "Princess" runs a bloated 135), but the effect often goes over the line from dreamy to sonambulatory. Tykwer's minimalistic score is effective.

Once Bodo (a much stronger costar for Potente than Lola's Manni) enters Sissi's world, the "Cuckoo's Nest" comparisons come more fast and furiously. Sissi's back story is finally filled in before the overtly romantic climax, but once again Tykwer goes overboard - there are just too many accidents (hair dryers in bathtubs, gas station explosions) propelling his central character towards a choice that only happens in movies.

Writer/director Tom Tykwer made quite a splash, internationally, with his surprisingly popular, hyper-kinetic film, "Run Lola Run." Now, he changes gears, but keeps his star, Franka Potente, in the modern fairytale, "The Princess and the Warrior."

Can a filmmaker who made his mark on world cinema with a fast-paced 81-minute action flick - the same story told, with a twist, three times - pull off a two-plus hour movie that bridges romance, bank robbery and a visit to an insane asylum? The answer is: sort of.

Sissi (Potente) is a psychiatric nurse who lives and works in a private hospital. When an old friend asks her to collect an inheritance at a local bank, as a favor, she takes a blind patient in tow and heads into the city, away from the safety of the asylum. Meanwhile, a drifter, Bodo Riemer (Benno Furmann), is being chased by supermarket security guards for shoplifting and hitches a ride on the back of a trailer truck. The driver, distracted by the unwanted hitcher, reacts too late as Sissi walks into his path and is run down.

Not knowing what damage he has caused, Bodo seeks refuge from his pursuers under the truck and, in a burst of heroics, saves Sissi's life with an impromptu tracheotomy. He stays with the injured nurse until medical help can be summoned, then disappears without a trace. Months later, the nearly recovered Sissi begins a search for "the man" who saved her life. When she finally finds him, the sad and angry Bodo wants nothing to do with her. They have another chance encounter when Sissi arrives at the bank to collect her friend's inheritance just when Bodo and his brother Walter (Joachim Krol) are robbing it. Walter gets shot and has to be left behind, but Sissi helps Bodo escape and brings him to her hospital to hide. As she gets to know him, she comes to believe their meeting was not just chance, but destiny.

I have to give Tykwer credit in his single-minded vision of this modern fairytale. It is ambitious in its scope and tries to cover a lot of ground. It's kind of like "Beauty and the Beast" meets "One Flew Over the Cuckoo's Nest" with the shy princess searching for her savior, a reluctant hero who has his own share of deep-seated psychological problems. When Sissi gives Bodo asylum in the asylum, she begins a journey of self-discovery that draws her closer to the troubled former soldier. She also learns the truth about his past - a gas station explosion killed his girlfriend and Bodo has never been able to cope with the death.

Throw into this mixture the botched bank robbery and the unexpected death of Bodo's brother and Tykwer takes us on a low-key roller coaster ride that tries hard to cover all of its bases, but, in the end, fragments in too many directions. The extended "Cuckoo's Nest" sequence has characters straight out of Ken Kesey's story. I half expected R.P. McMurphy to show his face and demand to watch the World Series.

The characters are, in Sissi's case, shy and quiet, and Bodo's, sullen and quiet, making this a pretty quiet movie, overall, especially when compared to the raucous "Run Lola Run." Tykwer, with Johnny Kilmek and Reinhold Heil, provide the music score (derivative of the likes of Bernard Herrmann) that keeps tensions building, helping the too-long runtime feel just a bit shorter. The tech aspects of the film are pretty nifty.

Tykwer tries to do too much with "The Princess and the Warrior." Part fairytale, part romance, part self-awakening, part bank heist, there are just too many parts. It's ambitious and obvious that the writer/director sees greatness in himself, but he ain't no Krzysztof Kieslowski, at least not yet.