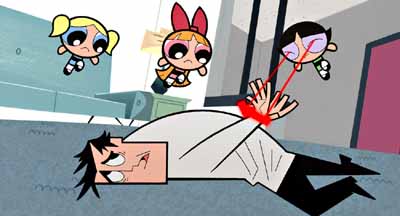 Craig McCracken, the man behind the Cartoon Network's "Powerpuff Girls" and "Dexter's Laboratory," makes his feature directorial debut with the story of the inception of his hugely popular Powerpuff Girls.

When Professor Utonium (Tom Kane) mixes up his batch of little girl ingredients, his lab chimp accidently breaks a beaker of Chemical X into the melange. The Professor becomes a proud poppa of three bug-eyed babes, whom he dubs Blossom (because she's open), Bubble (because she's bubbly cute) and Buttercup (because it also starts with a B). The pink attired redhead, blue dressed blonde and green garbed brunette quickly show they're not like other kids with a display of super powers that include laser beam eyes, untold strength and speed of light flight.

The professor worries about how they'll fit in at kindergarten, but all goes well until he arrives to pick them up. An innocent school yard game of tag escalates among the trio until they literally destroy the city of Townsville. Meanwhile, that mischievous chimp has dosed himself with Chemical X and mutated into Mojo Jojo (Roger L. Jackson), an evil villain who tricks the now lost and outcast girls into helping him build a Help-the_Town-and-Make-it-a-Better-Place machine. In actuality, he's plotted to create a planet of the apes of which he will be king and it's up to the teensy trio to save the day.

"The Powerpuff Girls Movie" is hip, outrageous, funny, punny, but also extremely violent and a shade overlong at 84 minutes. Brightly colored geometric retro animation resembles Fractured Fairytales through the eyes of John Kricfalusi (the "Dexter's Laboratory" short, "Chicken Scratch," which precedes the feature, owes a particular debt to the "Ren and Stimpy" creator). The professor is all straight lines and right angles to his girls' rounded circles. Slightly warped cars feature 1950's fins. The singularly unanimated Townsville mayor looks like he jumped off a Monopoly board while his secretary has legs has legs that repeat the hourglass shape of her figure, scissoring in walking profile.

The girls dart about trailing their signature colors like rainbows. Their destruction of Townsville is particularly impressive, recalling a nuclear storm as vehicles get sucked down streets in their wake. An image of a hole right through a hig hrise is unsettlingly close to reality, although it may only be jarring to adults. Scenes of apes terrorizing the denizens of Townsville are
darkly disturbing to any age group, though. Still images are edited for an effect like a pneumatic drill, bolstered by the film's driving, highly effective score.

The clever writing of Charlie Bean, Lauren Faust, Craig McCracken, Paul Rudish and Don Shank features in jokes, film references and every monkey joke imaginable. Chimps enclose the city intertwined like a Barrel of Monkeys while a large schnozzed specimen doles out banana peels with a Jimmy Durante 'Chachachacha.' The girls' distinct personalities are established at their birth and reemphasized as they float through space, misunderstood by Earth, with Blossom (Catherine Cavadini) hopeful, Bubbles (Tara Strong) distraught at being unliked and Buttercup (E.G. Daily) angry. Buttercup's anger is played for laughs later when she saves a dog (that looks like Poindexter's Sherman) that won't stay saved.

"The Powerpuff Girls" rule, although this is one toon that may be too sophisticated for an audience the age of its feminist heroines.