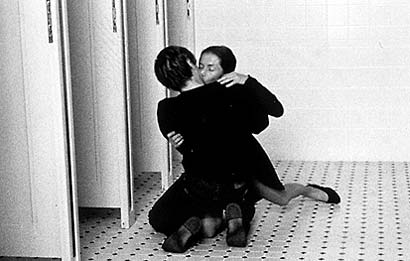 The work of director Michael Haneke ("Funny Games," "Code Unknown"), who also adapted the screenplay from Elfriede Jelinek's novel, is an acquired taste. His ruminations on the individual's response to societal mores, violence in particular, can take a decidedly unpleasant turn, never more so than in "The Piano Teacher," a difficult film to watch.

During the day, Erika is the type of stern taskmaster who rarely accentuates the positive to her students. However, a mention to her mother that a student, Anna Schober (Anna Sigalevitch), is good in her Erika's speciality, Schubert, is met with pettiness. Mother would rather have daughter promote herself into a concert career. When Klemmer shows interest in Erika, she dismisses him until he shows compassion for Anna. Erika does an unthinkable act to remove the girl before throwing herself at Walter - but on her own terms, which initially repulse him. He's told to pay no attention to mother as he's dangled before her.

Huppert strips herself bare to play the buttoned up professor with twisted desires. She snaps on her leather driving gloves like surgical rubber ones, all steely resolve. A passerby who bumps her on the street never knows the utter rage and hatred projected for a few seconds at his back. Interest is expressed by the tiniest quiver of the lower lip while happiness is shown by a smile never quite realized. As lit by cinematographer Christian Berger, Huppert can appear old and haggard, beautiful and ageless, or even, on one scene, corpselike.

The veteran French actress is matched by her senior in Girardot, a parental care nightmare. Tippling down sweet white wine in a small glass which gets frequent refills, Girardot is a helpless predator lying in wait. In public settings, she is a stage mother, fussing over her daughter's perceived needs, but in private she's a critical nag. A chink of compassion is allowed only after her daughter's bizarrely incestuous behavior suggests the madness which killed the family patriarch.

Blond Benoit is refreshingly open in his pursuit of the older woman, believable as a young man who continues to pursue what he seemingly cannot have. When Erika presents him with her pent-up fantasies, his incredulous reaction is naturally played. Haneke and his actor are unable to make Walter's transition to Erika's enabler totally convincing however, the difference in behavior too extreme no matter how initially strong the attraction.

A viewing of "The Piano Teacher" is likely to provoke conversation, but the film's worth is questionable. To lay Erika's problems on her abusive mother is too facile. There are, however, suggestions throughout the film that Erika has subjugated herself, or her 'normalcy,' for love of music. When her student Anna's mother (Susanne Lothar, "Funny Games") cries for all their sacrifices made meaningless, Erika replies that it was Anna who made them. She corrects a student by noting that one does not merely go from loud to soft, but from a scream to a whisper - a level of intensity achieved by the 'madness' of Schubert and Schumann. But how does all this relate to her sexual desires? Erika remarks that Schubert was ugly, unlike Walter who is handsome, and draws conclusions that Walter is not serious about music. Has Erika, therefore, tried to make herself ugly to be worthy of Schubert? And when that ugliness is acknowledged in a sexual way, why does she finally reject her art for love?

"The Piano Teacher" may be the ultimate depiction of suffering for one's art, but it's a brutal viewing experience.

Erika Kohut (Isabelle Huppert) is a piano teacher who refuses to allow any of her students to surpass her artistic skill. She also has perverse sexual appetites and tries to indoctrinate a brilliant new student to help explore her desires. And, she lives with her domineering, possibly insane mother, which may be why Erika, herself, seems pretty crazy in director/writer Michael Haneke's "The Piano Teacher (La Pianiste)."

This is one strange movie. Usually, I try to keep an open mind on a film and wait until it ends to decide how I feel about it. Not so with "The Piano Teacher." Not long into the film I began to feel a soiled sordidness about the events taking place on the screen. Erika is an emotionless, automaton of a woman (with an evil streak) who trains her students well, that is, until they show more promise than she. Erika will do her best to sabotage their talents, even to the point of harm. So, we establish the teacher as a sick and selfish person. Then, we meet mom.

At first, Erika's interaction with her mother (Annie Girardot) points to the matriarch as the root of the younger woman's obsession, But, as thing unfold, it becomes clear that mom may not be so bad after all and Erika is marching to her own perverse drummer. When she meets the very talented and much younger Walter Klemmer (Benoit Magimel), she seduces him with sudden, carnal sex. From the very start of their torrid, confusing affair Erika gives the young pianist mixed signals. She wants sex under her terms and gives Walter a list of her sick-minded desires. He is repulsed. From here we see a spiral as Kohut waffles between demanding dominatrix and weak submissive. The highs and lows of her persona had me so confused I couldn't figure out what the heck is going on.

I would be tempted to call this a character study and dismiss the choppy, uneven story (by Haneke from the novel by Elfriede Jelinek) as quirky. But, the emotionless nature of Erika, as played by Huppert, kept me at arm's length and I never cared a naught for the woman. I actually feel bad for Walter as he is torn by Erika's on-again-off-again lust. She threatens, cajoles, begs and dismisses the young man so frequently and disjointedly that he couldn't figure which end is up, either. By the finale, I had my doubts about mom's supposed craziness, too, as the elder Kohut eventually comes across as the one who has suffered all these years at the hands of her not-so-sane daughter.

This would be a tough film to take if it had been pared down to a reasonable 90, or so, minutes. As it is, "The Piano Teacher" runs for two plus hours and they are grueling. Sickens abounds with Erika mutilating herself, attacking a budding student and performing sordid acts with Walter. The sex, though not graphically shown, is always sterile, passionless and sometimes violent. The ending of the film threw me for a loop and left me scratching my head as to what the heck I had just seen.

Maybe a more creative mind than mine could have made sense out of "The Piano Teacher," but that doesn't make me like the film any better.