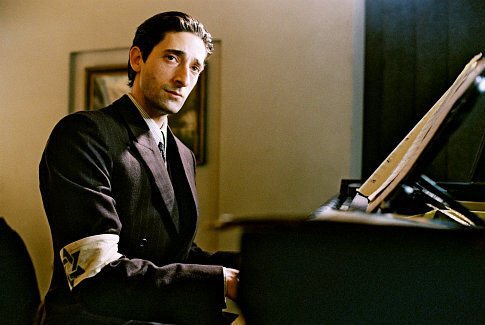 The Szpilman family rejoices to hear that Great Britain and France have joined the war and Poland is no longer alone, but soon thereafter they've been moved to a 'new' apartment and watch in horror as the wall which will define the Warsaw Ghetto is erected outside their window. Only one of them, Wladyslaw (Adrien Brody, "Summer of Sam"), will survive in Roman Polanski's 2002 Palme d'Or winner, "The Pianist."

Polanski is quick to establish Wladyslaw's determination not to be silenced by his continuing to play Chopin as the recording studio he inhabits is destroyed by German bombs. Brody quietly and confidently inhabits Szpilman in one of the best and most rigorously sacrificial (Brody both learned to play the piano and lost 30 pounds for the role) performances of the year. Polanski, bringing his own Holocaust survival memories to the table, has made his best film since 1974's "Chinatown."

As adapted from Szpilman's book by Ronald Harwood ("Cry the Beloved Country"), "The Pianist" is divided into three sections. In the first the Szpilman family is established - loving, genteel parents (Frank Finlay, "Dreaming of Joseph Lees" and Maureen Lipman, "Solomon and Gaenor"), rash older brother Henryk (Ed Stoppard, "The Little Vampire"), sensible sister Regina (Julia Raynor, "Topsy-Turvy") and charming younger sister Halina (Jessica Kate Meyer). The closeness of the family is underlined when Henryk and Halina, who had been weeded out of the passengers being sent to Treblinka, choose to rejoin the family instead. The film's understated ability to wrench the heart is effected when Wladyslaw simply tells Halina that he wished he knew her better. The horrors, like a woman wailing on the platform because she suffocated her baby attempting to keep it quiet in their hiding place, are more effective for Polanski's shooting them on a fabulously bright, sunny day.

This act is closed when Wladyslaw is saved by former friend Itzak Heller (Roy Smiles), now a Nazi collaborator working as an auxiliary policeman. Polanski just moves on - the other members of the Szpilman family are never referred to again and their erasure is all the more poignant for it. Szpilman's luck works again when an old colleague and her husband hide him in an apartment from which he can view the Ghetto uprising, but a profiteering pal leaves him for weeks at a time with no food. A noisy accident uncovers his presence to nosy neighbors and Szpilman is forced to evacuate. He's hidden again, but eventually the starving man joins the living dead who wander the shell of a bombed out city in a bleak winter landscape. Nested in the attic of an abandoned manse, Szpilman is discovered by a German officer (Thomas Kretschmann, "U-751," providing able support), who feeds and clothes him in appreciation of his musical talent.

"The Pianist" will constantly be compared to "Schindler's List," but where that film accentuated its horrors, this one instills them more deeply by presenting their everydayness. A family of six share one caramel before being scattered to the winds. A woman crumples in the street, shot. An old man curries favor by playing the fool and the Germans so enjoy his mugging and scraping they force an entire group of Jews to dance in the street.

Technically, the film has a bright crystalline quality beginning with Pawel Edelman's stunning deep focus photography. His work is so crisply detailed that during Szpilman's impromptu concert for Captain Hosenfeld he captures light shining through the cartilage of Brody's nose, emphasizing the man's etherealness. Sound (Jean-Marie Blondel) is also notable as Szpilman catches conversations next door, or walks through a hole in a wall, his ears muffled and ringing from the blast. Visual effects include terrific matte work to convey Warsaw's devastation.

"The Pianist" is a powerful achievement, an epic tale of a musical survivor that's strength lies in its hushed tone.

Wladyslaw Szpilman (Adrien Brody) plays his piano, for what will be the last time, over the radio airwaves of Warsaw as German artillery bombards the city in the opening moments of World War Two. This begins a tale of survival of one man, a brilliant composer, pianist and a Jew, as the Nazi juggernaut of death spreads across the land in the biographical story, "The Pianist."

Director Roman Polanski brings the personal story of the title character, based on Szpilman's memoirs scripted by Ronald Harwood, to the screen in an epic form that spans years and embraces the essence of the horror of the Holocaust. Things start with a bang as exploding German shells end Szpilman's last performance as a free Jew in Poland. The Szpilman family is in turmoil over what to do - they fear the invading Nazis and want to flee the country but are elated and, naively, secure when Great Britain and France declare war on Germany.

Polanski uses Szpilman's tale to exploit the backdrop of the Nazi treatment of the Jews and other "undesirables" under their control. Adrian Brody, as Wladyslaw, is a surrogate of sorts for the director's own story of survival under Nazi rule. Szpilman suffers the loss of his freedom and is soon denied even the privilege to ply his trade as a pianist. He, along with other Polish Jews, are herded into the infamous Warsaw Ghetto and walled in by their fascist oppressors. This central holding tank in the heart of the city is packed to overflowing as more and more Jews from different parts of Poland and Europe are sent to the ghetto until their Nazi overlords decide what to do with them.

Then, Hitler and his Nazi henchmen order the Final Solution and the ghetto is emptied of its occupants, including the Szpilman family, to be shipped to the death camps. Only a sudden twist of fate and the help of another Jew allow the pianist to escape the fate of his family. Wladyslaw lives hand to mouth and in hiding until a German Army captain eventually discovers him. Luckily, for Szpilman, Captain Wilm Hosenfeld (Thomas Kretschmann) is a music lover extraordinaire and becomes the artist's protector.

"The Pianist" is a film that puts the life of its main character under a microscope during a time of great world adversity. We watch as the talented, intelligent and well-educated Wladyslaw faces a world gone mad. The life and family he knew and loved is gone forever and we are told his story of survival. But, this tale alone would not make this an epic film and "The Pianist" is an epic. Polanski uses Szpilman's story as a springboard to make his statement about the Nazis and the holocaust they unleashed on Europe and the world. The production, on all levels, keeps the overall focus of the film on the atrocities committed in the ghetto but really makes the viewer see the big picture of the Holocaust.

Adrien Brody does a good job in creating the finely honed character of Wladyslaw Szpilman. He is the favored son in an affluent family and his promising future is crushed in an instant when Germany invades Poland. Szpilman is ill suited for the rigors of survival but his talent comes to his aid at various, crucial times. Brody gives elegance to his performance and does a convincing job in playing the piano like maestro. He is a bit of a blank cipher but this is his character's personality and Wladyslaw is the kind of man who would react to events rather than act. The kindness of strangers and an incredible musical talent help him survive the cruel new world.

The production values behind the camera are, in a word, exemplary. Pawel Edelman's camera work is energetic and gives visual life to Polanski's recreation of the Nazi atrocity. Costume, by Anna Sheppard, is exemplary. The subtle elegance of the Szpilmans early on before things went completely bad contrasts with the abject destitution of ghetto life. Art direction by Alan Starski is top of the list for award consideration as it captures the look and feel of Warsaw and the infamous ghetto. Music is a remarkable collection of classics by Chopin, Beethoven, Bach and others performed by the Warsaw Philharmonic National Orchestra of Poland.

It is a great pleasure to watch a film and know that it is one of the best of the year. "The Pianist" is just such a film.