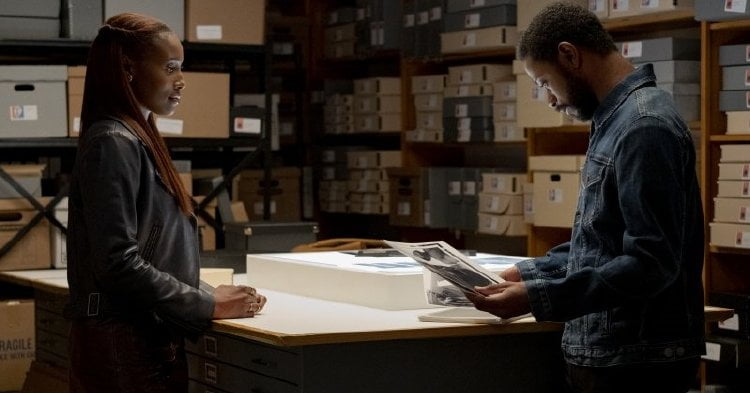 Journalist Mike Block (LaKeith Stanfield) is sent on assignment to cover a story on fishermen in the Louisiana Gulf. During one interview, he notices, from long ago, a photograph of Christina Eames (Chante Adams). With just this old picture of her in hand, he follows his leads and contacts her estranged daughter, Mae (Issa Rae). Mike immediately falls for the beautiful and talented young woman in “The Photograph.”

When The Republic's Michael Block (LaKeith Stanfield) interviews New Orleans fisherman Isaac Jefferson (Rob Morgan, "Just Mercy") for a profile piece, he’s struck by a black and white photo of a woman. She was clearly someone important in Isaac’s life but he tells Mike she moved to New York and he lost touch with her long ago. In New York, Mae Morton (Issa Rae) receives two letters – one for her and one for her father – from her recently deceased, estranged mother, along with “The Photograph.”

Writer/director Stella Meghie ("Everything, Everything") crafts a unique love story across two cities and two generations where two distinct mother/daughter tales affect the outcome of each. The film is quiet and pensive with an undertow of melancholic regret and a light topping of comic relief all set to Robert Glasper’s ("Miles Ahead") elegant jazz score. Issa Rae and Lakeith Stanfield create a tentative romance, its unspoken emotions simmering into a full boil.

The film begins with a grainy 1989 video of Christina Eames (Chanté Adams) talking about her photography. We will learn that this is part of the retrospective Mae is putting together of her mother’s work as the assistant curator of the Queens Museum. It also establishes the end of Meghie’s flashback timeline.

Our two lovers meet when Mike reaches out to Mae to learn more about Christina for his piece on Isaac. Commitment phobic Mike has just broken up with a long time girlfriend in New Orleans and is contemplating taking an Associated Press job in London, but an attraction is clear to see. He leaves fate with Christina, but when she fails to call, he shows up at one of her events with office intern Andy (Kelvin Harrison Jr., "Waves") as his wingman. Mae is happy to see him and her friend Rachel (Jasmine Cephas Jones) quickly clears Andy out of the way.

Meghie shuttles back and forth in time, 1984 Louisiana introducing us to aspiring photographer Christina and Isaac (Y'lan Noel, HBO's 'Insecure'), the man who wants to marry her. Her mother (Marsha Stephanie Blake, “Luce”) is wary and when Christina tells her she’s going to New Orleans overnight with friends Peter (Maxwell Whittington-Cooper) and Denise (Wakeema Hollis)…and Isaac, Violet suggests it is time for Christina to make her own way. Shocked, the young woman surprises everyone, later leaving for New York without a goodbye.

In present day New York, Mae grapples with her mother’s distance, but that letter she left her fills in many blanks and her dad Louis (Courtney B. Vance) encourages forgiveness. But the end of that letter holds another surprise, her mom guiding her behavior when Mike leaves for London.

The romances are consummated after eventful evenings, Christina and Isaac’s in New Orleans, Mae and Mike’s during a power outage in a hurricane. Andy and Rachel’s easy togetherness comments upon Mae and Mike’s skittishness, counterweighted by Peter and Denise in 80’s Louisiana. Violet and Christina may have different reasons for inserting distance with their daughters, but in so doing, they have a profound impact on the course of their lives. Meghie neatly parallels the mother and daughters’ stories, Mae and Mike eventually even following in Christina and Isaac’s footsteps. Even the couple’s musical tastes (she likes Drake, he’s a Kendrick Lamarr fan) circle around in unexpected ways.

The film gets a jolt of humor via Mike’s brother’s family. Kyle Block’s (Lil Rel Howery, "Get Out") introduction serves to fill in Mike’s back-story and when he and his wife Asia (Teyonah Parris, "If Beale Street Could Talk host the couple during the storm, their two daughters cause mischief by talking to Christina about Tessa, Mike’s ex. The production makes lovely use of Kyle and Asia’s brownstone during the storm, a romantic walk in the calm after, the wet street strewn with branches a metaphor for their messy pasts.

Have a notebook ready to jot down the several intertwining relations concocted by writer/director Stella Meghie in her fourth feature film. Here, the stories begin in the 1980s with Christina and her desires to break free and find herself. Along the way, she meets and falls in love with Isaac, who she left later to become a photographer in New York City. And, we later find out, she has a secret.

Jump to the now and Mike’s assignment brings him to Isaac (Rob Morgan), who shows him a photo he took, decades ago, of Christina. The intensity of her gaze in the picture draws Mike to dig into the story. This brings him to Mae and the relationship that sparks between them. Filmmaker Meghie jumps back and forth through decades as she separates the layers and deconstructs the relationships in interesting ways.

One problem I have with romances is that everyone is perfect - gorgeous, talented, never a money problem – and director Meghie is guilty of that, But, when Issa Rae appears on the screen you can see she IS gorgeous and talented - even more than her co-star Stanfield, and he is a darn good looking guy.

The feel good, happily ever after tale benefits from its supporting cast, especially Lil Rei Howery, as Mike’s brother Kyle, and his wife Asia (Teyonah Parris) and their kids. All provide some of the best comic relief in a serious story made lighter and more appealing because of it.