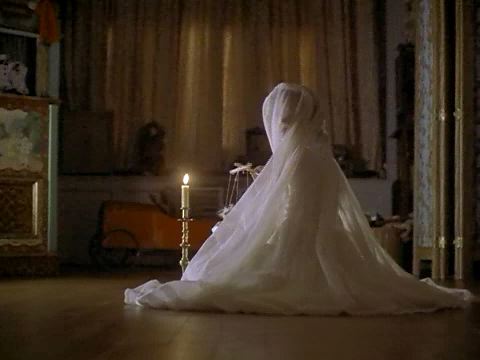 Grace (Nicole Kidman) lives alone in a rambling mansion on the Isle of Jersey with her two light-allergic children Anne (Alakina Mann) and Nicholas (James Bentley) after her servants mysteriously disappeared one night. The year is 1945 and her soldier husband Charles (Christopher Eccleston, "Elizabeth") hasn't been heard from in over a year. After three servants arrive looking for work, strange things begin to happen in writer/director Alejandro Amenabar's "The Others."

Grace is very religious and becomes angered when her daughter Anne upsets Nicholas with tales of a young boy whom she says comes into their room at night. Grace doesn't believe in the supernatural and brands Anne a liar, making her read the bible aloud in the hallway until the girl admits her sin. The new housekeeper Mrs. Mills (Fionnula Flanagan, "Waking Ned Devine"), is more receptive to Anne's stories, though, and questions the harshness of Grace's punishment, especially when Anne hasn't relented after three days. After all, Anne has hinted to Mrs. Mills that her mother may have once gone mad.

Grace accuses Mrs. Mills and the mute Lydia (Elaine Cassidy, "Felicia's Journey") of leaving doors open (they must be locked so as not to allow potentially life-threatening light to enter the room) and says Lydia makes a racket upstairs. But when Grace hears thuds that set the chandelier to swinging while she can see the two women outside, she's forced to investigate. Anne tells her that 'the others' are in an attic room, and Grace discovers shrouded furniture, whispering voices and even a 'book of the dead' that panic her.

Things take stranger turns and it's unclear what agenda the three servants, who showed up unbidden claiming to know the house, have, if any. Grace asks the gardener, Mr. Tuttle (Eric Sykes, "Those Magnificent Men in Their Flying Machines") to search for a graveyard on the grounds and sets out to fetch the parish priest. But she becomes enveloped in blanketing fog and instead finds her shell shocked husband dazedly coming up the road.

Alejandro Amenabar ("Open Your Eyes") has taken a page from "The Innocents" and created a spooky, psychological, gothic ghost story of a time gone by. The children's odd ailment gives him the opportunity to create an eerie mood with dark, shadowy rooms and corridors lit only by the candles and lanterns carried by his characters. Religious symbols, from a covered status of Jesus to Anne's communion dress, become sinister. Creaking doors, whooshing drapes and unexpected footfalls make one shiver. Amenabar's score is also effectively old-fashioned.

Kidman walks a line between being overly strict and warmly maternal. Mounting fear shines from her ever-widening eyes. The performance tends toward brittleness, however. Young newcomers Alakina Mann and James Bentley are both superb, childlike and innocent on the one hand, almost eerily pale and borderline creepy on the other. Anne is willful and rebellious while Nicholas is terrified and trusting. Fionnula Flanagan keeps us off balance with her caring housekeeper who just might know more about the strange goings on that she's letting on.

While anyone who's seen a lot of movies should have no trouble at least partially figuring out the 'surprise' twist ending, "The Others" is still an enjoyable, well made thriller for those who like things that go bump in the night.