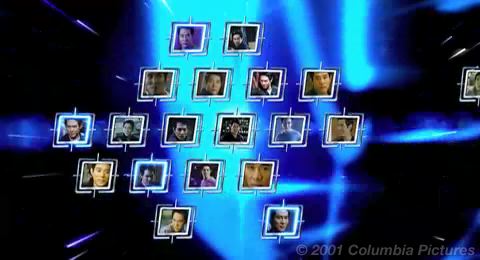 What if there weren't just one universe but many? What if you could travel between these parallel multiverses? And, what if killing your counterparts in each universe gained you their strength, speed and knowledge? This is the ground that helmer James Wong, and his screenwriting partner Glen Morgan, covers in the sci-fi actioner starring Jet Li, "The One."

Martial arts movie star Jet Li plays both hunter and hunted as Gabriel Yulaw, a Multiverse Bureau of Investigation agent who discovered, while doing his job monitoring the protected wormholes between the universes, that if he kills his alter egos in each world, he gains their power and strength. Yulaw has murdered 123 of "himself" and, now, he has only one more to be rid of and become The One. As the killer stalks his last victim, the earthly Gabe Yulaw, he is, in turn, being hunted by two Multiverse agents whose orders are to bring the criminal back to justice for murder and illegal travel through the wormholes to accomplish his deadly deeds. The agents, Roedecker (Delroy Lindo) and Funsch (Jason Stratham), are under orders to bring Yulaw back alive, but with the good Gabe in the picture, the inter-universe cops have problems figuring out just which one is the bad guy.

"The One" is a cross between "Timecop" and "The Hidden" with alien cops hunting power-hungry aliens (or humans from another dimension/time/universe) here on Earth. The draw for this latest showcase of the athletic Li is the martial arts master himself as he plays identical-looking guys who are on either side of the law. As the renegade Gabriel kills off his counterparts he must, single-handed, battle heavily armed cops and avoid the Multiverse agents who are on his heels, too. With his super human powers, though, there is little that can be done to stop the bad guy in his search for his last victim. Of course, a battle royal between the two uber mensch is in the making since good Gabe is also gaining power and strength equal to that of his nemesis..

With all its glitz and glitter, "The One" is really a throwback to action films of the 50's and 60's. With computer-generated filmmaking so prominent in today's F/X extravaganzas I was surprised to note the old-fashioned use of stunt doubles in the fight scenes between the two Gabes. We are so used to modern movie magic to have, in a case like this, Li literally fighting himself, it was oddly entertaining to see the traditional fight scenes without all the computer stuff dragged in. (Although, in other sequences, like when bad Gabe bashes the bejeezus out of some cops with their motorcycles, special F/X rule.)

Jet Li is making a significant move into western action films. He made a splash as the near silent bad guy in "Lethal Weapon 4," then went on to the action/romance of "Romeo Must Die" and, most recently, "Kiss of the Dragon." The actor is working hard to get the English lingo down and delivers his lines with a fluency that is relatively convincing. His forte, of course, is martial arts and the guy is good at what he does.

Supporting cast is near non-existent. Delroy Lindo is in it to provide a name that the audience can identify and little more. Jason Strathan, who was one of the few good things in "John Carpenter's Ghosts of Mars," is notable again as the Multiverse cop hunting the bad Gabe and teams up with the good Gabe in the effort. Carla Gugino, as the earth-bound Gabe's veterinarian wife, does not get a great deal to do. The rest of the cast is basically fodder for the fight scenes.

There isn't much in the way of distinction with the film's techs. The "X-Files" roots of Wong and Morgan are apparent and the result is straightforward, routine action. The script defines the Multiverse as being comprised of 125 individual universes. How the scribes arrived at that number is a good, though unanswered, question. I guess they had to draw a line in the sand for the sake of the story and they picked the number out of a hat. The F/X for travel through the wormhole is akin to the transporter in "Star Trek" but looks a lot more painful. A severe case of jet lag would be preferable. Glimpses into other universes are relegated to minor details like a TV talking head of "President" Gore, otherwise the varied worlds all kind of blend together.

The 80-minute runtime of "The One" makes it pretty painless to sit through. Besides, I got a kick out of the old-fashioned stunt work sprinkled with "Matrix" like action and wire-work a la "Crouching Tiger, Hidden Dragon." It's not a great film but should strike the appropriate note for its target audience.