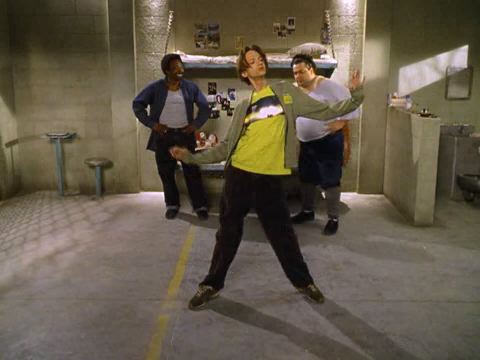 Dizzy Gillespie Harrison (DJ Qualls) is on the bottom rung of school society at Rock Creek High. He's a blip so small that he doesn't even show up on the student social radar - except to be the subject of the cool kids' abuse. He comes up with a plan to get himself expelled and start a new life in "The New Guy."

Dizzy Gillespie Harrison (D.J. Qualls, "Road Trip") is the biggest loser at Rocky Creek High. He's been tied up in a dress with fake rubber breasts and left in the school corridors and suffered the permanent rearrangement of his male member at the hands of an eighty year old librarian in front of a howling crowd. But Dizzy has a plan. He'll get himself expelled from school and transferred so that he can have a fresh start as "The New Guy."

Why Ed Decter, cowriter of the hugely popular "There's Something About Mary," chose to make his directorial debut with TV scribe David Kendall's ("Growing Pains") first produced screenplay is only slightly less of a mystery than why this project was ever greenlit. This sad mishmash of gross out jokes, slapstick, movie parodies and teenage movie cliches plays like a series of unrelated scenes that were thrown into a blender with a broken puree button.

Dizzy's even lower on the food chain that his bandmate buddies, grossly overweight Black kid Kirk (Jerod Mixon, "Me, Myself & Irene"), quiet Asian nerd Glen (Parry Shen, "Better Luck Tomorrow") and perfectly normal Nora (Zooey Deschanel, Quall's "Big Trouble" costar). His efforts to get expelled end up with guidance counselor Kiki (Ileana Douglas in a pathetic parody of her art school teacher in "Ghost World") smothering him with kindness and mood altering drugs. Finally, when he doesn't intend it, an inane act lands him in jail. Cellmate Luther (Eddie Griffin, "John Q") teaches Diz how to be cool through intimidation. He's then inexplicably delivered to East Highland High in Hannibal Lecter shackles by jailors who seem to be in on the joke.

Gil attracts a cheerleading girlfriend (Eliza Dushku, "Bring It On") by beating up her jock boyfriend and being kind to outcasts. She pleads for his help in drumming up some school spirit. Soon their last place football team is #1 and everyone loves everybody else until a bully from Gil's past shows up to burst his bubble.

The talented D.J. Qualls is not only likeable, but makes a convincing switch from hopeless pipsqueak to cool hipster. Every other aspect of this film fails him, however, from the embarrassingly bad performance of Lyle Lovett as his dad to the non sequitur editing style. Dushku's bland line readings and bikini montage elevate her billing over the more interesting Deschanel, but Zooey's kept down by this awful script anyway. Cameos by Henry Rollins, Gene Simmons, Tommy Lee and David Hasselhoff are head scratchers (although maybe they formed a perverse band with Lovett and the instrument props while waiting to shoot). The film features parodies of "Risky Business," "Patton" and "Braveheart," with only the latter released during this film's target audience's lifetime. But then again, "The New Guy's" makers seem to find mechanical bull riding and midgets let loose in barrels fresh fodder for comedy.

Along the way, he gets arrested and ends up in the slammer and is bunked with Luther (Eddie Griffin), a seasoned prison veteran whose stare strikes terror. A former geek, Luther takes pity on the hapless Diz and tells him "I'm gonna take you from bitch to bull." Dizzy Gillespie Harrison is transformed into cool dude Gil Harris and he moves across town to East Highland High Scholl to begin his new life. With the help of his newfound friends at the prison, Gil makes his debut at the school when he is driven up to the door in an armored car and is led in, under Hannibal Lecter type restraint, before the awed student body. But, Gil soon finds out that being at the top of the popularity food change has its own share of problems.

"The New Guy" starts off as a modern Pygmalion tale that should have arced from the geekie Dizzy seeing the need to change himself, or forever be at the bottom of the food chain. It sort of goes this way as Dizzy morph's, with Luther's help, into cool Gil Harris, who can strike fear into the hearts of men (or make the women swoon) with just a look. If the story adhered to a rags-to-riches path, even with the abundant juvenile toilet humor, it may have been a fair to middlin' coming-of-age yarn. But, things take off in too many tangential directions as helmer Ed Decter and scribe David Kendall try to stuff many extras into the story. There are entire scenes that riff the likes of "Braveheart" and "Patton." There is, of course, the obligatory "Big Game" that pits Gil's new school against Diz's old one that is actually an anticlimax the way it is handled.

Penis jokes, bathroom humor, a dwarf tuba player, slutty schoolgirls and some very stupid slapstick are de rigueur for this flick, but none of which is particularly funny. For instance, Gil's arrival under excess restraint at East Highland High would have spread across campus like wildfire but, for some reason, he has to struggle to gain respect - why go through the effort of the spectacular entrance? There are the requisite babes on board led by Watertown, MA, own Eliza Dushku as Danielle - and, as a bonus for the 14 to 24-year old male demographic, an extended, mandatory dressing room montage where the very pretty actress models a succession of skimpy bikinis.

DJ Qualls is a little too odd looking to pull of the metamorphosis from sow's ear to silk purse, but the young actor tries his best and may have succeeded with a better script. Eliza Dushku is definitely a babe, but seems to be mildly pissed through most of the film. Lyle Lovett is particularly horrible as Diz/Gil's dad. Illeana Douglas should fire her agent for getting her the job as the school guidance counselor who thinks that Diz is a troubled youth.

"The New Guy" may appeal to the lowest common denominator but, for me, it registers very high on the stupid-movie scale. It's the kind of film where you resent wasting those 90 valuable minutes of your time.