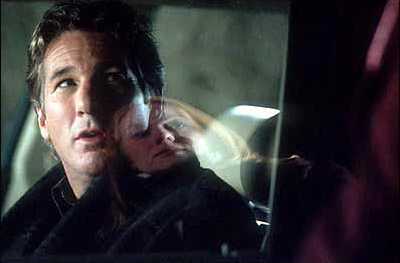 Washington Post reporter John Klein (Richard Gere) couldn't be happier as he and his wife Mary (Debra Messing, TV's "Will and Grace") drive back to DC after finding their dream house. But Mary sees something horrifying and swerves off the road. After her death, John discovers her notebook filled with terrifying images of a dark winged being with red eyes. Two years later, John, en route to an interview, finds himself inexplicably off course by 400 miles in the middle of the night. He's arrived in Point Pleasant, West Virginia and is about to encounter "The Mothman Prophecies."

Loosely based on the purported true events of John Keel's book, screenwriter Richard Hatem has removed the UFO references and moved the story from the 1960s to present day. "The Mothman Prophecies" is sure to spark internet searches for the many sites which relate stories about the Mothman, Indrid Cold and the Men in Black conspiracy which may be related.

Klein seeks assistance at the home of Gordon Smallwood (Will Patton, "Remember the Titans"), but is greeted with a rifle for having arrived for the third time at 2:30 a.m. Police officer Connie Parker (Laura Linney, "You Can Count On Me") defuses the situation and takes John to a motel, explaining that a lot of strange things have been going on in Point Pleasant. John sticks around to investigate and finds that the creature his wife drew is being sighted, mostly around an abandoned chemical plant. The fire chief has been getting strange phone calls which John begins to receive as well. Consultations with a reluctant Chicago paranormal expert, Dr. Leek (Alan Bates), flesh out the history of the mothman as some kind of angel of death, sighted before such disasters as the Chernobyl nuclear accident.

Gere is good as the grieving widower intent on discovering what his link is to the shadowy things which his wife experienced. He may be onto a startling journalistic piece or he may be losing his mind. He has chemistry with his "Primal Fear" costar Linney. The Oscar nominated actress is the voice of reason even thought she's in the midst of an inexplicable situation. Connie refuses to indulge in the growing hysteria and tries to help John work through his grief. Patton makes Smallwood's breakdown moving.

Director Pellington proves once again that he knows how to build suspense and unease. As in "Arlington Road," red lights signal horror and potential evil. Working with cinematographer Fred Murphy ("Stir of Echoes"), who knows how to bring out the intrinsic scare quotient in winter-naked trees with camera angles, and editor Brian Berdan ("Blue Velvet"), Pellington maintains a sense of dread without ever fully revealing the titular mothman. Sound design and music by Tomandandy ("Arlington Road") complement the visuals by jangling the nerves.

The film's flaws are concentrated within its climactic recreation of the Silver Bridge disaster. The screenplay provides a link for Connie to the event that's heavy handed and the sequence is confusingly edited. Still, the film's overall impact remains.

"The Mothman Prophecies" is a difficult film to shake from your conscience when night falls.