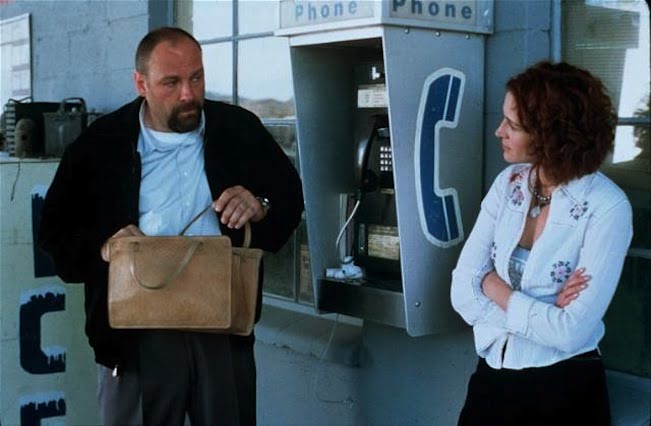 Samantha Barzel (Julia Roberts) throws a fit when she discovers that long-time boyfriend Jerry Welbach (Brad Pitt) is delaying their plans for a Las Vegas weekend in order to do a job for big boss Margolese (an uncredited Gene Hackman). Sam makes good on her threat to head for Vegas on her own as Jerry heads south in search of a prized but cursed pistol known as "The Mexican."

Jerry begins a cycle of dumb luck followed by freakish fate by immediately locating Beck (David Krumholtz, "Slums of Beverly Hills"), holder of the infamous antique, in a Mexican dive, then losing him to a reveller's stray bullet. When Jerry checks in with Nayman (Bob Balaban), he finds out that he's holding the dead body of Margolese' grandson.

Meanwhile Sam heads for Vegas and ends up in the crossfire between an elegant Black stranger (Sherman Augustus, "Virus") who takes her hostage in a ladies' room and Leroy (James Gandolfini, "The Sopranos"), a psychotic hit man sent by Margolese to use Sam as Jerry's completion bond. Leroy plugs the stranger and begins a road trip with the feisty Sam - 'I'm just here to regulate funkiness' he tells her.

Brad Pitt once again proves a real flair for comedy, able to elicit howls of laughter with a simple 'Oh no!' He has loads of chemistry with the Mexican mutt who becomes his sidekick. Roberts and Pitt have one of those 'can't live with them, can't live without them' relationships which flare up into screaming matches every 5 minutes. Roberts is the screamer, hurling such self helpisms as 'now you're blame shifting!' at laid back screamee Jerry. (Too) much has been made of their lack of screentime together.

Technically the film looks (cinematography by Dariusz Wolski of "Dark City" and "The Crow") and sounds (original score by Alan Silvestri, "Cast Away") good. The script, by J.H. Wyman, is problematic however. While individual bits play well enough, the film begins to drag. Wyman gives his MacGuffin its own superfluous subplot (several different takes on the history of the pistol are shown in bleached out home-movie segments), which could have been jettisoned entirely. The film comes to a natural conclusion point about thirty minutes before it has the good graces to end. Then Verbinski and screenwriter Wyman positively betray the audience with their third act treatment of Gandolfini's character. Any buoyancy and good will are lost at that point as "The Mexican" stumbles towards its finish.

Jerry Welbach is a hapless bagman forced to do the bidding of a prominent mob boss. His years of indenture are just about over and he has one last job - head south of the border and acquire a legendary pistol called the Mexican. The only problem is his girlfriend Samantha (Julia Roberts). She wants him to move to Las Vegas with her, now!, or get out of her life forever in "The Mexican."

This much anticipated partnering of Julia Roberts and Brad Pitt has come under some criticism because, for most of "The Mexican," they aren't even together. And, when they are, much of the dialogue consists of Samantha badgering Jerry in a shrew-like and shrill manner, making me wonder why they are even together. Things change for the better when they go their separate ways, but the film then suffers from its real problem - it's too darn long for a light romantic comedy.

This is a problem that is not the fault of the two mega-stars. Roberts and Pitt (along with a fine perf by James Gandolfini) do well enough, but this major star power almost forces the filmmakers, led by director Gore Verbinski, to create a two plus hour tome. As such, there is much padding involved to stretch things out to the detriment of a tight, well-paced story. In Hollywood, it is believed that the people want stars, not a tightly told story, and that's what we get here.

When Jerry heads to Mexico for his one last job to locate the coveted pistol, he is a real fish out of water. The unlucky mob courier sees his little mission as a hit and run, where he does the deed and can get back to Samantha to beg forgiveness. Once he lands, though, things could not go more wrong as he gets the gun, loses it, gets it again, but loses his passport, keeping him in country with no way out. His puppet master back in the States, mob accountant Bernie Nayman (Bob Balaban), for insurance, sets one of his thugs to find Samantha and put her on ice until the gun is delivered. Unknown to Jerry, Bernie is planning his own scam to wrest the gun from his boss, Arnold Margolese (Gene Hackman in an uncredited cameo), the man that Jerry caused to go to prison.

Paralleling Jerry's plight is the strong-willed Samantha's undertaking to move to Las Vegas, get a job as a waitress and become a croupier at a casino. When she hits the road, she finds herself in the clutches of a vicious hit man named Leroy (Gandolfini). This becomes one of the movie's brightest moment as the bad guy and his victim begin to bond, becoming fast friends and confiding their deepest secrets. The chemistry between Roberts and Gandolfini is palpable, sweet and entertaining.

Brad Pitt's Jerry is left to his own simple devices as he makes a journey of both confusion and enlightenment. Pitt has always had a comic flair (check his funny stoner perf in "True Romance") and is up to the task of carrying better than half of the movie alone - well, he does have a bonding relation, himself, with a big, scruffy dog whose favorite toy is a beat up, deflated football. When he finally locates the prized pistol, in the hands of Margolese's grandson, Beck (David Krumholtz), things go bad when the kid is killed in a bizarre shooting accident. They get worse when Jerry's El Camino, the body and the Mexican are stolen.

When Bernie learns of Jerry's dilemma, he thinks he is trying to pull a fast one and sends a hit man, Jerry's friend Ted (J.K. Simmons), to bag the bagman. The two stories - Jerry's plight and Samantha and Leroy's own journey - start to cross paths, frequently, as poor Jerry struggles to get himself and the gun back to the US while trying to save Sam from the mobster. Jerry, it turns out, smells a rat in Leroy. There's a lot more going on leading to the requisite happy ending.

As one expects with a big star vehicle like "The Mexican," no expense is denied in the making. The production team essentially renovated the small Mexican town of Real de Catorce to fit the film's needs and the look and feel put you right with Jerry, south of the border. Stylish lenser Dariusz Wolski ("The Crow") gives a separate color palate to each of the sequences, with the flashback scenes to the making of the legend of the Mexican handled particularly well. They have a look that gives the sequence a nice period feel. The rest of the production equals the photography.

"The Mexican" is another case where the star power overwhelms the story, making more not necessarily better. There is a logical ending at the 96-minute mark that would have, with a little work, tightened up things considerably and made a better movie. As it is, the stars are entertaining, Gandolfini is terrific and there is some good fun along the way.