The Man Who Cried 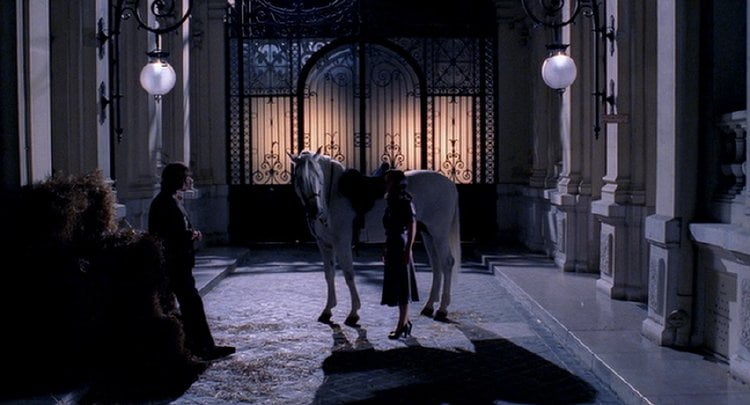 In 1927, a doting father (Oleg Yankovsky, "Mute Witness") seemingly lives an idyllic life with his young daughter (Claudia Lander-Duke) in rural Russia. Convinced by a visiting relative to try his luck in America, he ruefully leaves the tiny girl with his mother (Hana Maria Pravda).  As their shtetl is being burned to the ground, Grandmother gives her to escaping strangers, along with some gold coins and a photograph of her father.  After a horrific journey, she's named Suzie by an English port official (Clifford Barry), discovered to have a singing voice, and eventually lands in Paris (grown up, played by Christina Ricci), but her goal remains America in "The Man Who Cried."

Written and directed by Sally Potter ("Orlando, "The Tango Lesson), "The Man Who Cried" is an odd amalgamation of film making - good performances amidst lackluster and over the top, on location filming mixed with obviously artificial set pieces, and a weirdly titled tale that, while nothing new, somehow remains engaging. It's a survivor story set against a historical background writ from the movie screen.

Suzie, presumed a Brit, gets a job in a cabaret and meets Lola (Cate Blanchett), a fellow Russian out to land a wealthy man. He arrives in the person of Dante (John Turturro), an egotistical Italian opera singer in the stage company of Felix Perlman (Harry Dean Stanton). Lola gets herself and Suzie jobs in its chorus and soon she's keeping company with Dante, (who's most interested to learn Suzie's secret when he spies her father's picture). Suzie gravitates towards Cesar (Johnny Depp), a gypsy of few words who rides a white stallion onto the stage every night as part of the show (much to Dante's chagrin). The gypsy way of life reminds Suzie of her Jewish heritage and Cesar presents an alternative to the quest for her father. But the lines are clearly drawn for these four characters with the onset of WWII and the Nazi occupation of Paris. (Their fate is economically summed up with a crane shot of a vaguely Nazi-ish prop looming over Dante and Suzie, faced off on the stage below.)

Potter opens her film with credits rolling over her heroine (Ricci), fighting for life in a dark ocean (clearly a tank) surrounded by burning debris and water. Fire and mist continue as leitmotifs throughout the film, although what they symbolize is a mystery (the lack of solid ground afforded Suzie?). The steam rising from a bowl of soup becomes the most predominant (and oddly hypnotic) element of a shot. Visually, "The Man Who Cried" is often stunning, featuring slow-mo closeups of Suzie, costumed for an ornate outdoor tableau, or Cesar performing stunts on horseback through the nighttime streets of Paris. A shot of young Suzie stubbornly clutching the heavily framed portrait of her father (it's almost as big as she is) while terror reigns around her is haunting. (Cinematography is by Sacha Vierny, "The Cook, the Thief, His Wife and Her Lover" and "Prospero's Books").

Ricci plays Suzie largely as a passive observer. This, combined with Ricci's otherworldly appearance, makes for an empathetic portrayal of an intelligent survivor who's not what she appears to be. A shy smile for Cesar is hard won and takes on more weight. Blanchett continues to amaze with her ability to transform herself. Peroxide blonde Lola targets Dante like a heat seeking missile and Blanchett does the heavily accented flirt well. She also brings urgency and regret to her character when she must face the inevitable. Depp recycles his role from "Chocolat" as a man of even lesser words. Potter objectifies him, but Depp gets across the simple points - anger at oppression, love for his family. Turturro, however, relies on theatrical posing and grandstanding in a two dimensional performance. Harry Dean Stanton is quietly convincing, lending an air of melancholy to his democratic businessman. Young Claudia Lander-Duke looks like Ricci and her stoicism meshes well into Ricci's portrayal of the character.

"The Man Who Cried" is an off kilter work from a visual, overtly romantic director.