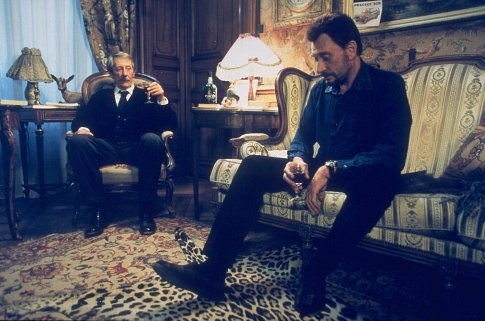 A gangster, Milan (Johnny Hallyday), debarks from a train in a small French town. He intends to knock over a local bank but, until his partners arrive for the heist, he is at loose ends with no place to hang his hat. A chance encounter with a retired schoolteacher, Manesquier (Jean Rochefort), garners an invitation to stay at the home of the older man and it is the beginning of a beautiful friendship in Patrice Leconte's "Man on the Train."

Manesquier (Jean Rochefort, "The Closet") is a refined, talkative, retired schoolteacher living in a small French town in the bric-a-brac stuffed home of his deceased mother. Milan (French rocker Johnny Hallyday, "Les Diaboliques") is a rough,
taciturn bank robber who arrives by train accompanied by Ry Cooderesque strains. The two meet in a pharmacy and Manesquier offers a glass of water, then shelter after explaining that the only hotel is closed to the "Man on the Train."

Patrice Leconte's ("The Widow of Saint-Pierre") latest film will certainly be accused of sentimentality, with its well worn tale of human natures tame and wild drawing out the opposite in each other, but Leconte paints his fable with beautiful detail while his actors create indelible characters.

Manesquier is shrouded in the past, attaining his pleasure from old family paintings, poetry and the Schubert which provides his musical signature. His life is structured, with weekly tutoring and weekend dinners with the woman he shares a chaste relationship with. Manesquier's upcoming heart surgery is a looming potential appointment with death.

Milan moves with the wind in his leather jacket, saying little, his presence accompanied by the music of westerns and trains. He has no allegiances except to the former partners he has planned to meet in order to rob the bank of Manesquier's sleepy town.

As Milan learns the comforts of house slippers and pipe, Manesquier is emboldened by learning to target shoot and stands up to a tough at the local eatery. The domesticity of Manesquier's romantic relationship is goosed by Milan's earthy
presence just as it gives Milan pause to reflect on the female companionship his wandering ways have denied him.

Rochefort, who won the audience award at the 2002 Venice Film Festival (as did the film), makes Manesquier a country gentleman caught within the sleepy spell of his environs, his adventurous side coming out in his incessant conversational queries. He's a master at investing a senior with an impish twinkle without loss of dignity and provides the film's humor. When Milan confesses that he's a convict, Manesquier replies that he'd like to be something between 'fresh out of jail' and a world class soccer player. Hallyday, who built his reputation as a Gallic ersatz Elvis, is now France's answer to Jack Palance, a craggy stone face who conveys his inner thoughts through his very stillness.

Leconte paces his film like two trains gaining speed for a head-on collision, technically merging Manesquier and Milan's distinct color and sound themes until a swirl of surgeon's masks and stocking-faced robbers seal the men's fates together. A fantastical conclusion might be seen as an unearned happy ending that blunts the irony of where the men's original plans take them, but I prefer to view it as a soulful coda.

Unlike Leconte's last U.S. release, "The Widow of Saint Pierre," "Man on the Train" doesn't tackle complex issues. It's a simple tale, albeit one of rich detail, of fate and friendship.

Chemistry is the key to this offbeat buddy movie that puts one of France's great living actors opposite that country's most famous rock star. Craggy-faced Milan comes to small town but cannot find a place to stay (the sole hotel is closed) as he prepares, with his yet-to-arrive cohorts, to rob a small bank. Plagued by headaches, he stops at an apothecary shop to get some aspirin. When he realizes that he'll need water to take the pills he accepts the hospitality offered by Manesquier, a retired poetry teacher.

Manesquier invites Milan to stay at his country home, since there are no hotel rooms available, and learns that his guest is packing guns and has a less than pristine past. Undaunted by the presence of his armed visitor, the old teacher is fascinated by the hard life of his new friend and envies his wild, notorious past. Milan immediately takes a liking to his benefactor and sees, in the teacher, a peaceful, quiet existence that he has come to long for. As the pair gets to know one another a friendship soon blossoms and each undergoes a metamorphosis. Manesquier itches to try on Milan's fancy, tasseled leather jacket and shoot the guns the young man possesses. Milan, on the other hand, is enthralled by the old man's quiet life of books, comfortable slippers and a good pipe.

As the day of the robbery draws near Milan learns that Manesquier is about to undergo surgery for a serious heart condition. Their friendship grows and each finds himself in envy of the other's life - Manesquier, if given another chance, would have been a rough and tumble cowboy in America, while Milan longs for the quietude of his friend's academic existence. But, the gods have defined the paths of their lives and they can only dream of trading places.

Helmer Leconte has a deserved reputation for creating handsome, thought-provoking films that span genres and moods. His dark character study of a peeping tom in "Monsieur Hire" (1989) was a minimalist journey into the mind of a decidedly odd man persecuted for that oddness. "Girl on the Bridge" (1999), starring the incredible Daniel Auteuil and Vanessa Paradis and shot in black and white, is a peculiar love story between an aging knife thrower and his beautiful, suicidal assistant. "The Widow of St. Pierre" (2000), also starring Auteuil, is the based-on-fact period drama about revenge, redemption and the true meaning of love that takes place on the cold, forbidding island of the title. "Man on the Train" is yet another fine work from the mind and heart of this gifted filmmaker.

The real draw to "Man on the Train" are the believable characters created by the pen of scenarist Claude Klotz and the nicely textured spin put on them by Rochefort and Hallyday. The two actors establish their characters as three-dimensional beings that, after their long respective careers, crave a life completely different than they have known. While the story of two disparate men thrust together by circumstance, with the ensuing friendship, may be done to death in the past, the actors succeed in putting a fresh face on the proceeds. Rochefort is always a pleasure to watch and, as Manesquier, he creates a convincing character as the aging academic. Hallyday is a natural as the taciturn Milan who has tired of his life of crime and would just like to break free to a peaceful life.

The dialogue of "Man on the Train" is minimal, especially for Hallyday, with periods of silence between the two men as meaningful as their spoken words. This story is bound to make its way to the shores of America and into Hollywood and it is going to be interesting to see what the mainstream filmmaking juggernaut will do with such a work. Leconte's cut at it is a warm, endearing tale of the unlikely friendship between two very different men from very different walks of life.