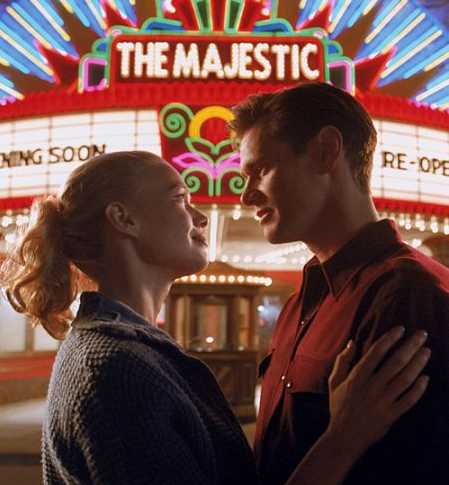 Hollywood screenwriter Peter Appleton's (Jim Carrey) flying high. He's dating the star of his well received B picture "Sand Pirates of the Sahara" and is on the fast track with a new A flick. When he's called to testify to the House Un American Activities Committee his studio contract is put on hold, his girlfriend dumps him and he drowns his sorrows in drink. Driving up the coast, he plunges off a bridge and awakens on a beach with no memory. Brought into a small, idyllic town, he's claimed as MIA WWII hero Luke Trimble, son of Harry Trimble (Martin Landau), the retired owner of "The Majestic."

Director Frank Darabont ("The Shawshank Redemption," "The Green Mile") leaves the prisons of Stephen King and tries to recapture the sentimental, patriotic films of Frank Capra proving once and for all that you can't go home again. While "The Majestic" certainly isn't a bad film, but reaching for 1951 sensibilities in 2001 results in a bland, plasticine effort.

Henry, rejuvenated by the reappearance of his son, decides to renovate his crumbling picture palace and convinces Luke to rejoin the pre-war family business along with candy counter assistant Irene (Susan Willis) and handyman Emmet (Gerry Black). Luke's old girlfriend Adele (Laurie Holden) returns from her law studies in San Francisco and, initially skeptical, gradually comes to believe that Luke is indeed her former fiance. The entire town, who lost over seventy of its own to the war, gathers together in celebration. Only diner cook Bob Leffert (Karl Bury), sporting a hook for a hand like Harold Russell in "The Best Years of Our Lives," doesn't welcome Luke's return.

The Majestic reopens to tremendous response, further reuniting the formerly grieving community, but a lobby sheet for that pirate movie makes Peter's memory come rushing back. While he hides the truth from the dying Henry, he barely has time to confront Adele before the FBI, having found his car, arrive to burst a town's bubble and take a disgraced Peter back to L.A. Adele's law background comes in handy as she tries to persuade Peter to do the right thing, but he just wants his old life back. But Luke Trimble does return just long enough to inspire Peter to a heroism of his own.

Michael Sloane's script borrows bits and pieces from Capra's "It's a Wonderful Life," Sturges' "All Hail the Conquering Hero" and Wyler's post-war film to form this idealistic look at small town life, leaning heavily on a modern day audience's willingness to overlook some huge coincidences. Luke Trimble's picture is Jim Carrey in uniform. Not only are the two men identical but they're both in the movie business. Luke Trimble's gorgeous fiance is still single over nine years later and conveniently, a law student, in 1951 when neither would be plausible.

Carrey is good as the central character, but his conflict isn't extreme enough to show a true change in character - the script conveniently provides a reason for him to do the right thing and get what he initially set out to. Fresh face Holden, a television actress, has some grit behind her pretty face, but Landau is simply a delighted old codger who gets a sentimental death scene.

'You remember movies, but you can't remember your life' marvels one character about Peter/Luke's conundrum. "The Majestic" attempts to capture a more innocent time but never really brings it to life.