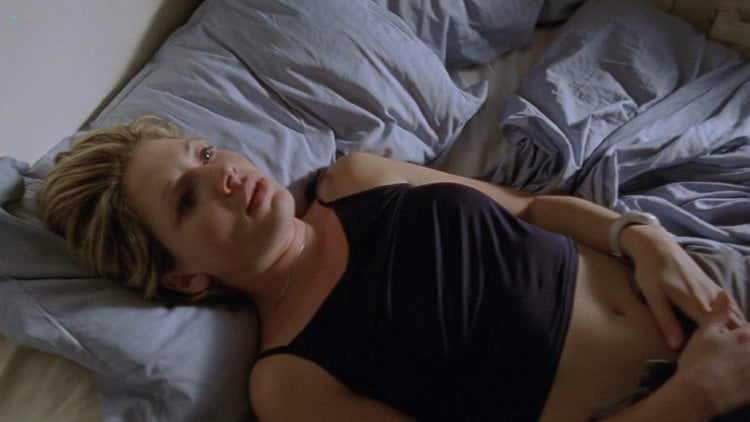 Frank (Aidan Gillen, "Some Mother's Son") is a slacker who spends his time with his buddies and coworkers. He's about to mature into a more settled lifestyle after seeing friends settle down and meeting realtor Ruby (Kate Ashfield, "The War Zone") in "The Low Down."

The third Shooting Gallery series got off to an auspicious start with "Last Resort," but, with the exception of "The Day I Became a Woman" (and potentially the last film of this series, "Eureka"), Shooting Gallery has been aiming low.

First/time writer/director Jamie Thraves' idea was to present someone on the cusp of leaving college days behind, unsure of what he's headed for, while leaving the state of the main character's change ambiguous. What he's achieved is a hit and miss affair that lacks a cohesive style and story.

We see Frank at work making television props for game shows that look like pieces of Mardi Gras floats when what he really wants to be is an artist. Buddy/coworker John (Tobias Menzies) is already straining at the bit, setting off alarms with Frank and their boss and drinking pal Mike (Dean Lennox Kelly). John's taking of a 'roommate' who he's in love with prompts Frank to look for a place of his own. He immediately generates sparks with his realtor Ruby, who'd rather be honest than make a commission, yet his arrested adolescence keeps him from opening up emotionally with her. In the end, Frank moves into one of the pricier places Ruby initially showed him.

"The Low Down" is so meandering I had trouble recalling exactly what happened the day after I saw it. The reason is because little does. The film's characters aren't compelling enough to make this effort stand as a character study either, although Aiden Gillen does bring a truthful bafflement to Frank. Thraves' film sometimes seems like a British 'Friends,' features a 'day-in-the-life' sequence, a fantasy sequence and even evokes "Breathless" in one scene featuring cigarette tossing, but while these individual moments have their payoff, they don't add up. (It should also be noted that Thraves features a completely gratuitous male full frontal nude shot.)

Chilean Director of Photography Igor Jadue-Lillo was frustrated by Thraves' choice of fifty films for him to watch which had no unifying style. Neither does "The Low Down," except that it occasionally looks like it was shot on video by a short person (it was actually shot mostly handheld using 16mm and natural light).

"The Low Down" looks more like a film college thesis than a commercial feature, even for the art houses.

Frank (Aiden Gillan) is fast approaching 30 and he still doesn't know what to do with his life. He spends far too much time working and worrying about his friends and knows that he has to make a change. His indecision is challenged when he meets Ruby (Kate Ashland), a vivacious young woman whose optimistic view of life slowly but surely affects him in "The Low Down."

Feature film newcomer Jamie Thraves writes and directs his observation of contemporary young adult life and love. The film never cuts deeply into the meat of coming of age and the adult responsibilities it brings. Instead, there is a sophomoric approach to man/woman relationships that has the feel of teenage boy/girl romance. We are only given surface treatment of Frank and Ruby, with Frank never evolving from his stalled life, covering his failings with an ever-present "I'm sorry." Kate Ashfield is never given the chance to break out of her object persona as Ruby. I wondered, while watching "The Low Down," why she would waste her time with Frank.

The story starts off slowly, too slowly, as we are posited into Frank's indecisive world. He is looking for a new place to live to get away from his roommate and coworker John (Tobias Mendez), an opinionated slacker who is even more emotionally immature than Frank. Ruby is a realtor who Frank consults to find a new home. In the meantime, his artistic talents are stilted in his job as a prop artist for TV commercials. Frank's road to evolution is punctuated by several incidents where different women, strangers, hit him up for money. Guilt-ridden Frank complies with the requests every time. The last half-hour, where Frank finally grows up and casts aside the past, is the most intriguing and saves the film somewhat.

Commercial and music video cinematographer Igor Jadue-Lillo brings his small screen skills to "The Low Down" in what, quickly, becomes an annoying collection of extreme close-ups using jerky, hand-held camera moves. This brand of cinematic style may work on the short attention span of MTV viewers, but is a hindrance in telling a conventional story. It was, sometimes, painful to watch. Other techs are suitable for the effort.

The Shooting Gallery series of films these past months has provide us with a little gem in "Last Resort," but overall the series has been less than stellar. The lackluster "The Low Down" is a fair entry in the series.